One of the most popular and enduring B-movie genres is the Women In Prison film. It was given new life by Producer Roger Corman with Jack Hill's The Big Doll House (in 1971) and one of my faves is The Big Bird Cage, for many the high-point was the Corman-produced Jonathan Demme-written and directed Caged Heat in 1974. Exploitation fans would usually be treated to a combination of tough and sexy ladies in various stages of undress, involved with light sado-masochism, lesbian wardens and prison guards. Cat fights, near nymphomania and over-the-top violence usually resulted. Sometimes torture and rape was part of the formula too. Some critics have over-analyzed that the films had themes of strong empowered women that reflected the women's movement of the early 1970s. Yeah, sure.. that's what it was all about-Women's lib. 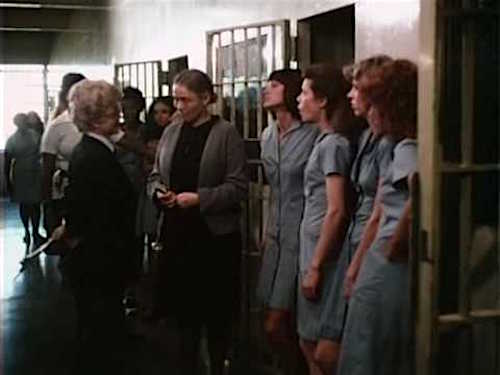 When Ted V. Mikels got around to making his women in prison film in the late 70's, he decided to do things a little differently. The genre was pretty much already played out, so half of the movie is spent showing how several women wound up in prison. It's like two low-budget drive-in movies in one. The first part is a Bad Women Heist movie, the second is a Women's prison movie. There's even a bit of nudity in the film a rarity in most of Mikels' films. And like most of Mikels' films his ideas are way too big for his tiny budget, so only part of what he wants to do is possible. Since he wants to do way too much in several directions we have quite a fascinating mess here.

I won't for a moment lead you to believe there's anything all that original or good about 10 Violent Women I do however really enjoy how Mikels re-works the scraps of several genre films to create a very entertaining movie. He really works very hard to try and keep us thoroughly entertained. If nothing else, you'll probably be mesmerized with how Mikels' mind seems to work. You'll probably be telling yourself: 'he's kidding right? He can't be serious with this stuff, can he?"

There's a strong 1940s era melodramatic undercurrent at work in the film combined with modern exploitation elements and up-to-date plot points including drug dealers and wealthy middle-eastern sheiks. It doesn't make much sense, but things move fast enough you're not suppose to think too much about it-so you don't have to notice. Just have fun-stop thinking. 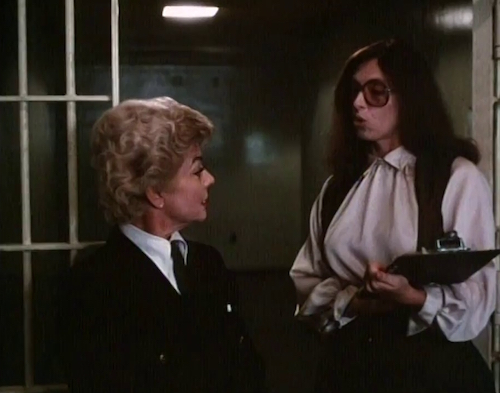 The film begins introducing us to several (6 or 7) women who are working a gold mine. That's right a gold mine. The only male around has decided to blast part of the tunnel they are working in, which several of the women believe is a bad idea because there are other women working in the mines. They are informed it's safe, because the blast is occurring in a shaft no one is working in. Well the blast injures one of the girls and the women are very upset. They wind up not getting paid as they quit. It turns out the male crew chief hasn't been paid either so he tries to grab one of the women before they leave. A blouse is ripped off, and then the women beat him up. These now empowered strong independent women decide they are done playing by the rules and being 'good' girls. What's next you ask?

Well, they plan a fairly complicated jewelry store heist. We don't see the planning of the robbery-which had to have taken quite a bit of time, but instead see how the robbery comes off, which involves disguises, look-outs, decoys, hostage-taking, switching cars and clothes. One of the worst performances I have ever seen in a movie (which is saying a lot) is by Frank Walshe, the actor who plays the owner of the jewelry store. It's something that has to be seen to be believed. Over-acting doesn't begin to describe what it is he does. To show how scared and excited he is, he gasps for breath like he has just finished running a marathon, but a moment later he is fully recovered and yells angrily at his security guard for allowing himself to be distracted by some pretty tourists (part of the gang of course) and allowing the robbery to take place. Also arriving right after the robbery is a wealthy Arab Prince who is picking up a rare, nearly priceless sacred scarab. Of course it's one of the things that the girls have just stolen. This creates complications. 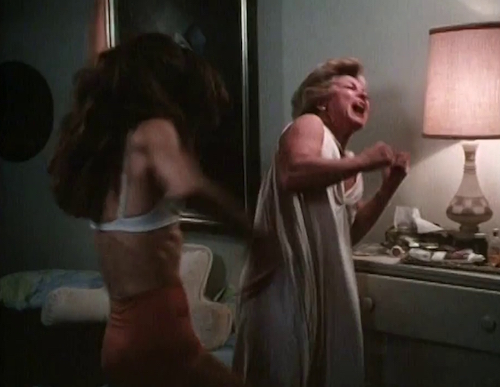 The women it turns out have planned the robbery pretty well, but they haven't planned what to do with their jewels once they have them. They can't think of everything, right? This leads them to meeting with Leo, a Las Vegas based fence and drug dealer. Leo is played by Ted V. Mikels who does a pretty good job playing a nasty sleazy bad guy who wears a huge whale bone around his neck. Instead of money which he apparently lost gambling, he offers the girls about a million dollars in cocaine to sell on the streets. The girls are very upset with this and when Leo pulls a gun on them, well let's just say you'll remember what happens to Leo long after the movie is over and perhaps gain a new respect for stiletto heeled shoes.

I've said too much. The girls now have the jewels and lots of drugs. It isn't long before a really dumb mistake by the alcoholic loose cannon of the group lands several of the women in prison. Hey they weren't very good drug dealers, what can you say? It's a tough prison where the 50 something warden is a sadistic lesbian who has her eye on one of our recently incarcerated thieving women. Eventually the remaining 4 women with a couple of new friends decide they have to bust out of prison. This happens after a fairly benign cat-fight, a shower scene where all but one woman keeps her bra on, and a rather gross lesbian seduction scene. It's almost as if Mikels is intentionally showing cult movie fans just how utterly absurd the whole women in prison genre really is.

There's also lots of wonderful low budget movie trademarks to look for. During a traveling scene look how often the weather and lighting changes indicating what seems to be a couple minutes in movie time was shot most likely over the course of several days and at various times. 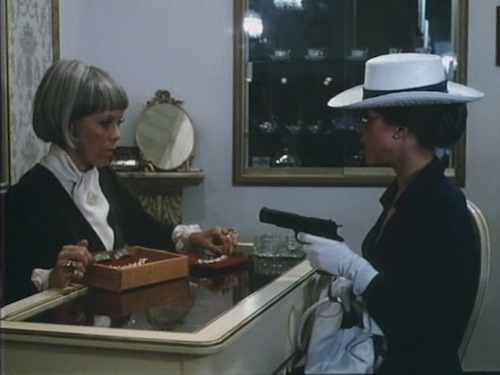 The ending contains another ridiculous crazy logic twist that completely subverts the idea of the tough independent women theme the rest of the movie almost had. And no, the ending has nothing to do with gold mining-that would almost make sense. You think it's hypocritical to have a theme about women finding their independence and becoming empowered through a life of crime, only to have them wind up giving it all up? Mikels never pretends the movie is anything but a brainless fun. The idea that showing women as bad-ass as men in women in prison type films somehow empowers and liberates women audiences is just plain silly anyway. I doubt too many film-makers believe critics who insist there's importance in some of these films beyond their immediate entertainment value. The films are made for guys. The appeal of these films has much more to do with male sadomasochistic fantasy than women's lib. Seeing a scantily clad dressed woman kick ass is sexy and has sex appeal to males in the audience. I'm sure women enjoy watching a guy get an ass whooping from a lady, but in most of these films what you get is lesbian encounters, women fighting women, women taking showers, and women shooting at fairly non-descript men. Often the genre includes rape and torture as well-which would certainly nullify most empowerment claims. 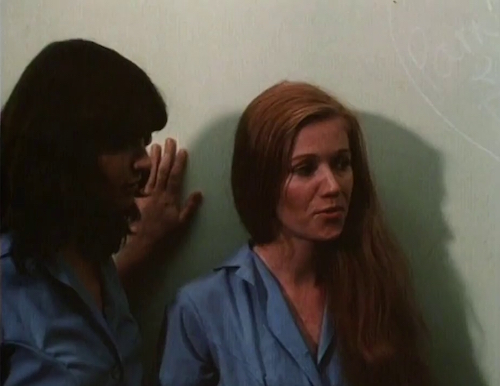 10 Violent Women isn't a particularly violent film (one scene is somewhat gory and memorable) and it has just a brief glimpse of a few pairs of breasts (appreciated). The film is a mess on almost every level and the acting, pacing and production quality is inconsistent. There are also funny little inter-titles sprinkled throughout the film which give the film a sense of style in an old Quinn Martin television show kind of way. Titles that say things like: THE PLOT THICKENS or THE ESCAPE.. Mikels by not paying attention to thematic consistency has actually made a mockery of the women in prison and women with guns genres by creating one of the oddest un-intentional parody films ever made. It's ridiculous, absurd, sloppy and lots of fun.