The Life and Cinema of Ted V. Mikels • OFFICIAL WEBSITE 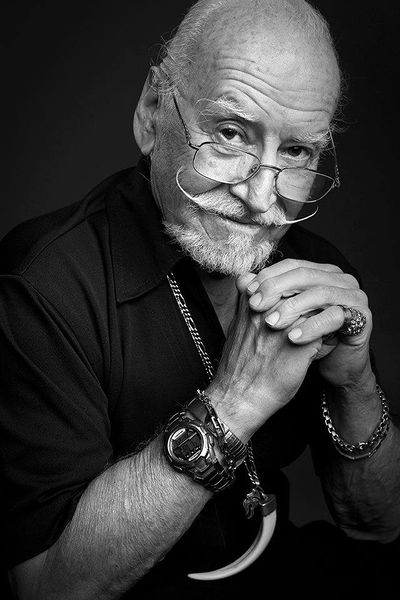 Theodore Mikacevich aka Ted V. Mikels (April 29, 1929 - October 17, 2016) was an American filmmaker of independent cult films. Mikels was also known for his home life, as he once lived with groups of women in a Glendale, California castle.[1]

During his grade school years, he was an amateur photographer who developed his own film in his bathtub. While in eighth grade, he was awarded his first acting role in a film that was to star William Powell, but World War II forced the cancellation of the production. By the age of fifteen, he was a regular stage performer, and developed an interest in filmmaking when he attempted to film his performances. "I figured out that you have to move the camera around to get different angles, and then you have to edit the film when you're done."[1]

In the 1950s, Mikels moved to Bend, Oregon, joined the Bend Community Players little theater group, and founded his own film production company.[2] Soon, he began producing both educational documentaries,[3] and short dramatic features.[4] Additionally, as horseman, archery expert, Indian, and stuntman he contributed to the production of several Hollywood films made in Central Oregon. Notably, during on location filming of The Indian Fighter, he taught studio special effects crews a technique for making flaming arrows appear authentic. Before leaving Bend in the early 1960s, Mikels wrote and directed his first feature length film, "Strike Me Deadly".[5]

Since 1993, Mikels has run TVM Studios, a film and video production studio based in Las Vegas, Nevada. On August 28, 2005, he was presented with a Certificate of Recognition by Nevada Lieutenant Governor Lorraine T. Hunt on the day of screening of his then-latest film, Heart of a Boy, which was the only G-rated film of his career. The certificate was awarded to Mikels for his contributions to the filmmaking industry.[6]

In 2009, a book called Film Alchemy: The Independent Cinema of Ted V. Mikels, written by Christopher Wayne Curry, was published by McFarland & Company.

In 2010, Alpha Video released The Wild World of Ted V. Mikels which is a documentary about the film-making career of Mikels directed by Kevin Sean Michaels and narrated by John Waters.