Following Dawn Of The Dead's meteoric success was Knightriders. A film about a troupe of bikers/stuntmen who perform shows around the country. The film stars Ed Harris (Creepshow) as King Billy, the mastermind and ruler of their Medievil jousting group. He abides to strict codes and principles in order to maintain a level of pureness in their work and not give into corruption and the evils brought by this world. It is a utopian society away from the strict system where most people are caught up in, washed up in the bowers of consumerism and the saturation of the media. A parallel can be made to Romero's experiences outside the Hollywood system and into the harsh world of independent filmmaking. Billy is pretty much a part of a dying breed and so is Romero, a legendery filmmaker that has, until this day refused to work for big production companies (only with Universal - Land Of The Dead). 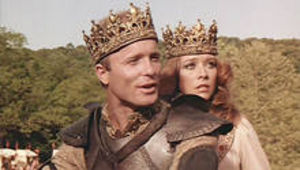 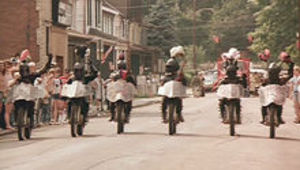 Independence comes with a price however. Billy's medievil show is threatened by corrupt policemen and hollywood producers who garner much interest in the show. After this incident the entire group is literally split into two. Morgan's followers - a group of "dark knights" who have given into their carnal desires and vices. (Morgan is superbly played by (Tom Savini) - and Billy's followers, who still remain faithful to him and the code of principles established by him. The movie crosscuts between Morgan's group - who at first enjoy all the money and women brought by their success. And Billy's group who are faced with financial problems/bankruptcy and a very low group morale. Both learn the harsh realities brought by this world as Morgan grows weary of all the trouble brought in by their success, and Billy realizes that his hopes of living in a world free of hassles and desparity is something of the sublime and can never be.

Morgan returns with only a few of his friends to seek redemption and forgiveness - which is given to him and then some as he becomes his successor for the crown after losing a jousting battle. The film ends on a bit of a sad note as Billy decides to leave his beloved world for good - but not before he exacts his revenge on the corrupt officer from the opening scenes. A brawl ensues in a fast-food resteraunt with a classic scene of Billy pounding the corrupt lawmen to the floor. If you haven't seen this film by the way you should probably stop reading right now....you were warned!

With a distinctive look on his face Billy cruises on his hog on the open road in the following scene - we as viewers can tell by his facial expression what is coming.......he purposely rams into an incoming 18-wheeler. I like to think that this world was just too crazy for him and he never really understood why people did what they did. All the evil that is brought by our own kind and how that self-potential can lead to the destruction of someone else. We kill inadvertantly and we don't even realize it. That's my take on that Romero ending. And that's what I love about his films, your opinion is always valid since no real answer is to his demise is given to us directly. 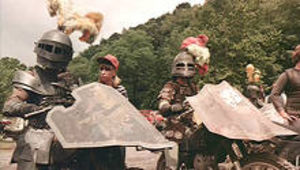 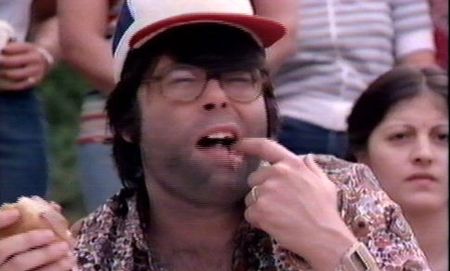 Overall Knightriders is truly a classic film that has gone terribly underrated over decades. The movie has some of the greatest stuntwork ever captured on film, unlike todays films which are overwrought with CGI - the stunts performed here were in fact extremely dangerous, Romero mentions in the DVD commentary how they had immense luck in the production of this movie...."those stunts were crazy" - he says laughing. Romero has been branded as the greatest horror director of all time. But if you ask me, he's one of the greatest filmmakers of our generation.