< The Blood of Fu Manchu 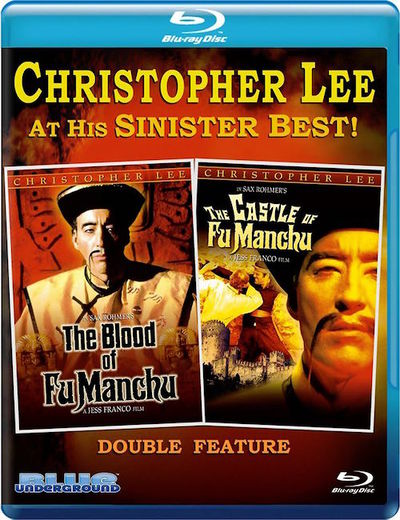 The Blood of Fu Manchu: From his secret lair deep within the South American jungle, international super-villain Fu Manchu (Christopher Lee) and his sadistic daughter Lin Tang (Tsai Chin of The Castle Of Fu Manchu and You Only LiveTwice) reveal their latest diabolical plot for world domination: ten beautiful women are infected with an ancient poison so deadly that one kiss from their lips will bring instant death and lead to a global plague. Now the Asian madman's nemesis, Nayland Smith (Richard Greene of Tales From The Crypt), must desperately hunt an antidote in a savage land where and reign and the ultimate evil lies in The Blood of Fu Manchu.

Maria Rohm (The Bloody Judge) and Shirley Eaton (Goldfinger) co-star in this wild Fu Manchu feature written and produced by Harry Alan Towers (Venus in Furs) and directed by the one and only Jess Franco (Vampyros Lesbos, Eugenie). Also released in America as Released in America as Kiss and Kill.

The Castle of Fu Manchu: Christopher Lee returns as the diabolical super-villain who along with his sadistic daughter Lin Tang (Tsai Chin of The Brides Of Fu Manchu and The Joy Luck Club) creates a fiendish new chemical weapon that will turn the seas into a giant block of ice. But when his Archenemy Nayland Smith (Richard Greene of Tales From The Crypt) tracks the madman's trail of kidnapping, murder and massive global destruction, he himself becomes trapped in Fu's impenetrable lair of cruelty. Can any of the world's top secret agents (including a wild performance by Director Jess Franco) now stop the cold-blooded terror that lives in the The Castle Of Fu Manchu?

Maria Perschy (99 Women) and Rosalba Neri (Justine) co-star in this notorious sequel to The Blood of Fu Manchu directed by Jess Franco (The Bloody Judge, Vampyros Lesbos) that marked Christopher Lee's final performance as the infamous Chinese madman. This definitive edition of The Castle of Fu Manchu has been newly restored from it's original print and packed with exclusive new Extras for a disc full of Fu Manchu mayhem!