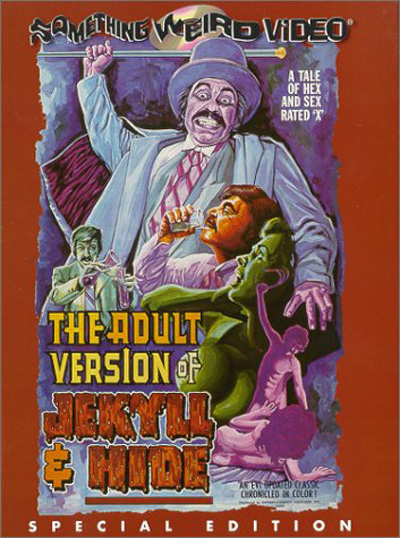 "Judging by the marks and placement, I'd say a medical man." -- A coroner gives a detective his snap judgment as to who he thinks could have strangled a bookseller, in The Adult Version of Jekyll and Hide. After slimy doctor Chris Leeder (Jack Buddliner) is interrupted during an affair with his receptionist (Rene Bond) to go on a shopping trip with his unaware fiancee (Jennifer Brooks), he comes across an old notebook in a rare bookshop. The notebook belonged to the infamous Dr. Jekyll and contains the formula that caused him to become the vicious madman Mr. Hide. Leeder decides it is something he must have. He returns to the shop after hours to retrieve the book but the old bookseller refuses to sell it, so Leeder kills him to obtain it....FULL REVIEW