The Girl From Rio/The Million Eyes of Sumuru (BluRay)

< The Girl From Rio

THE MILLION EYES OF SUMURU: Two years before THE GIRL FROM RIO, Shirley Eaton (GOLDFINGER) also starred as Sumuru, a beautiful but deadly woman with plans for world domination. When a couple of wise-cracking, swingin’ secret agents uncover her scheme to eliminate male leaders and replace them with sexy undercover female operatives, they rush to Hong Kong and enlist the local police to stop her all-female army of assassins known as THE MILLION EYES OF SUMURU.

Richard Wyler (THE BOUNTY KILLER) and Maria Rohm (EUGENIE) co-star in this kinky cult favorite from producer Harry Alan Towers (THE BLOOD OF FU MANCHU) and director Jess Franco (VENUS IN FURS). Also known as RIO 70, FUTURE WOMEN and THE SEVEN SECRETS OF SUMURU, THE GIRL FROM RIO is now presented in a brand-new HD transfer, totally uncut and uncensored with all its eye-popping nudity, torture and lesbianism fully restored from the original camera negative! 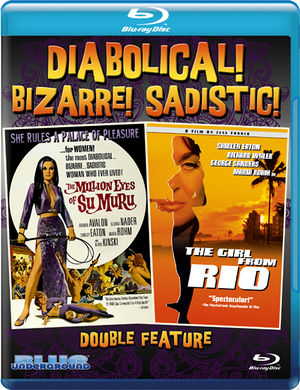 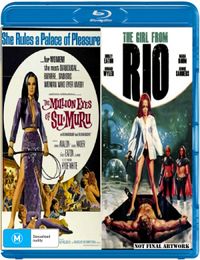