Some shipwrecked sailors are rescued from the island of Beiru located in the middle of an atomic bomb test site. When the survivors claim to have been treated to a taste of the local moonshine by natives of the supposedly deserted island an exploratory expedition is organized post haste. The expedition is headed by shady businessman Clark Nelson but also along for the ride are radiation expert Dr Harada, anthropologist Chujo and stowaway journalist "Bulldog" Fukuda.

Landing on the island they discover lush forest vegetation and Chujo is attacked by "a giant carnivorous plant." They also stumble across 2 tiny fairy princesses and hieroglyphics in a cave, which refer repeatedly to something called "Mothra." Harada, Chujo and Bulldog are happy to leave the islanders to live in peace however Nelson returns with henchmen in tow intent on capturing the fairy princesses and he massacres the natives when they try to stop him claiming his prize. Nelson puts the kidnapped fairies on display to the paying public in a gaudy burlesque stage show unaware that back on Beiru the surviving locals are praying for their vengeful god to awaken and execute a rescue mission.

Hatching from its egg, the larvae Mothra; a giant segmented worm with sky blue eyes and snapping mandibles, makes a bee-line for Japan squishing anything in its path. Chujo and Bulldog desperately try and rescue the fairy twins from the fanatical Nelson before it's too late but even with the army letting loose a barrage of missiles Mothra shows no sign of slowing down. Arriving at the famous Tokyo Tower the giant grub starts squirting out a kind of cotton candy webbing which it fashions into an enormous cocoon. The military wheel out "atomic heat guns" but instead of destroying the creature Mothra emerges in its adult winged form; a beautiful and deadly cosmic moth monster!

What happens next? Shit hits fan. 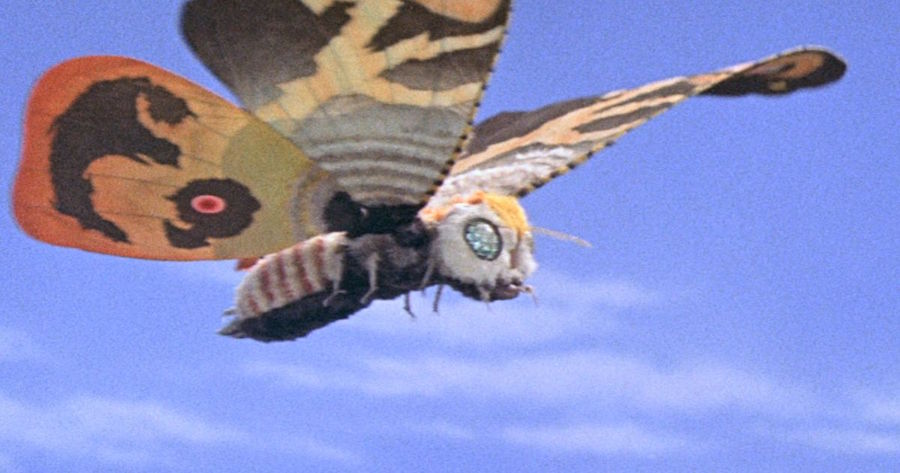 With its lush Tohoscope cinematography and astonishing special effects Mothra really deserves to be seen on the big screen in its full 2.35:1 ratio for maximum awe and astonishment. The scenes of the giant Mothra maggot smashing its way relentlessly through the urban center of Tokyo are superbly realized; the detail on the miniature buildings and vehicles nothing short of incredible. Modern day CGI effects simply fall flat when compared to the phantasmagoric imagination and craftsmanship of monster maker supreme Eiji Tsuburaya.

Mothra is a beautifully charming and fast-paced fantasy, likely to be enjoyed by viewers of all ages, and which will surely feature in any fans' Toho top ten.