Woman in the Box: Virgin Sacrifice/Review

Sometimes the history behind a film production is more interesting than the final product. With Nikkatsu movies they tend to be equally boring. Here however is something out of ordinary. Highly successful star director Masaru Konuma (Flower and Snake, Wife to be Sacrificed) was preparing his latest project, with the green light already given by the studio. The film would be another SM story where a woman who gets captured and tortured, a world Konuma knows better than most other directors. Everything was set to go. Then, at the last moment, Nikkatsu changed their minds. The time was ready for their new roughie line, they thought, and Woman in the Box would be the one to start it. 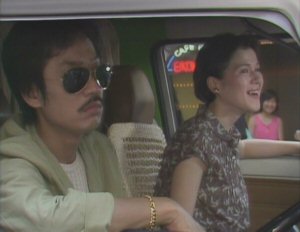 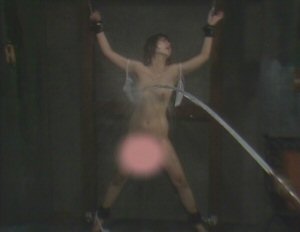 What this meant in practice was that Woman in the Box would be a straight to video hard core sex film. The year was 1985 and VHS players had started to gain popularity. AV was stealing its share of Nikkatsu’s usual pink film audience, and the studio wanted to strike back. ”Presenting to you the most exciting Nikkatsu Roman X rated film”, was the answer. From a historical point of view such twist could be anticipated. Large scale pink cinema was born a few decades earlier when TV had ill-treated the box office numbers, and film industry had to find a way to attract audiences back into the dark cinemas. It’s only natural the genre would meets its fate in similar fashion when the technology takes yet another leap.

Konuma was not happy, not at all. He had been helming ambitious and critically acclaimed genre films since the early years of Roman Porno. Jumping into the cheap hard core sex wagon was not what he had on mind. He pulled out his original scrip and froze the production. Finally, after negotiations with the studio, a conclusion was found. Konuma would agree to deliver Nikkatsu what they were asking for, and in return the studio would finance his original script as a sequel. Woman in a Box 2 would also be a theatrical feature, shot in widescreen, unlike the cheap full screen ”original”.

Woman in the Box Part 1 is pain. For the lead character, and the audience. Recent films like Hostel and Saw have brought up the expression ’torture porn’, but here Konuma tries to live up to the term (which I’m not sure existed back then) in a literal sense of the word. The attempt is doomed as the violence, although mean sprited, takes mostly place outside the frame, and the sex is as censored as usual. Nikkatsu was having hopes of finding a blind spot in the censors’ eye in the video market, but no such ”luck” here. The fogging is so strong you sometimes can’t see the performers head. It’s a shame, as the the lead actress (Saeko Kizuki) has a cute face that is one of the few positives that have found their way into the film. 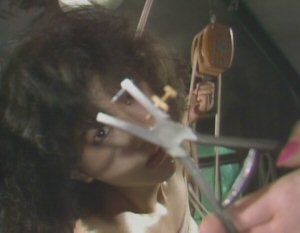 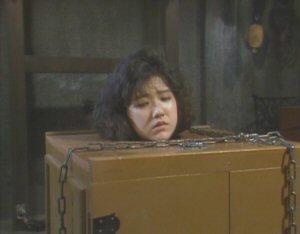 Another, and well, only, thing worth mentioning is the ridiculously cool ending. In fact, I warmly recommend skipping the first 75 minutes and only watching the last 7. Then the seriously bad news; your math is not failing you, nor did I make a mistake with the numbers. Woman in the Box runs 82 minutes. Typically Nikkatsu’s genre movies run approximately 70 minutes, even those that are based on screenplay. Woman in the Box is based on matchbox. It took me four attempts and 2 ice hockey games to finish the movie. There is no storyline, no quality in film making, not even trashy fun. Only sex, sadism and boredom, which in this case are the very same thing.