What it Is, What It Was! The Black Film Explosion of the 70s 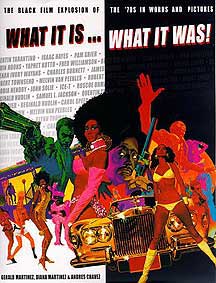 Ever since 1970s black activists coined the derogatory label blaxploitation to describe the likes of Sweet Sweetback's Baadassss Song, I'm Gonna Git You Sucka, and Mandingomovies full of snappy street patter, outrageous pimp suits, and comic-book-style action--debate has raged over whether they are valid popular artwork or just demeaning. Most of the actors, writers, and directors interviewed for this book--'70s veterans like Melvin Van Peebles, Pam Grier, and Fred Williamson as well as current stars Ice-T, Samuel L. Jackson, and Keenan Ivory Wayans--disagree with the label. Their remarks are copiously accompanied by publicity posters for the controversial films. The garish graphics are intended to be the volume's main attraction, according to the introduction, and dating from a time when their kind of thing was still painted rather than assembled from photographs, they're pretty nifty, all right. But the text, especially the contributions of the stars of the blaxploitation genre, makes this a special bit of film history (Booklist).