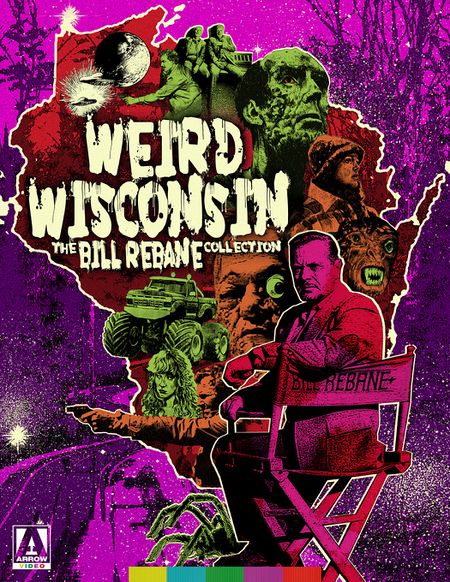 Alien Invasions! Haunted Pianos! Sentient Monster Trucks! Arrow Video is proud to present the first ever collection of works by Bill Rebane, the epitome of an independent regional filmmaker who built his own studio in the wilds of Wisconsin. He acted for Hitchcock, he searched for the arms of the Venus De Milo, he turned a VW Beetle into a giant spider and he's still at work today!

Bringing together six films, all new to Blu-ray and in brand new restorations, Weird Wisconsin: The Bill Rebane Collection packs in a mutant astronaut bothering blissful sunbathers (Monster A Go-Go), a contagion apocalypse as seen from the vantage point of a remote mountain cabin (Invasion from Inner Earth), deadly alien spores from the rocks of Mars (The Alpha Incident), rural gothic and outright horror (The Demons of Ludlow), an eccentric 'body count' movie (The Game) and a comedy smash-'em up that pits three hillbilly stooges against a talking Monster Truck with artificial intelligence (Twister's Revenge).

Loaded with new interviews and extras, this is an essential collection of features from one of America's most tenacious outsider auteurs!

DISC THREE – THE GAME + TWISTER'S REVENGE: Two presentations of The Game (aka The Cold) in 1.85 and 1.33 aspect ratio • Straight Shooter Part 5 and Part 6, two newly filmed interviews about the making of The Game and Twister's Revenge with director Bill Rebane • Discovering Bill Rebane, brand new presentation by historian & critic Stephen R. Bissette about his personal connections with the films of Bill Rebane and their importance to regional film making in America • The Game original trailer • Twister's Revenge original trailer • Stills and Promotional Gallery