Based on a 1961 book written by Kenneth Cook, Wake In Fright tells the story of John Grant (Gary Bond) a bonded British school teacher who has been stuck working in the desolate Outback town of Tiboonda. Grant hates his job and has made plans to visit his girlfriend who lives in the big city of Sydney on Christmas break. After his last class is finished, he grabs his suitcases and hops on a train to the nearby mining town of Bundanyabba or "the Yabba" (as the locals call it) where he'll have a one night stopover before his flight the next morning. As he rides along he has a beer (his first of many in this tale) and daydreams of his beautiful girlfriend emerging from the ocean in a red bathing suit.

Upon his arrival in The Yabba, Grant rents himself a room in a hotel where the front clerk sits in front of a fan, drizzling water on herself in a strangely erotic fashion. Grant then visits a bar to relax and have a drink. While watching the circus of people mingling he meets the lumbering Jock Crawford (Chips Rafferty) a local policeman who invites him to have a few beers (what else?). A few soon turns into several and a thoroughly soused Grant is introduced to a popular gambling spot where hordes of Yabba locals play a simple game called "Two Up" in which two coins are tossed into the air and bets are placed on either heads or tails. Grant throws some money down and has a lucky streak winning a nice bit of cash. He returns to his hotel room in elation and gets an idea to use his small fortune to help pay his way out of his current slavery as a bonded teacher. All he needs is a little bit more cash to accomplish this. He heads back to the game but quickly ends up losing it all. Jock then brings the depressed Grant to a diner nearby and orders him some food to help him sober up. Across the table is Doc Tydon (Donald Pleasence) an eccentric man who asks to eat Grant's discarded eggs and toast. 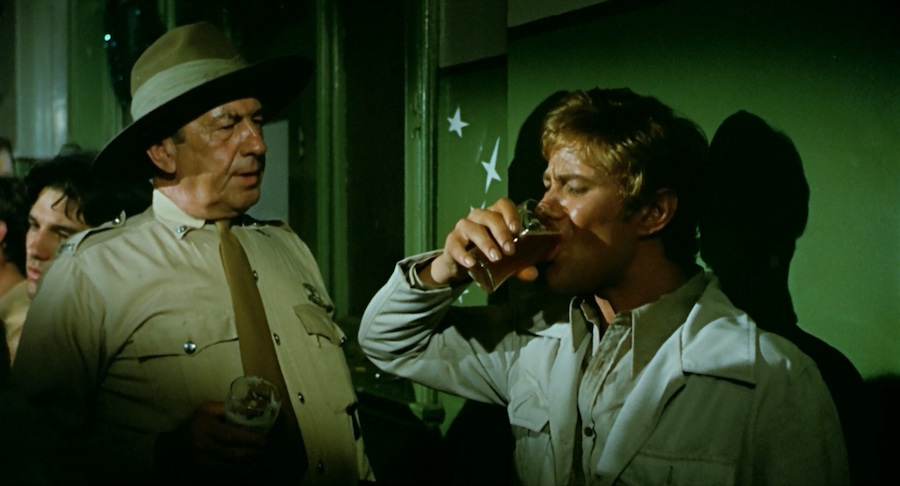 Now that he's stuck in The Yabba with no way to get out, Grant goes to another pub to drown his sorrows. A local man named Tim Hynes (Al Thomas) inquires about what he's doing then basically orders him to drink some beer. After learning Grant is penniless, Hynes invites him over to his home where he's introduced to daughter/maid Janette (Sylvia Kay) and a couple of his rambunctious mates who barge in looking for kicks. This gathering in effect gives us a closer look at the Yabba code of manhood. It's obvious they see outsider Grant as a wimp because he'd rather talk to Janette than drink and cause trouble. Grant and Janette decide to exit the party and go for a little walk. They almost have a sexual encounter but in mid make out Grant suddenly becomes sick and vomits, ruining the mood entirely. When they get back to the house, Doc Tydon is there standing on his head, showing the other guys that you can actually drink inverted due to certain muscles in the throat. Afterwards, Grant ends up staying with Doc at his rundown shack. Grant is hit with a hangover after consuming half of Australia's beer supply so Doc gives offers some pills to make him feel better. Later on, the two are invited by the others on a nighttime kangaroo hunt. The brutality of the manner in which the animals are killed is some of the most shocking footage in the film. The longer Grant spends in The Yabba the more he descends into degradation. The horrors he experiences aren't caused by ghosts or monsters but from a loss of humanity and his own self control.

Wake In Fright is a nightmarish, hallicinatory adventure into a world that is exotic on the surface yet quite disturbing underneath. It's a slow burning study of Grant's vulnerability which plays out like an Aussie version of Deliverance. The cinematography by Brian West is simply stunning with its blazing visuals that convey the broiling temperatures of the Outback. It is contrasted with the cool nighttime scenes that seem like a void that will envelop the characters completely. Kotcheff and West also used a variety of wild expressionistic camera tricks that were influenced by 60s arthouse cinema and they heightened the feelings of paranoia and delirium that Grant experiences.

Director Ted Kotcheff a Canadian native shot the film with a modest budget of $800,000 and it premiered at the Cannes Film Festival where it was nominated for the prestigious Palm D'Or. At the screening a young filmmaker named Martin Scorsese found the movie thrilling and voiced his excitement for it as he watched on in the audience. Although Wake in Fright was rather popular in France where it ran in theaters for several months, it was released in the US under the title Outback and didn't receive much acclaim. The film then faded into history becoming a cult classic for those who had caught it on late night TV in edited cuts. The movie actually caused controversy among Aussies because of it's lurid depiction of the Outback people. Some considered it a bit too close to the truth which was interesting considering Kotcheff was not even a native of the country. Still, filmmakers such as Peter Weir and Fred Schepisi let Kotcheff know that they appreciated him and his stylized vision which gave the Australian film community a nice path to follow.

For decades an original negative of Wake in Fright was nowhere to be found but the film's editor Tony Buckley was intent on seeking one out. After many years of catching leads followed by dissapointments, finally in 2003 he got the news there was an original negative for the film in both the Australian and US Outback versions at CBS Headquarters' Iron Mountain vaults in Pittsburgh, PA. In 2004 the prints were shipped to the NFSA (National Film and Sound Archive) where the restoration began.