Review of the Venom BluRay release by Blue Underground. 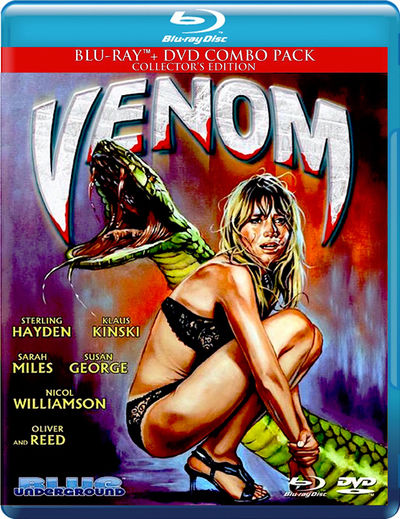 Ruth Hopkins (Cornelia Sharpe), an American living with her family (husband, son and father), maid and chauffeur, in a quaint London townhouse, is about to fly off to meet her busy husband. The minute the mother is away, son Philip picks up a snake from a local shop to add to his collection of pets. What he does not know is that the box was accidentally swapped and now contains the deadliest snake on the planet: a black mamba that was destined to reach the city toxicology institute. At the same time, maid Louise (Susan George) works on a scheme to get the kid's grandfather Howard (Sterling Hayden) out of the house, so that her love interest and family chauffeur Dave (Oliver Reed) can let their accomplice Jacques Mueller (Klaus Kinski), a wanted terrorist, into the house. When a bobby reaches the front door to investigate the snake mix-up, he gets shot by the nervous Dave, and it all goes down hill, as the snake has already been let out of the box, and killed its first victim....

I have to say there are moments in this movie where I jumped out up on my couch. You gotta hand it to them, despite the movie’s troubled making (see its booklet liner notes), it is horrifyingly effective in its thrills. Despite its marketing also, this is not primarily a horror movie. At its core, Venom is a hostage drama set in a London neighborhood, where an international terrorist’s plan to kidnap or assassinate a member of an international businessman’s family goes horribly wrong. They were not prepared for some of the family’s stubbornness, one of their team members (the driver) is an ill-tempered amateur, and of course, there is an unwanted house guest that ruins the day for pretty much everyone. What a great premise. It’s as if Jaws was never really a shark movie, but maybe a political drama about a local election, with a shark complicating things. I love it. 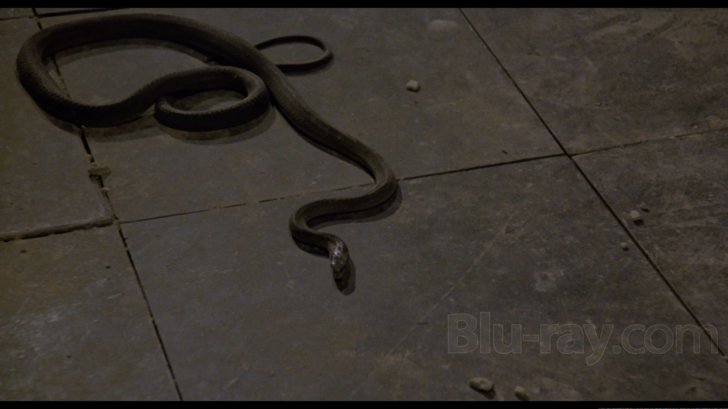 What’s great about Venom is its slow moving pace at the beginning. In that respect, it has a lot in common actually with films like Jaws as it leaves the audience in the dark for quite some time about the actual menace, all the while sprinkling teasers about. For example, right in the very first scene, the little kid reads a book about snakes, yet it is I think almost 30 minutes into the movie that we see the viper strike. And without giving too much away, it's quite a takedown. Snake 1 Humans 0. The confined space of the three floor apartment building (the typically narrow British types) add to the claustrophobia of the film, and the fact that the hostages are trapped along with their captors, surrounded by police (for some reason extremely relaxed folks), and most importantly, they're a) not alone and they know it and b) they are not a great team. This has been one of the main points of criticism of the movie, I know: the villains just seem to be rather dorky and unfit for the job, calling into question the cunning plan and the fact that Klaus Kinski's character is actually supposed to be an internationally wanted terrorist. The mastermind seems to be the maid, but... well. 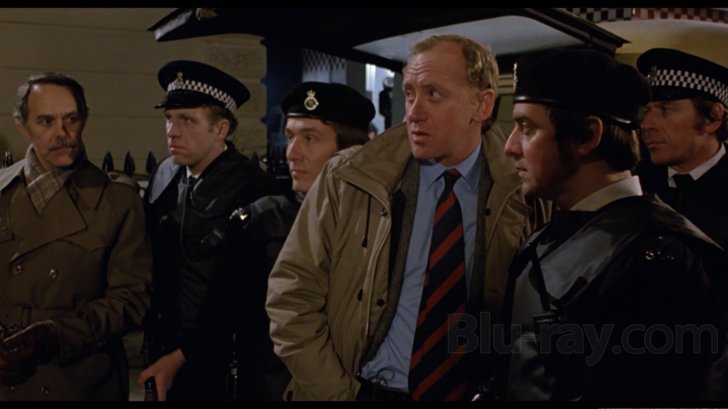 Michael Kamen’s first motion picture gig sounds a bit out of place at first, but then really hits the right notes in a film that just pushes your nerves and makes you jump at the right points. It's a movie that lives of the fact that you're probably sitting at the edge of your seat, covering your eyes whenever there's another one of those rare scenes with the slithering snake, and jumping up when there's a bite imminent. For some reason they didn't overly focus so much on craftsmanship. There's no flashy editing or camerawork, it's a typically economical and sober British production that does its job well without going all cinemascope on the audience. And that with an amble budget mind you. What it could've done a lot more with is character development. For some reason we're tossed into the room with these extremely different types, but we never really get the kid's affection towards animals, or what the deal is with his dad, or what the terrorists' real motivations are and so on. In that department, the movie stays strictly in B territory.

Overall however, it's a highly suspenseful thriller that stays suspenseful until the last second, with a lot of surprising twists, also until the last second, some very good acting (minus a ridiculous Kinski accent), an irritating Oliver Reed and a masterful effort of putting live vipers on a movie set. This really can't be emphasized enough. A lot of creature features just don't work well anymore because the effects just seem outdated and ridiculous. By using real black mambas, they ensured both a high amount of shock value, and also a longevity of the movie that is rare in the genre. Coming back to Jaws, that's still a masterpiece movie, but the shark elicits laughs today, not shocks (well a bit, but he better stay underwater to remain scary). So that's really a plus for a movie that might have some flaws and a troubled production history, but a huge entertainment value. 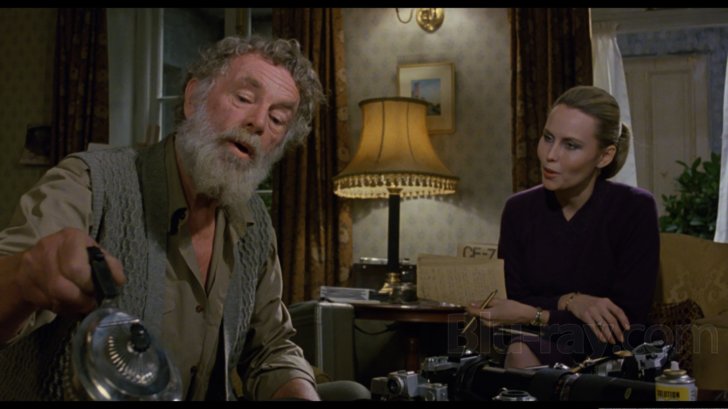 The BluRay boasts a pretty decent transfer, but the expert eye recognises that it’s only a 2K remastering that was done here. In general I think nowadays companies should always opt for 4K from the get go, it’s just a huge difference in the end when it comes to picture resolution and detail. This one looks fine, absolutely, but it’s also not top notch.

In terms of audio, the BluRay sort of matches the DVD’s variety of sound mixes. The BluRay offers the English audio track in a 7.1 DTS HD mix, a 5.1. Dolby Digital mix, and the more down to earth 2.0 DTS track, which I watched the movie with, since I do not have surround sound equipment. I have done some digging and it seems some others are amazed by the spatial mix of the 7.1 track, so give that a try if you have the equipment for it.

The disc is a bit light on extras, they are the same as on the DVD. Aside from the liner notes, see below, there are some trailers and spot, some 70 or so promotional pictures, and essentially the really interesting audio commentary from the previous DVD release by the film’s director Piers Haggard, moderated by Jonathan Sothcot (?), and there is also someone else, but because he mumbled so much I didn’t get the name. Now, it’s not one of those commentaries where and enthusiast goes on and on until the screen goes black. This is an informative, but sometimes quiet, track that I think could’ve done with a more curious moderator and just more talking. 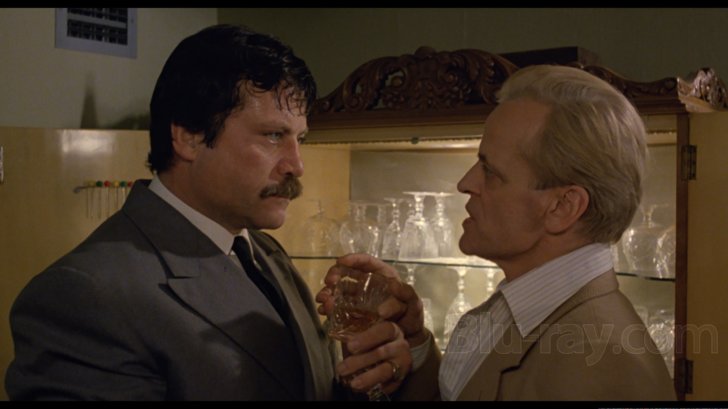 The 20 page booklet is a must-read, not only because Michael Gingold (editor of Fangoria) expertly chronicles the complicated history of the project, but also because it goes a bit into the film’s potential rivals of the snake attack genre. The movie almost starred Sean Connery, was almost directed by Tobe Hooper, Kinski chose this over Indiana Jones, and the movie opened to lacklustre box office returns, only to gain a following on home video over the years. A very interesting read on 11 pages.

All in all, I am so happy I saw this. Look over a few weak spots and it might be one of the best creature films ever. Very entertaining, and the BluRay is worth every penny if you're interested.

Thanks to Blue Underground for supplying us with a review copy of the disc. I took the liberty of lifting some screenshots from Blu-Ray.com, as I don't have the equipment to take those myself. They are scaled down.