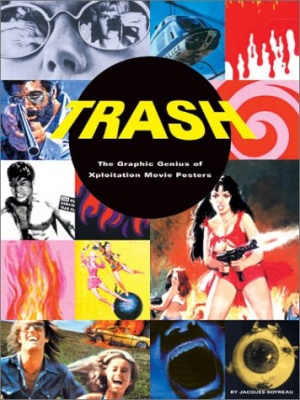 If you love cult films and all the great poster art that was used to promote them then "Trash: The Graphic Genius of Xploitation Movie Posters" is the book you've been looking for. Trash contains 142 pages of some of the most eye catching and explosive exploitation poster artwork released in the 60s and 70s. The book covers many of the most exciting Grindhouse-Drive In genres including Sexploitation, Blaxploitation, Hixploitation, Nazisploitation, Horror, Kung Fu, Drugsploitation and much more! Being a graphic artist and Grindhouse junkie myself, I was thrilled to peel through the pages and see posters from some of my favorite cult films such as the Boulting Brothers' British psycho thriller Twisted Nerve (1968), the Good Ol Boy classic White Lightning (1973), Jack Hill's seminal Blaxploitation hit Coffy (1973), the brilliant technicolor nightmarish dream of Dario Argento's Suspiria (1977), Lucio Fulci's ultra stylized gore classic Zombi 2 (1979) and John Carpenter's post apocalyptic adventure film Escape From New York (1981). The book is brimming with the kinds of imagery you just dont see anymore in movie artwork. What made Exploitation posters so fun was the fact that they were created mainly to make the films seem even more attractive and exciting than many of them actually were. Of course many Exploitation genre films did indeed live up to the hype their posters conveyed. The posters and trailers were specifically made to drive people to the theaters and drive-ins. Today we get the same old Mr Movie Voice talking over completely dull trailers with the same old programmed pop song being played.

When these lower budget genre classics were being made, it was a different time. There were no DVD players or VHS tapes. The producers relied mainly on promotional campaigns featuring incredibly energizing trailers and of course, the poster art which would be displayed on billboards and in movie theater lobbies. These films were the true gems of outrageous cinema. Whether you were driving to an all night Horror marathon at a Drive In in the suburbs or a Sexploitation Fest at an inner city downtown Grindhouse in NYC, what you'd see up on the screen was wild, out of control, over the top and downright exciting.

Trash not only gives you lots of beautiful exploitive poster art, but author Jacques Boyreau gives you some nicely written, informative introductions to each of the Exploitation categories that are broken up over the 100 plus pages. I can't reccomend this book enough! Thrill to the sights of some of the most enticing works of promotional art from the days of yesteryear when Exploitation was KING!!