The Yin and the Yang of Mr. Go/Review

I love digging into film history like this! It's time for Psychedelic Celebrity Cinematic Train Wreck!

Thankfully, this film was kind of swept under the rug without hurting the careers of the stars involved and only providing amusing side stories to the biographies, but it's the type of cinema wreck that has all of the ingredients of something that fans of bad films will love, especially those who are into that mind melting stew of Late 60's Swinging Cinema cooked by someone who read the recipe wrong and did not care if something was missing in the preparation. Only in an era that unleashed such films like Skidoo, The Big Cube and Candy can anything like this be created. 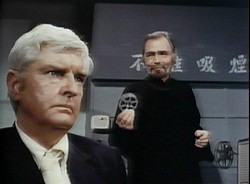 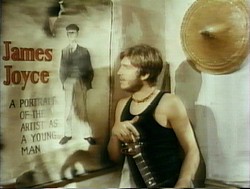 Time for the checklist: Cheesy Bubblegum Buddhism for that New Age kick complete with Buddha being the "Narrator" through someone who slightly sounds like Christopher Lee that explains the plot's mystical life-changing Third Eye Theory to the audience? You got it! Music that sounds like Up With People recording a Psychedelic Concept Album? Painfully right! Editing that made everything else in the Bad Psychedelic Wipe Out category look like Ben Hur by comparison? Yes, as the print on the DVD I saw was barely surviving so that I could not even tell if it was an official edit! A plot that went all over the place and back? As pieced together as the editing led by a character that was suppose to resemble a deserter seeker of the 60's who instead turned out to be an irritating slacker and fool...who just happened to be working as an agent for the CIA who also wound up working for Mr. Go. It's all a confused "Mind Blowing Yah!" (See the movie to know what I mean) perfect for a WTF Night at the Movies. 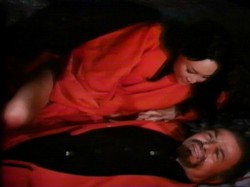 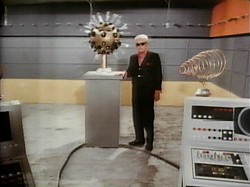 Y Y Go (as in Yin Yang Go...already we're in craptastic land!), played by James Mason with a look that he was possibly trying to hide in a haze to get him through this mess, is the center of an international intrigue involving getting the plans for an anti-missile device created by Robert Bannister (Hayes), who's brought down via shot down aircraft to meet this "Power Broker" of sorts. Go is the sort of Passive Aggressive type that will not keep his captive around, an action criticized by his lesbian aide, Zelda (Kaye), but while letting him know that he did have some secrets about his character that would later show up in this tale. To help him, he finds a connection with his acupuncturist, The Dolphin (Meredith) who charges him three times the price to get the information on his enemies. As for Bannister, through the miracle of not being really careful with the story, we also find out that the scientist has the power of quick healing from having his face bandaged up at one point and then quickly healed up a few minutes later when he meets up with Tah-Ling, who's rooming with the wanna-be Ex-Pat "Next James Joyce," Nero Finnegan. 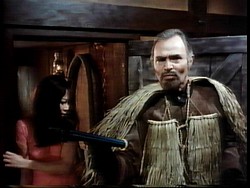 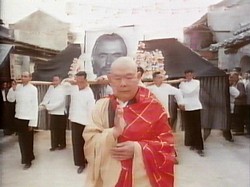 Seeker/Poet/Slacker Nero Finnegan (Oooooh, how literary!), played by Jeff Bridges whose character at least comes off believable as a Bratty jerk that one would more likely meet in real life, is living with his dancer girlfriend Tah-Ling (Tsu), with the hopes to have a career in writing to follow in the footsteps of James Joyce only to be brought into the story working for Mr. Go by finding Bannister and getting some secret footage of his alternative lifestyle, something leading to Nero getting a little aggressive with the submissive inventor, ready to be used as the final part in Go's obtaining of the anti-missile device plans. Here's where the editing throws things off - The discussion between Go and Finnegan about their plans to blackmailing Bannister is covered up with the film's ultra cheesy music losing the viewer in any understanding as to what it's all about, and thanks to some footage obviously added on in the last minutes of the production, CIA agents (Broderick Crawford and others) are getting ready to send someone to look for Bannister while letting the viewer know that Nero is an Ex-Pat who's also an agent for the CIA...after being introduced to Nero by a narrator earlier, the audience is as confused as the actors in these added on scenes possibly were. With this CIA connection to the aspiring poet not fleshed out, it's completely forgotten about soon like the one "job in drag" Tah-Ling hinted about when Nero meets Mr. Zimmerman that could have added another dimension to this messed-up tale. 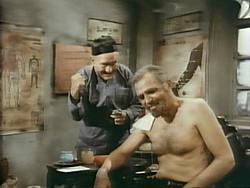 When CIA Agent Leo Zimmerman (McGowran) comes into the picture, he's on the trail to find out where Nero is hiding by posing as a literary agent who's also a Joyce fan who's read three of Finnegan's published works, leading to the only believable scene in the film as Nero and Mr. Z go nightclubbing and woman-getting through Hong Kong in order to get Nero's trust with the film's other non-hit song "To Be Free" playing on. Although Finnegan let slip his involvement with Mr. Go which was not supposed to be known by anyone, he did catch on to that the meeting was all about. After knowing about the break of trust, Mr. Go decides to kill him (With the audience possibly rooting for the Fu Manchu Wanna-Be), but then "The Third Eye" of Buddha decides to strike his nature and decides to let him live (Possibly to the disbelief of the audience) and plans an escape route for Nero and Tah-Ling, who's caught in the clutches of Zelda back at Mr. Go's place. 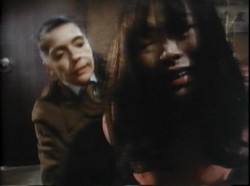 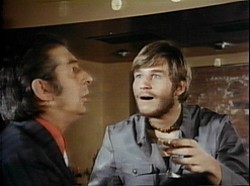 Yes, it all goes down a mess - Mr. Go planning a fake death, Tah-Ling having a weak trip out scene, almost everyone having a chase scene which results in a fight in The Dolphin's acupuncture place (with one having a "Death by backing into a wall of needles"), Nero having his Kung Fu moment rescuing Tah-Ling, Mr. Z getting all drunk near the end making him totally useless even if he had the information, the anti-missile device looking more like something out of a very cheap Hewitt flick or a crap imitation of Star Trek, Nero finding another lover after Tah-Ling decides to go with Go in a big statue of Buddha (Possibly the wisest move in all of the film) while introducing the device to the world at Go's elaborate "Funeral" as the secret becomes public (It's also useful against attacks from UFO's!), and possibly a city wondering as much as the viewer as to what's going on while Meredith and company loon around with the cameras. One more appearance by Crawford and his group, one more time with that theme song that shouts out "The Yin and the Yang!" so many times over as Finnegan and his new lover walk through the spectacle, and it's over with the viewer's mind in total disbelief over what happened in the last 89 Minutes.