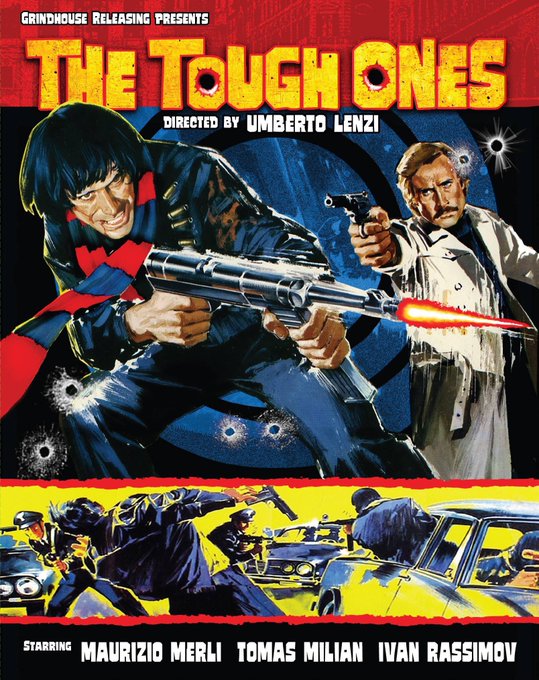 Set in hustling, bustling big city Rome during the turbulent mid 70s, The Tough Ones stars the blonde, mustachioed Maurizio Merli (Convoy Busters) as Inspector Leonardo Tanzi, who is clearly patterned after Clint Eastwood's renegade cop Dirty Harry. Tanzi, like Callahan, is a guy that can see that the criminal world is running amok and needs to be cleaned up by any means necessary. His main target is a mysterious underworld figure named Ferrender but for some reason this character is never an actual part of the movie outside of being mentioned a few times.

Tanzi's fellow officers like the Chief of Police (Arthur Kennedy) only seem to hinder his attempts to get down to brass tacks by tangling him up in red tape. Then there's Tanzi's psychiatrist girlfriend Anna (Maria Rosaria Omaggio) one of the few open minded people that thinks that crime can be stopped by finding understanding and helping the bad guys after they commit heinous acts. At one point she lets two young punks off the hook after they rob a woman because they come from broken homes. When Tanzi finds out about this, he isn't pleased.

Tanzi knows that the only way to stop crime is to fight fire with fire. He begins as a rather calm, collected lawman but as the story progresses, he gets more and more violent and unruly. The criminals in the film are EVERYWHERE like cockroaches and Tanzi seems to be the only one in exterminator mode. Just to start there's the group of ruthless bank robbers that are taking down scores all over the city as well as the snotty rich kid and his gang of leering rapist thugs. So Tanzi has to contend with them all by himself and he does so without hesitation.

Of course the king of the baddies in this tale is the late great Tomas Milian (Almost Human, Emergency Squad) who gives a captivating performance as Vincenzo Moretto aka "The Hunchback", a crippled crazy talking goon that steals every scene he's in. He's a perfect colorful (that awesome bright, long red and black scarf!!), over the top foil for Merli's rather subdued, stoic portrayal of Tanzi. We get to know Moretto, who goes from a cow belly slicing meat worker (??) to deranged robber on the run. He's just magnetic and his physical performance and sense of humor really fill the film up with excitement.

Italian genre fans will also be happy to see the iconic, sneering face of Ivan Rassimov (Man From Deep River, The Strange Vice of Mrs Wardh) who makes an appearance as a scummy drug dealing pimp named Tony that gets his ragdoll floozy hooked on heroin. One of several action highlights has Tanzi chasing Tony across a rooftop and getting into hot water when he loses his footing. Merli was known to do a lot of his own stunts, and this is one example.

The direction by maestro Umberto Lenzi and cinematography by Federico Zanni are just spectacular and with Grindhouse Releasing's remastered hi-definition BluRay you can really appreciate the beautiful shots and photography on the screen. The movie takes a little while to get moving but once it kicks into gear its a non stop barrage of punch ups, beatdowns, sideswipes, draggings, car chases and shootouts. The Tough Ones really is a cinematic smorgasbord of action delights that will hold you in its grip the entire running time.

After seeing a wide variety of polizio films over the years, I can honestly say that Roma A Mano Armata aka The Tough Ones ranks up with the best the genre has to offer. A whiz-bang, crackerjack crime film from the days when movies really went for the jugular.

PICTURE: Presented in (2:40:1) Widescreen: Is this the greatest the film has ever looked on home video? We can assuredly answer that with: YES! The overall transfer is superb with colors and clarity at their apex. The 70s Italian crime genre has never really gotten its proper due in America and the BluRay market needs to remedy that with more stellar restored titles like this one from Grindhouse Releasing. Give us more! We love em!

AUDIO: The Blu Ray offers the following options for your listening pleasure: DTS-HD 2.0 - While the Blaxploitation films were getting funky in America, the Polizio films were doing their thing in an equally rockin manner. The Tough Ones has a truly badass score by maestro Franco Micalizzi. It's the perfect audio accompaniment to the hard hitting, head crackin, ball bustin beatdowns happening onscreen.

ALL EYES ON LENZI - The Life and Times of the Italian Exploitation Legend: An extensive documentary on the filmmaker's prolific career as a journeyman who worked in a variety of genres including giallo, cannibal films and poliziotteschi. Featuring interviews with Lenzi, actor Giovanni Lombardo Radice and cinema scholars Calum Waddell, Rachel Nisbet and filmmaker Scooter McRae.

Audio Commentary by Mike Malloy (Eurocrime! The Italian Cop and Gangster Films That Ruled the 70s) - Who better to give viewers the lowdown on this film than Mike, the guy that made a truly great documentary on the polizio genre? You'll get a nice introductory education on the Euro-Crime (poliziotteschi) genre, and a ton of cool information on the casts & crews involved in the many Italian based movies produced in the 1970s.

Music For Mayhem - Umberto Lenzi and Franco Micalizzi: The jovial filmmaker and composer got together in 2010 to sit down and discuss the lasting legacy of the films they worked on together including The Tough Ones, The Cynic, The Rat & The Fist, Syndicate Sadists and others.

Citta Frontale - Roma on Location: An extensive look at the urban geography of The Tough Ones. Produced by No Shame Films

UMBERTO - Interview with Director Umberto Lenzi: The late genre filmmaker discusses his beginnings in the film industry and more.

THE REBEL WITHIN - Interview with Actor Tomas Milian: The late great character actor talks about his childhood and entry into acting.

BEAUTY AND THE BEASTS - Interview with Actress Maria Rosaria Omaggio: The co-star who plays "Anna" talks about how she got into acting & more.

CORRADO ARMED TO THE TEETH - Interview with Actor Corado Solari: The co-star that plays "Albino" talks about working with Umberto Lenzi and more.

BRUTAL CITY - Interview with Actress Maria Rosaria Riuzzi: The co-star that plays the rape victim discusses her work in European genre films and working on The Tough Ones.

THE REBEL AND THE BOURGEOIS - Interview with Actress and Costume Designer Sandra Cardini: The co-star that plays Sandra (sister of The Hunchback) talks about working on the film with Tomas Milian and director Lenzi.

VODKA, CIGARETTES & BURROUGHS- Interview with Screenwriter Dardano Sacchetti: The writer of the film talks about his career and working with Umberto Lenzi.

THE GODFATHER OF RHYTHM - Interview with Composer Franco Micalizzi: The master composer discusses his work on the film.

THE FINAL WORD: Pour yourself a glass of J&B (the Italian genre film liquor of choice), put this BluRay on your home theater system and get transported back to the inglorious, no holds barred era in Italy where the REAL mafia and the police were at war. The late great Umberto Lenzi delivers a pulp crime actioner in big and bold style, the way the Italians did everything in genre cinema. The Tough Ones is as tough and cool as they come. This special extra jam packed 3 disc BluRay/CD set is a must own for genre aficionados. Grindhouse Cinema Database highly recommends this gem.

Special Thanks to Bob Murawski at Grindhouse Releasing. Buy the BluRay now at Amazon.com