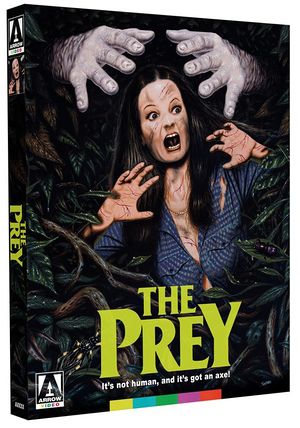 “It’s not human, and it’s got an axe! One of the most underrated efforts to hail from the slice-and-dice boom, The Prey at last emerges from the VHS wilderness in a brand new 2K restoration from the recently unearthed original camera negative.

Three young couples set off into the mountains for a weekend of climbing, drinking and lovemaking. But little do they know that they are stumbling into the terrain of a fearsome predator – a wild man, horrifically burned as a child many years ago in a fire which engulfed his gypsy camp and left only him alive. Now he roams the woods in search of his next human prey.

Filmed in 1979-1980 – making it a contemporary, rather than an imitator, of the likes of Friday the 13th – but not released until 1984 when it was picked up by New World Pictures, The Prey is a unique woodsy slasher gem ripe for reappraisal in this extras-packed, 40th anniversary edition!

DISC TWO – INTERNATIONAL & COMPOSITE CUTS: Brand new 2K restoration of the International Cut featuring the infamous “gyspy flashback” footage, added at a later date by the producers without the approval of the original filmmakers • Composite Cut combining footage from both the US Theatrical and International Cuts, for the ultimate The Prey fan experience! • Extended Outtakes reel – 45 mins of never-before-seen outtakes”