The Night of the Howling Beast/Review

Paul Naschy’s adventure as the accursed werewolf in La Maldicion de la Bestia (aka Night of the Howling Beast among other titles) follows a two-year hiatus since he last appeared as Waldemar Daninsky in 1973’s Curse of the Devil. Portraying the doomed werewolf for the eighth time, Naschy involves Waldemar with a group of scientists exploring the mountains of Tibet after a previous team of explorers is killed by a Yeti in the same area. After receiving proof of the mysterious beast’s existence in the form of a shaggy Yeti scalp that arrives to them through the mail(!), Waldemar, and his good friend Professor Lacombe, along with the professor’s daughter Sylvia and a few disposable characters, arrange an expedition in hopes of capturing a real-live Yeti.

Guided by a wild-eyed climber who Daninsky finds huddled inside an opium den(!), the group sets out into the snowy mountains searching for their Yeti until a fierce snowstorm waylays the expedition. Waldemar and the guide set out ahead, searching for a passable route, but not long afterwards, the guide starts screaming about demons and runs off into the snow, leaving Waldemar stumbling around in unfamiliar terrain. Daninsky eventually discovers the mouth of a cave and ventures inside where he finds two brunettes in animal skins who nurse him back to health and treat him to some cave-babe lovin’. However, Daninsky’s turn of good-fortune quickly comes to a queasy end when he starts exploring the cave and spies his two girlfriends chowing down on a variety of human body parts! Waldemar had to be thinking, “Ewww! I just slept with those two!”

Fearing he’s next on the menu, Waldemar attacks the cannibal queens while they worship some type of ancient sarcophagus topped by the figure of a fanged warrior. Naschy stabs the two meat eaters with an arrow, causing them to crumple into a pile of bones. One of the gals bites Waldemar in the chest during their struggles, and before you can say “stop-motion facial hair,” Naschy is soon writhing under the transforming rays of a full-moon, sprouting hair, and attacking anyone in sight as his bloodthirsty werewolf alter-ego. Surprisingly, the blinding snow and ice encountered when the expedition began is suddenly replaced by more hospitable deciduous forest by the time Naschy escapes from the cave. For the remainder of the movie, characters traipse around without coats over rocky terrain and babbling streams with nary a pile of snow in sight.

Meanwhile, the rest of the group has been besieged by a group of bandits led by the region’s tyrant, Sekkar Khan. After engaging the marauders in a gun battle, all but the elder scientist and his young daughter Sylvia are wiped out. Sylvia manages to escape through the woods, leaving her father in the hands of bandits who lead him to Sekkar Khan’s fortress.

In a remarkable twist of movie coincidence Naschy literally wakes up next to the doctor’s daughter after inadvertently saving her by devouring a group of bandits who were about to attack her the previous evening while in werewolf mode. Both of the lost travelers are befriended by a kindly monk and his assistant who offer them shelter in their monastery. After noticing Waldemar’s bite mark, the monk pulls Sylvia aside to caution her that her friend is suffering from lycanthropy and that only the one who loves him can save him by either administering the healing powers of a plant found in the region, or by plunging a silver dagger into his heart during a full-moon. 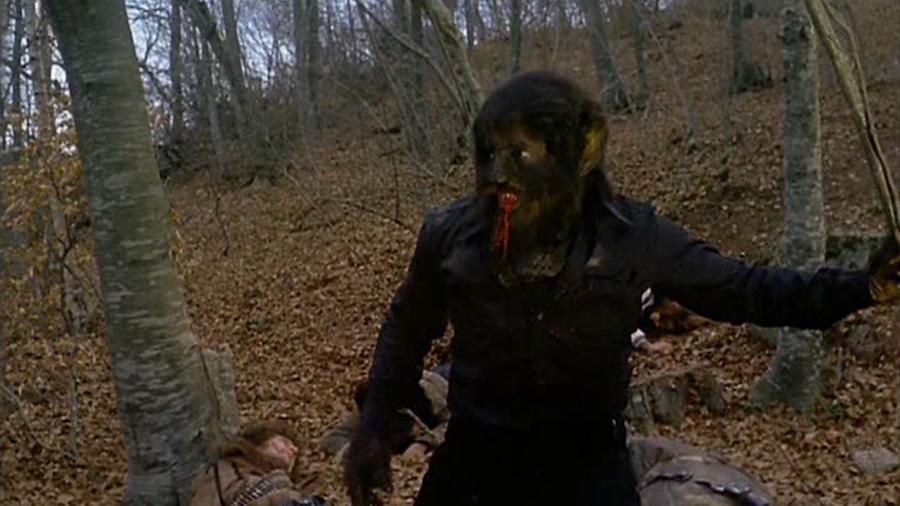 During the final third of the film, attempts are made to re-combine two disparate branches of plot development; the first involving Waldemar’s adventures once he finds the cave and becomes infected with lycanthropy, the second detailing the remainder of the expedition and their attempts to survive the attacking bandits. Daninsky, Sylvia and her father eventually convene at the complex of Sekkar Khan where they run into Wandessa (Silvia Solar). Wandessa is a witch, treating Khan for skin lesions, a gruesome process that involves peeling the skin from conscious female prisoners and placing the bloodied strips against Khan’s afflicted areas. Wandessa takes a shine to Waldemar, stroking his chest and planting a kiss or two against him while purring into his ear that she has plans for him – all while Waldemar remains chained helplessly to a dungeon wall. Wandessa then treats him to a live demonstration of her unique method of skin care, showing off her dominance and control over anyone who enters Khan’s fortress.

Syliva escapes her prison cell with the aid of a handful of angry female prisoners who find and release Waldemar. Daninsky and Sekkar Khan face off for a violent confrontation that ends with Khan falling into a spiked room hidden beneath the floor. Wandessa meets her own grisly demise at the hands of the pissed-off female prisoners who pin her to the floor while their leader stabs her multiple times with a spear right between the legs; attacking what they perceive as Wandessa’s source of wickedness?

Khan’s fortress ends up in flames while Waldemar and Sylvia escape the fiery wreck. Nighttime falls and a full moon peers through the clouds. Suddenly a Yeti attacks Sylvia; Daninsky meanwhile reacts to the moon by turning into a werewolf, and the battle of beasts begins. Naschy rises victorious from the seriously brief and anti-climatic fight after tearing the Yeti’s throat, although he’s also injured and lies bleeding in the snow a few steps away. Lo and behold, Sylvia spies the mysterious plant mentioned by the monk growing nearby. Picking a leaf, Sylvia mixes it with her blood, and shoves it into the werewolf’s mouth; Waldemar transforms back into his old lovable self, and the two walk off into the rays of the rising sun.

Although competently filmed and containing some good ideas, this werewolf tale is too disjointed to offer a completely gratifying viewing experience. Nothing is satisfactorily tied together, several plot elements driving the story are not fully developed or simply abandoned outright. What Wandessa plans to do with the lycanthropic Waldemar is never explained, although she tells him that she has something special in store for him (Well, yeah, aside from a good time…..). The mountain guide is never mentioned again, presumably pulled from existence by supernatural forces. Major errors in continuity, like the sudden change in terrain, are simply ignored. It’s unfortunate that the movie wasn’t handled better during editing because parts of the movie, including Naschy’s encounter with the cave dwellers, and the nasty goings on inside of Sekkar Khan’s fortress work well. One innovative scene shows Naschy’s werewolf jumping on top of a bandit on horseback, the horse riding off into the countryside carrying the two battling men on it’s back!

LaMaldicion de la Bestia appears like a production strapped for cash, the victim of script re-writes or deletions made to save time and money. Some unfortunate choices in editing lead to unintentional laughs. After the monk explains to Naschy that Sylvia truly loves him and would do anything for him, the following scene shows Naschy and Sylvia making love on a bearskin rug buck naked. This unfortunate sequence suggests that Waldemar approached Sylvia immediately after learning how she’d do anything for him, testing her devotion by suggesting that they get it on! Missing from this particular Waldemar Daninsky adventure are the excellent locations and cinematography that usually fuel Naschy’s werewolf movies; a great deal of LaMaldicion de la Bestia’s scenes take place outdoors, interior shots are represented by one or two small sets, indicating again a limited budget. Monastery interiors suffer in particular, represented by a room draped with fabric and lit by dozens of candles which surround a statue of buddha; interiors involving Sekkar Khan’s palace are limited to a single dungeon set, or Khan’s living quarters.

Ultimately, La Maldicion de la Bestia lacks focus; at times it’s an adventure film, the group of explorer battling marauding thieves, other times it’s a monster tale, Paul Naschy battling cave vampires or turning into a werewolf. An engaging story hindered by a piecemeal script throws too many scenarios on screen without bringing all of the elements satisfactorily together for what should have been an entertaining movie ending with battling beasts, true love, and the magical powers of Tibetan plant life.