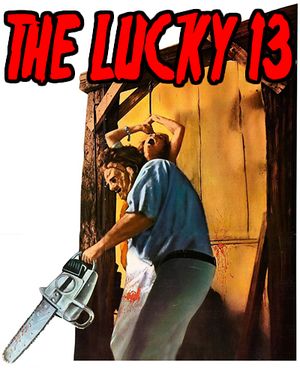 Slasher films are one of the most popular subgenres of all those that encompass Horror cinema. These movies were essentially the high concept offspring of early precursors like Hitchcock's PSYCHO, and the Italian Gialli. Most had a very similar structure and plot which usually involved a killer that was wronged in some way and returns for revenge on those they think are responsible. The stories often focused on goofy teenagers who are too busy having fun at college or a summer camp to notice their dire situation until it's too late. Another main element in Slashers is the character known as The Final Girl. These young women (often tomboys) are not sexually active and have what's referred to as the "investigative gaze" since they aren't preoccupied with their friends' wild activities. The Final Girl also often has a personal connection with the killer in some way and are the ones who have the unique ability to defeat their attackers. Although they were often simplistic in their design, the slashers provided movie audiences of the 70s and 80s with lots of blood n' gory thrills at the theater. We are big fans of these movies and we've picked out 10 favorites from this beloved exploitation subgenre that introduced us to such iconic movie maniacs as Leatherface, Michael Myers, Jason Voorhees, Freddy Krueger and others.

An all girls college sorority house in Canada is terrorized by a mysterious psycho whose trademark is leaving frightening and obscene phonecalls before he kills off the pretty coeds. The film was inspired by a series of murders that took place in the Westmount section of Montreal, in the province of Quebec, Canada, and the urban legend "The Babysitter and the Man Upstairs". Directed by Bob Clark (of Porky's and A Christmas Story fame) this film was one of the main blueprints for the future 80s slasher craze along with early 70s Italian giallo cinema (which came before it) and Halloween which followed it four years later. 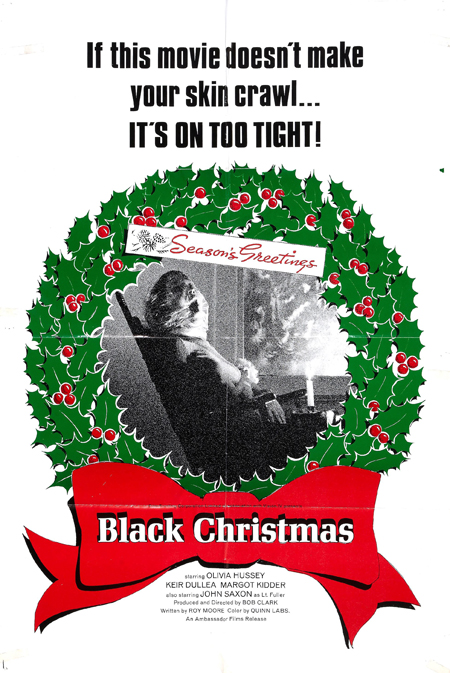 In 1963, a young boy named Michael Myers kills his sister and is committed to a mental hospital. 25 years later he breaks out and heads back to his hometown of Haddonfield to wreak terror on the unsuspecting townspeople. Meanwhile, the local high schoolers including the bookish Laurie Strode (Jamie Lee Curtis) are getting ready for another fun Halloween night, not knowing the terror that's in store. Their only chance is Michael’s longtime psychologist Dr. Loomis (Donald Pleasence) who aims to stop his patient's reign of bloody havoc at all costs. Unlike many of its imitators, Halloween contains little graphic violence and gore. In 2006, it was selected for preservation in the United States National Film Registry by the Library of Congress as being "culturally, historically, or aesthetically significant". 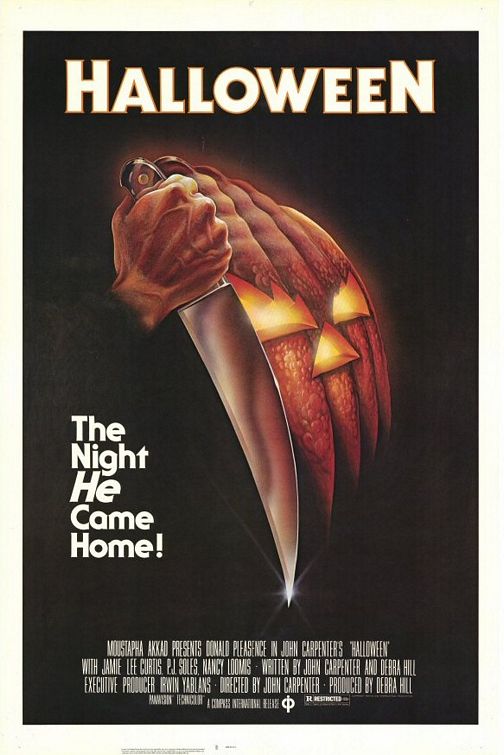 In 1958, a young boy named Jason Voorhees drowned while nearby camp counselors were making love. Ever since, the defunct Camp Crystal Lake has had what locals refer to as a "death curse" due to mysterious mishaps that occurred over the years. When the camp finally reopens decades later, a new group of counselors arrive including Alice (Adrienne King) a happy go lucky teen. As she and the other trainees get the rundown place back in shape, strange things begin happening once again and Alice soon encounters a killer that's on a mission of bloody revenge. TRIVIA: The film was shot in and around the townships of Blairstown and Hope, New Jersey in the fall (September) of 1979. The camp scenes were shot on a working Boy Scout camp, Camp No-Be-Bo-Sco. 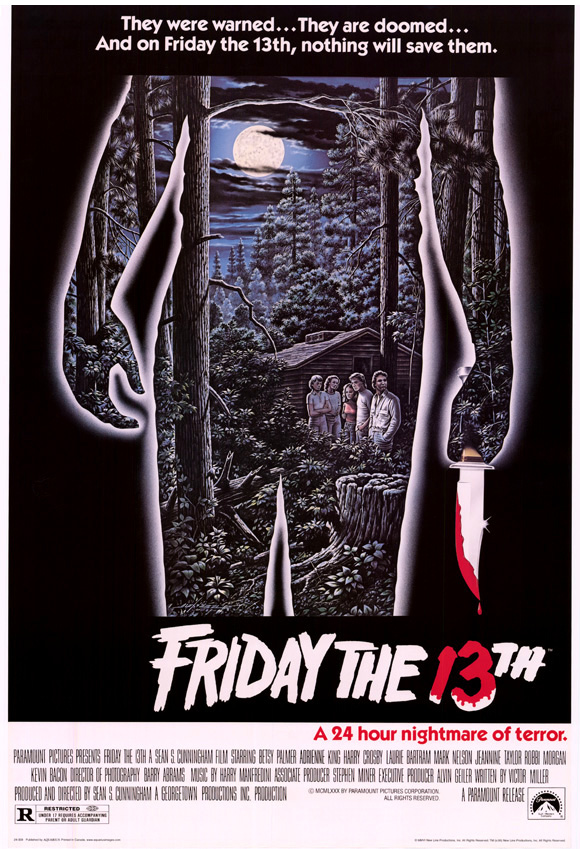 The small town of Valentine Bluffs is ready to celebrate their yearly Valentine’s Day until a psychopathic miner named Harry Warden returns to wreak bloody revenge on the citizens in gruesome ways. This gory, suspenseful, oddly funny Canadian spin on the slasher genre is one of the best of them all. The movie was filmed on location in Sydney Mines, Nova Scotia, Canada. It is infamous for having had 9 minutes cut by the MPAA due to the amount of violence and gore. Though co-producer Dunning confirmed that the excised footage still existed, attempts to release it proved difficult as Paramount Pictures refused to offer an uncut version. 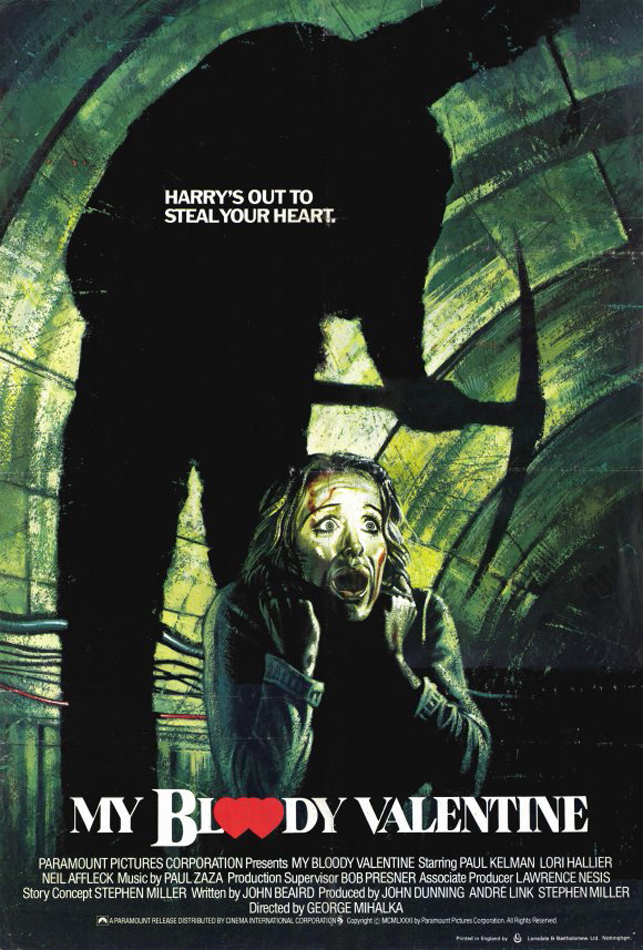 An idyllic summer camp is the target of a badly disfigured maniac named Cropsey who is out to get nasty revenge on the counselors and kids that did him wrong years earlier. A fun, summertime thriller that does an exceptional job setting up the scares and bloody FX sequences (by Tom Savini). One of the earliest films produced by Harvey Weinstein who would go on to form Miramax and The Weinstein Company. The film is loosely based on the upstate New York urban legend of Cropsey, a tale that became popular at summer camps in the 1960s and 70s. It is the feature-film debut of Seinfeld's Jason Alexander along with Fisher Stevens and Oscar winner Holly Hunter. 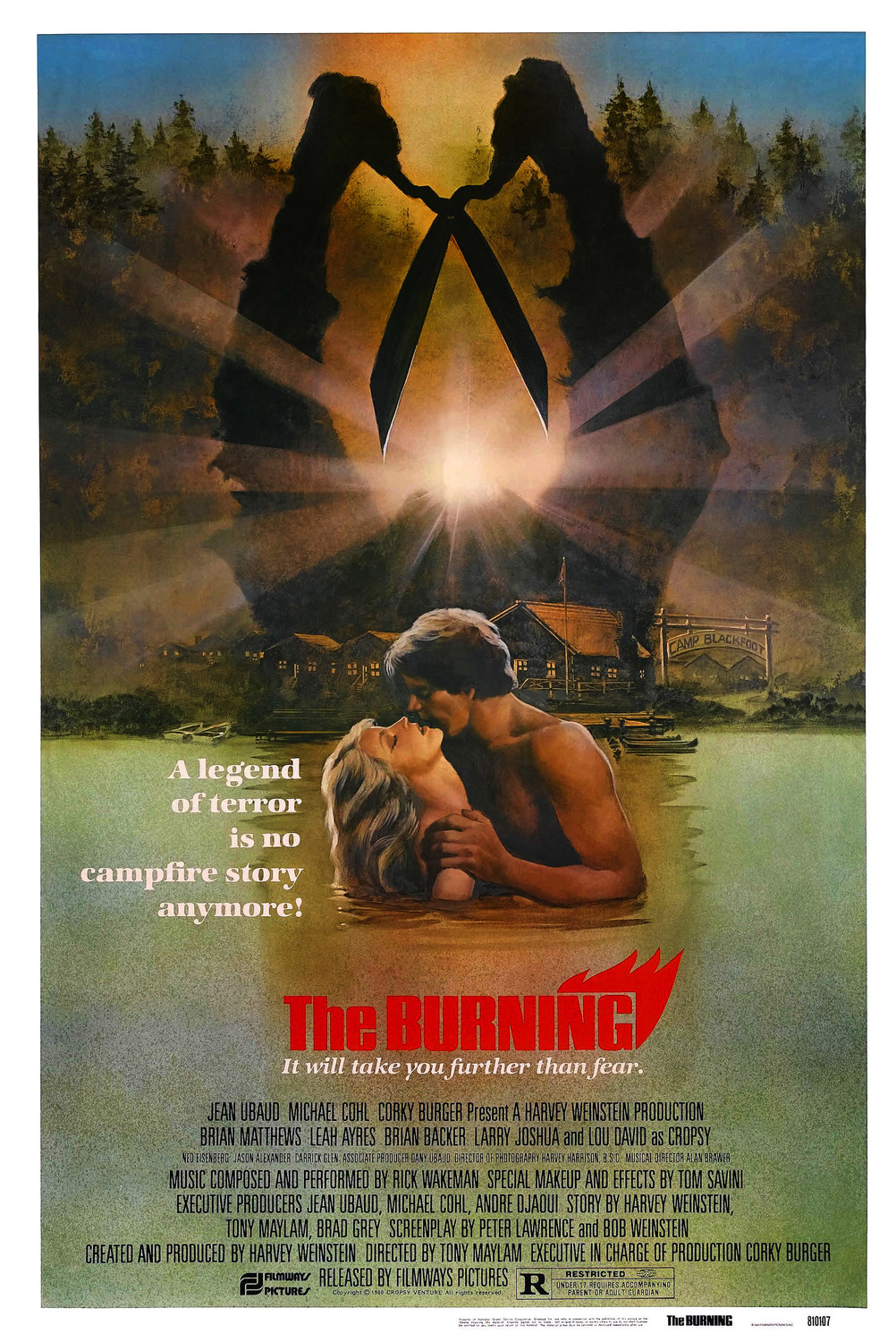 In this twist on Hitchcock's Psycho, a mentally disturbed man named Donny Kohler (Dan Grimaldi) who suffered years of abuse by his cruel mother becomes a flamethrower wielding killer that abducts women and burns them alive in a custom made steel reinforced room. Darkly funny, sicko stuff from the tail end of the disco era that will satisfy slasher addicts for sure. TRIVIA: Despite some respectable critical notices, Don't Go in the House attracted controversy almost immediately because of its graphic depiction of the death of Kohler's first victim, and the central theme of childhood abuse. The film was cut by almost three minutes when it was released in Britain in the winter of 1980.

The late great Joe Spinell delivers a helluva deranged performance as Frank Zito, another psychopath with mommy issues that systematically stalks and kills women who he turns into his personal mannequins. Much like Roger Corman's A Bucket of Blood as well as Don't Go In The House (released the same year) the Frank Zito character is someone we get to know as a person rather than a faceless ghost which makes the story all the more compelling and disturbing. With a tiny budget, many scenes in the film were shot guerrilla style. Tom Savini got the part of the male shotgun victim, because he had already made a cast of his own head. A remake starring Elijah Wood was released in 2012. 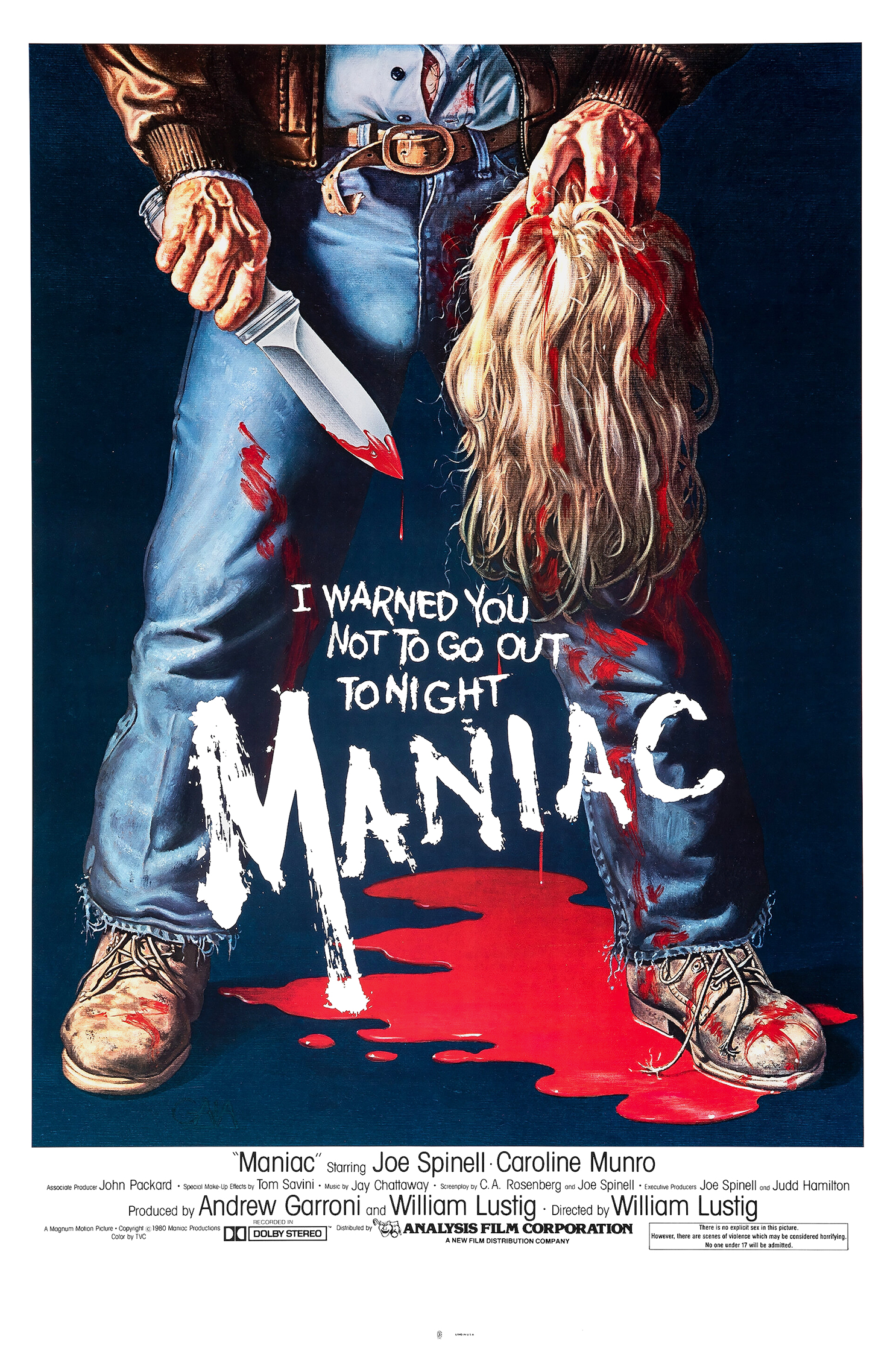 Following the deaths of her family members in a tragic boating accident, a young girl named Angela (Felissa Rose) is adopted by her Aunt Martha. Years later, a teenage Angela and her cousin Ricky join Camp Arawak and not long after, people begin winding up dead. This slasher classic is best known for a shocking twist ending that will have you saying WTF? TRIVIA: The film was released theatrically on a limited basis by United Film Distribution Company on November 18, 1983. On its opening weekend it grossed a total of $430,000. When it opened, it was the top grossing film in New York, beating out its horror competition by taking in almost double the gross of Amityville 3-D. 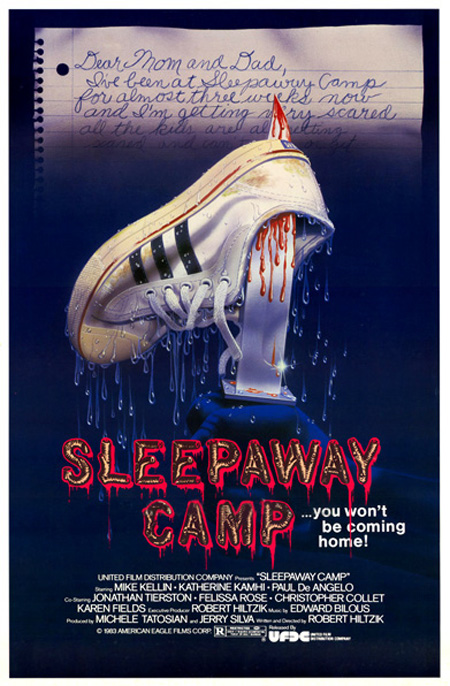 A young boy named Billy witnesses his parents being murdered by a criminal dressed in a Santa costume and is sent to an orphanage run by sadistic nuns who abuse him. Years later, Billy mentally snaps and uses the Santa persona, which has haunted him, to bring his own brand of punishment to all the naughty boys and girls that give him grief. One of the most memorable scenes comes early on in the film when Billy's wacked out Grandpa tells him a terrifying story about jolly ol' Saint Nick. CONTROVERSY: Silent Night, Deadly Night was one of the most controversial films of the 1980s because the ad campaign, particularly posters and TV spots, made significant emphasis on the killer being dressed as Santa Claus. The PTA fought to have this film removed from theaters. 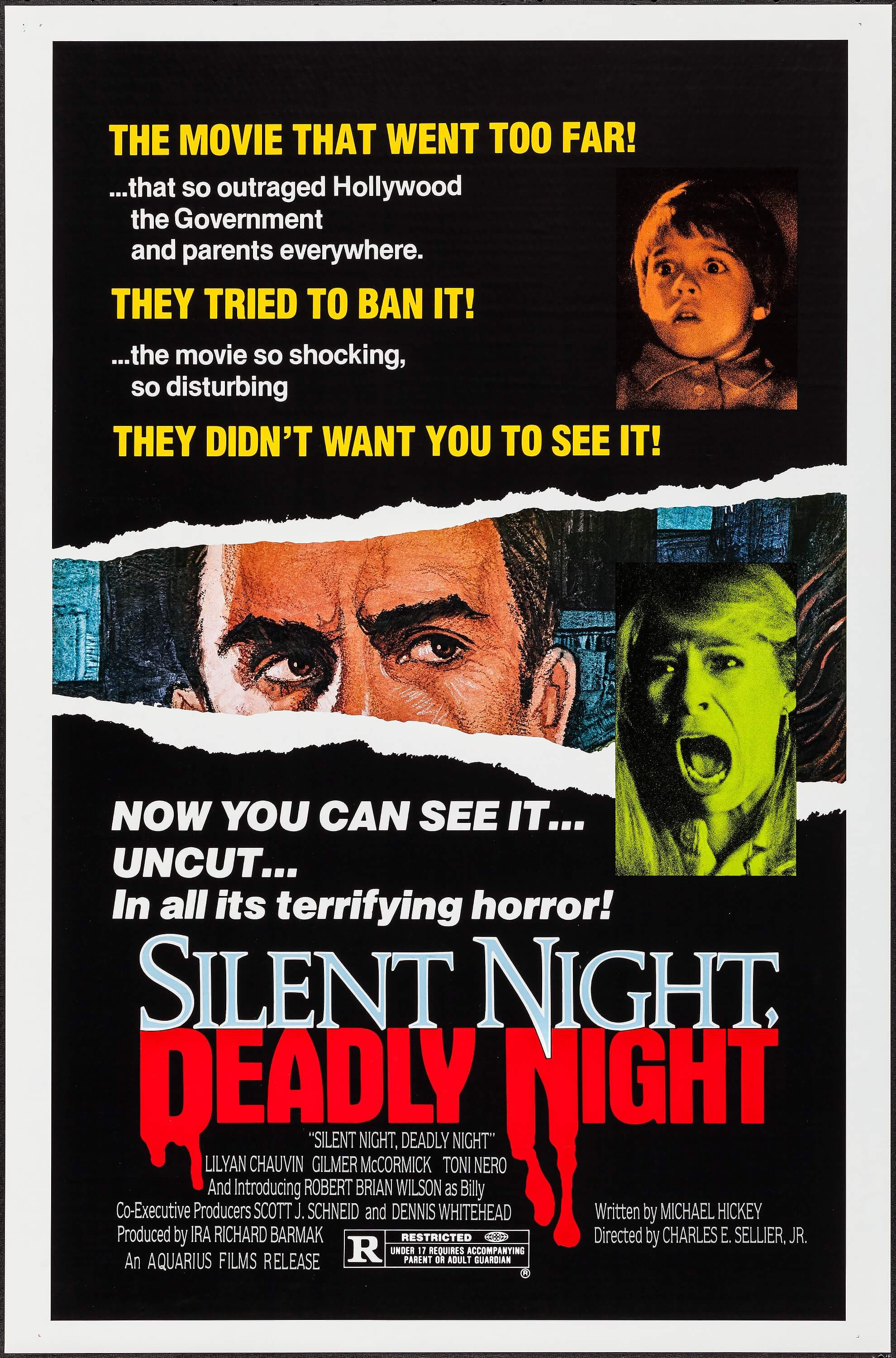 A group of freewheeling Texas teenagers find themselves the victims of a reclusive psychotic hillbilly family that have a strong taste for human flesh in this darkly funny, nearly bloodless, low budget horror classic. Director Tobe Hooper produced the film for less than $300,000 and used a cast of relatively unknown actors drawn mainly from central Texas, where the film was shot. The limited budget forced Hooper to film for long hours seven days a week, so that he could finish as quickly as possible and reduce equipment rental costs. Due to the film's violent content, Hooper struggled to find a distributor. Louis Perano of Bryanston Distributing eventually purchased the distribution rights. 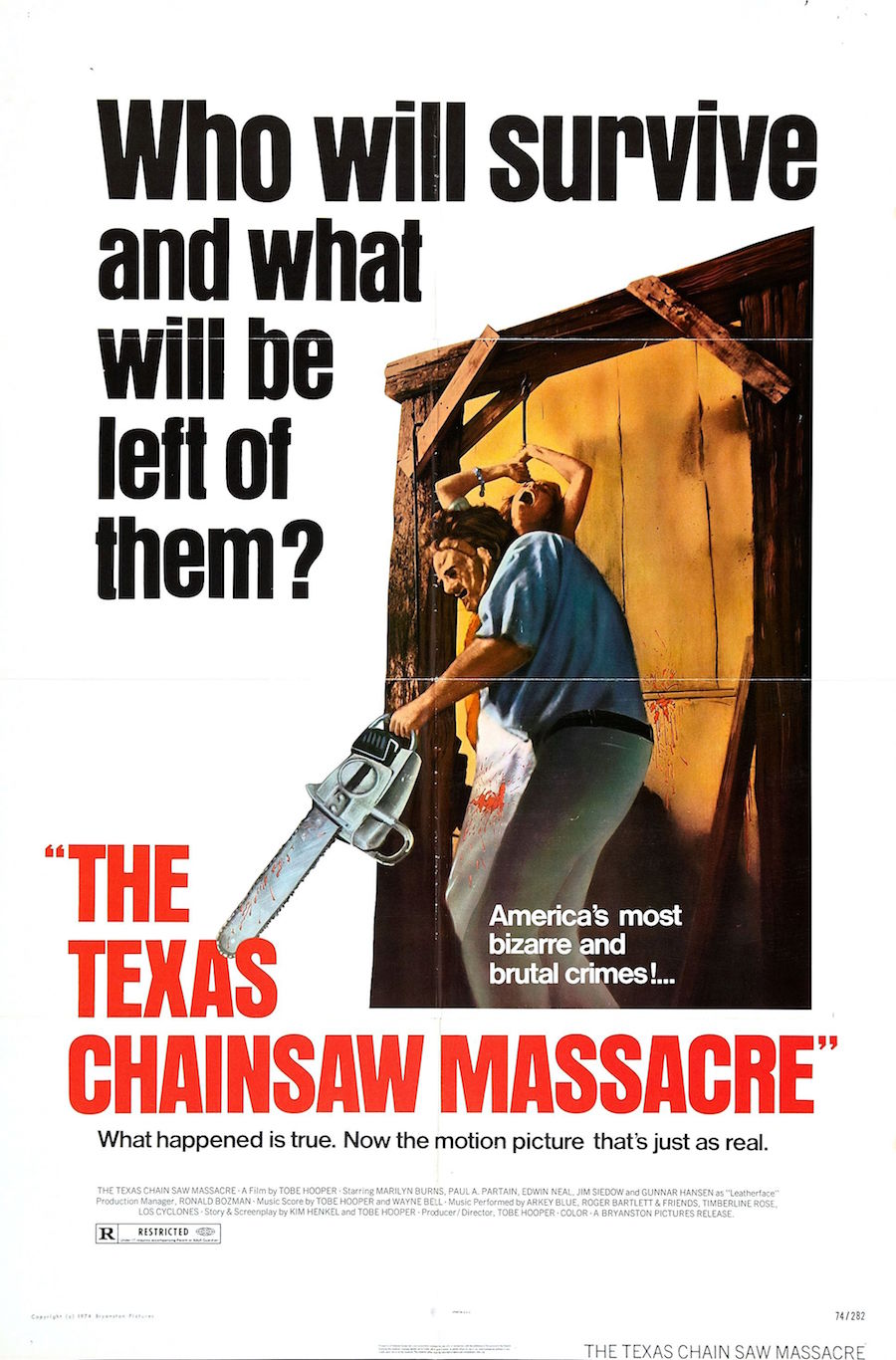 What would happen if a dead child killer came back to haunt the neighborhood in the kids' dreams? That's the intriguing premise of this 80s smash slasher hit starring Robert Englund as the legendary, grotesquely scarred, green and red clad, knife gloved ghoul Freddy Krueger. This wisecracking weirdo commits all kinds of gory acts in his revenge on the kids of the citizens that took his life years earlier. A highly inventive spin on the typical slasher storyline that spawned numerous sequels. TRIVIA: Freddy Krueger was inspired by a man Director Wes Craven saw one night on the sidewalk outside the window as a child. The man stared at a startled Craven, and then walked off. 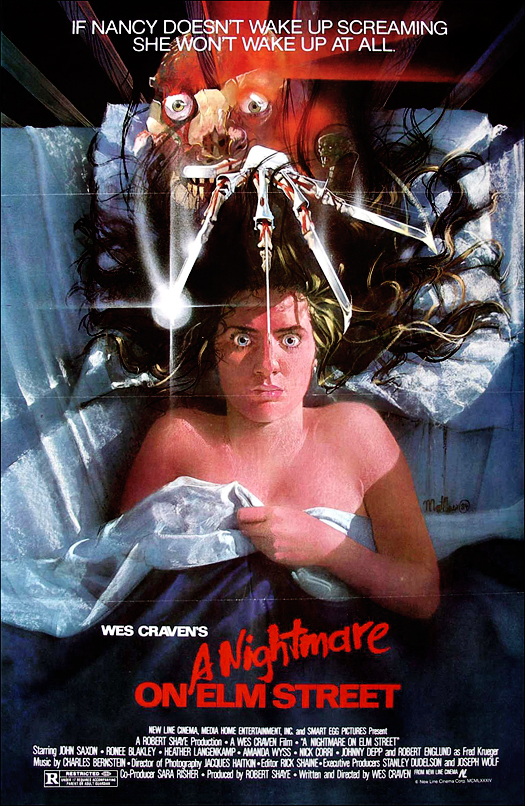 In 1942, a young boy is caught by his mother putting together a jigsaw puzzle of a naked woman and violently reprimanded. In an insane rage, the child attacks his mom with an axe, killing her. The police arrive only to mistakenly think an adult was responsible and the boy is sent to live with his relatives. 40 years later, a small college in Boston has become the target for a serial killer that is hacking up the sexy coeds in very brutal ways. The movie takes much of its inspiration from giallo cinema with its black clad killer and the many red herrings that are set up along the way. Pieces is something special in the pantheon of slashers due to its outlandish, offbeat humor combined with severely nasty gore sequences. It's simply one of the all time greats. 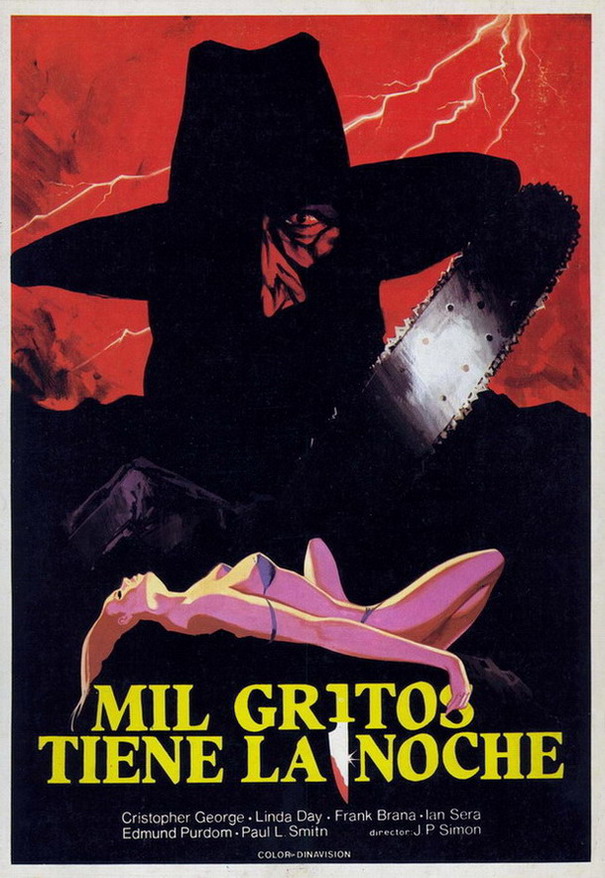 This gory story focuses on a World War II vet that returns from overseas to find his lady love "Rosemary" cheating on him with another man. This drives him into a jealous rage and he proceeds to skewer the two with a pitchfork. 35 years later, the town of Avalon Bay where the murders took place, is getting ready for its first graduation dance in decades. Like clockwork, the Army fatigue garbed killer aka The Prowler returns to commit even more heinous acts on the unsuspecting teens who are out to have a great night of celebrating. Special FX master Tom Savini did some of his best work in this gruesome genre gem thats filled with thrilling kills. 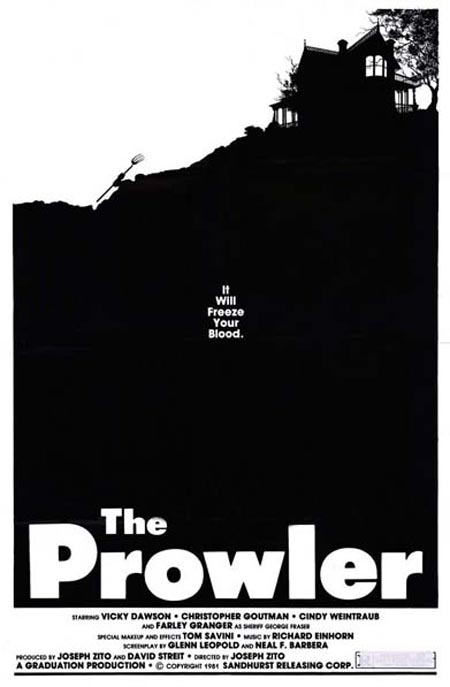