The Horror of Party Beach/Review

Hank (John Scott) and his girlfriend Tina (Marilyn Clarke) arrive at a beach party. Out in the ocean, a garbage scow dumps a barrel of radioactive waste overboard. Once the barrel hits the ocean floor, the cap pops off of the barrel and the waste leaks out of it. The waste reacts with old skeletons (apparently victims of an old shipwreck) at the bottom of the ocean to create sea monsters with ping-pong eyeballs and hot-dog like protrusions in their mouths. Meanwhile, the beach party is in full swing with dancing party-goers and music by a rock band called The Del-Aires. The party gets crashed by some bikers. Tina puts the moves on one of the bikers. When Hank finds out about this, it's on! A brawl breaks out and it's beach guys vs. bikers. After the fight, Tina swims out to what looks like a pile of large rocks to sunbathe. She is attacked by a sea monster and her body washes up on shore. Thus ending the beach party.

The police turn to Dr. Gavin (Allan Laurel) for help. Dr. Gavin is a close associate of Hank, and the two work together in the laboratory. Dr. Gavin's daughter Elaine (Alice Lyon) has the hots for Hank, but she also has mixed feelings about this, seeing as how his girlfriend just got killed by a sea monster and all. Dr. Gavin's housekeeper Eulabelle (Eulabelle Moore) is convinced that the cause of the recent death is "the voodoo." 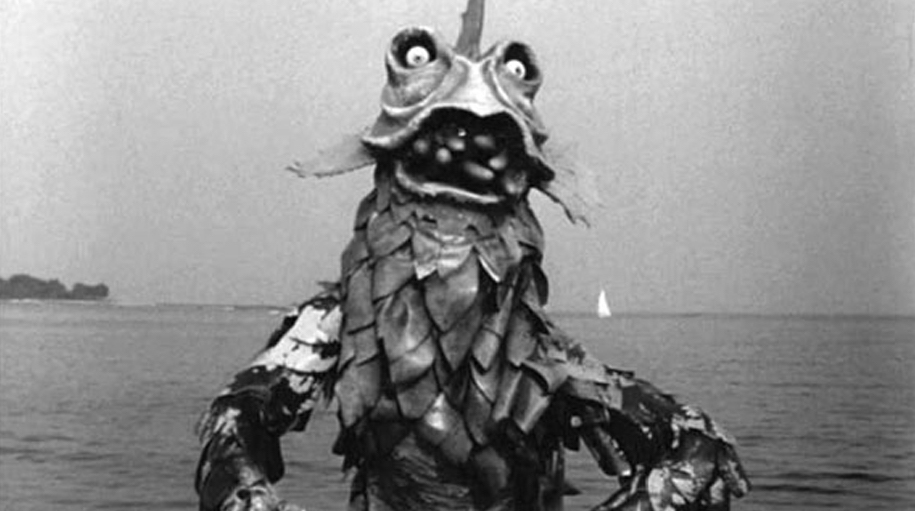 The sea monsters continue their reign of terror. They crash a slumber party and slaughter a bunch of girls there. Next, they kill three girls on their way to New York who were unfortunate enough to get a flat tire by a quarry. Hank and Elaine decide to take a drive out to the beach at night. Ron, the guitar player from The Del-Aires tells them "Yeah, ever since Tina got killed, like, no action around here." Back in town, a sea monster busts through a storefront window, severing it's hand.

Dr. Gavin examines the hand and after some "scientific" mumbo-jumbo explains that the sea monsters cannot be killed. But when Eulabelle accidentally knocks over a container of sodium onto the monster hand and it explodes, they discover that sodium will destroy the monsters. Later, Dr. Gavin and Hank realize that they can find where the monsters are by testing the radioactivity of the water with a geiger counter. So the plan is to find the sea monsters and kill them. Will they be able to save the town?

This film is a personal favorite of mine from the 1960's. It's got rock and roll, beach parties, monsters, some unexpected gore, and plenty of bad jokes. While I enjoy the entire film, my favorite part is probably the first 25 minutes with the beach party going on. Part of me kind of wishes that this whole movie just took place on the beach. When I first saw this, I didn't much care for the music by The Del-Aires. But after subsequent viewings, the music grew on me. I found myself singing along to "Zombie Stomp" and (my personal favorite) "Wiggle Wobble." Del Tenney has said in an interview that this film is a take-off on beach party and monster movies, which makes me wonder how much of the humor is intentional. Either way, this film is a lot of campy fun. It's everything that it should be, and more!