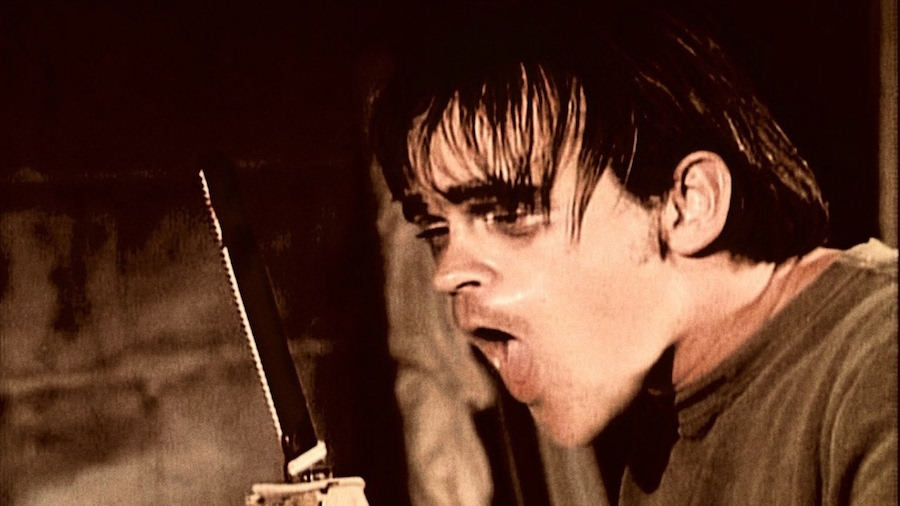 Strange Mrs. Pringle (Elizabeth Davis) and her mentally unbalanced son Rodney (Chris Martell) run a wig shop that caters specifically to wigs made from human hair. Advertising a room for rent, they lure unsuspecting girls, desperate to get away from dorm life at the local college, into their home. When the girls get there, Mrs. Pringle pushes them into a dark room where Rodney scalps them to use for their specialized wigs.

A young college girl named Kathy (Gretchen Wells) fancies herself as an amateur detective (with her boyfriend incorrectly identifying her with James Bond) and is desperate to solve the mystery of the missing girls. When her own roommate disappears, leaving a note directing her to the wig shop, Kathy goes into snoop mode. With her boyfriend away at a demolition derby, Kathy goes to the Pringlesí to confront them on her own and bring them to justice before any more girls can be skinned for wigs.

With The Gruesome Twosome, Herschell Gordon Lewis makes the leap back into gore films after making a couple of films that downplayed the gore effects (and some children's films!) made famous by his first entries into the genre. Although there are some decent scenes of gore, the script wasn't as strong or near as campy as some of his previous films were. Also, the constant use of filler to pad out the running time makes the story wander endlessly.

The filler is perhaps the most bizarre thing about this film. The first instance comes right at the beginning, featuring a set-up of the plot as told by a styrofoam wig head. The scene essentially is about a smarmy wig head chastising the "new" head on the block. The new head then starts to tell the story about how she came to be, and the whole thing ends with the smarmy wig head getting stabbed right in the "soft spot" (and actually bleeding!). Later in the film is a scene in which our heroine and her boyfriend go to a drive-in theater to see what I would imagine would be the punk version of My Dinner with Andre. The scenes we see of the movie are nothing but a man and woman (viewed only from the neck down) sitting at a table eating. While the woman tries to tell stuff to the man, he only grunts things like "It's a banana" or "More Beer!" and we get loving close-ups of him enjoying potato chips. It's a surreal experience to be sure.

The performances are all pretty decent (and not a single cast member seems to be reading his or her lines off of the palms of their hands), thanks mainly to the perfectly chosen cast. Elizabeth Davis is perfect as the matriarchal Pringle, who dotes on her son and her stuffed bobcat Napoleon with equal aplomb. Chris Martell, as the maladjusted Pringle son, is appropriately dopey AND psychotic and makes for an interesting viewing experience. Gretchen Wells plays her Nancy Drew-like character well, though some early scenes with her tend to be slightly annoying (especially when she is chasing down the school janitor, whom she suspects is the killer). Fans of She-Devils on Wheels will also recognize Rodney Bedell in a role as Kathy's literary-challenged boyfriend.

The Gruesome Twosome has been released on DVD through Something Weird Video and Image Entertainment. The film is presented in the full frame format and the transfer is the best this film will more than likely ever see. Some of the brights are a little too oversaturated and there are instances where the audio sounds absolutely horrible, but the fact that his film has been preserved at all is a major feat. Included on the disc is a gallery of Gordon's exploitation film art, the original trailer (featuring Blood Feast's Bill Kerwin), and a short subject called "Wigs-O-Rama" that shows a poor dog being dragged across (and dangled off of) a model show runway and depressed Italian women having their hair chopped off to be made into wigs and be passed out at offices (!?!) for working women in the US.

Also on the disc is a commentary track featuring Something Weird owner Mike Vraney, Director Herschell Gordon Lewis, and (hidden in the bowels of the recording studio) Jimmy Maslin from Shock Films. Gordon discusses the reasoning as to why he had to use so much filler (the guy who was responsible for timing the film apparently had a broken stopwatch as the time) and he also shows much love for his cast. Several times during the track, Vraney and Gordon discuss that actress Davis has pestered Gordon many times about doing a sequel to the film, bringing back the Pringles for today's modern horror movie audience. Though few have seen this film (until this great DVD presentation), I think a sequel would be an interesting idea... but not until after Blood Feast 2050 comes out!