Whether you consider Tobe Hooper a genius or just a jerk who got lucky from directing The Texas Chainsaw Massacre, I still consider him one of my favorite directors of all time. He knows how to build tension and scare audiences by using lighting and visual effects. Just look at The Texas Chain Saw Massacre, it has a very low amount of gore, but it gives me goosebumps every time I watch it because of the dark and hopeless atmosphere. After the failure of his follow up to that classic, Eaten Alive, he came back with another horror movie called The Funhouse. It's the first time Mr. Hooper worked with a big studio and to be honest, it gave me mixed feelings after I watched it. 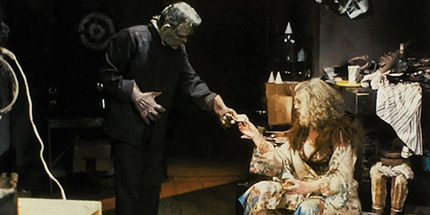 The film begins similar to John Carpenter's Halloween. We see someone from a point-of-view perspective that grabs a knife and then stabs a girl in the shower, but uh-oh it's a fake knife. The guy in question is Joey (but I'll call him Tommy Jarvis. Why? I'll explain later.) and the girl is, of course, Joey's sister Amy. She decides to lie to her parents and go out with her friends Buzz, Liz, and Richie. They visit a local carnival and have fun together. Unfortunately, they get stuck in a ride called The Funhouse, where a dark and scary secret hides....

I love the slow build-up of suspensee that happens and not only does it give the audience a fun setting but also something more interesting. Pay attention to the various places they go, some of these will surprise you in later parts of the film. The characterization is super-cliche by today's standards. We have the nice girl, the "hero" guy, the foul-mouthed girl and the annoying nerd (Gee, who's the first one who'll get killed?) And what about Joey? I refer to him as Tommy Jarvis (from Friday The 13th Pt 4: The Final Chapter) because, well, they are basically the same character! They are obsessed with horror movies and special effects. In fact, I thought that he was going to be the one who saves the day. Although after running around the carnival a few hours, he gets picked up by his parents (who find out that he secretly left home without telling them) and....that's it, he's gone. This makes our Tommy a useless character. Why build him up as a horror movie fan when you are NOT even going to use him in the film? They should have just erased him in that case. Okay, there's a scene in which Amy scares him (after Tommy scared her in the opening scene) by saying that she's not going to take him to the carnival and she's gonna get him back so bad. What's the purpose of this dialogue? Well, that makes him decide NOT to tell his parents what's going on inside the Funhouse. It doesn't make much sense at all.

Anyway, I really liked the creepy atmosphere in this film a lot. Just like most of Tobe's work, it has captivating cinematography and visual effects which create a uniquely disturbing mood. When the secret about The Funhouse is finally revealed, it's not only a nice surprise, but also a causes a greater amount of tension. By the way, am I the only one who think that The Funhouse looks like a John Carpenter movie? Don't get me wrong, I don't mean it in an negative way. Both guys are my all-time favorite directors, but the tone, the setting, and a few other things that I can't quite explain make me think that if this film had an electronic music score and slapped the words "Directed by John Carpenter" on the credits, nobody would know the difference. Nonetheless, this film is a really good ride (no pun intended). It's entertaining and way better than Eaten Alive. Although the plot is pretty cliche its still enjoyable. Check it out.