The final girl is a horror film character that specifically refers to the last person (usually a woman or girl) alive to confront the killer, usually the one left to tell the story. The concept has been used in dozens of films, including The Texas Chainsaw Massacre, Halloween, [1] Friday The 13th and A Nightmare on Elm Street. The term was coined [2] by Carol J. Clover in her book Men, Women & Chainsaws: Gender in the Modern Horror Film. [3] Clover suggests that in these films, the viewer begins by sharing the perspective of the killer, but experiences a shift in identification to the final girl partway through the film.

The final girl is usually sexually unavailable or virginal, avoiding the trappings of the victims like sex, drug use, etc. She sometimes has a unisex name (e.g. Teddy, Billie, Georgie, Sidney). Occasionally the Final Girl will have a shared history with the killer. The final girl is the "investigating consciousness" of the film, moving the narrative forward and as such, she exhibits intelligence, curiosity, and vigilance. 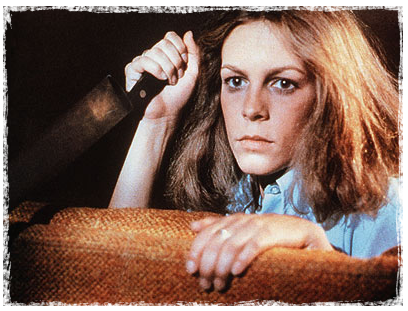 One of the basic premises of Clover’s theory is that audience identification is unstable and fluid across gender lines, particularly in the case of the slasher film. During the final girl’s confrontation with the killer, Clover argues, she becomes masculinized through "phallic appropriation" by taking up a weapon, such as a knife or chainsaw, against the killer. Conversely, Clover points out that the villain of slasher films is often a male whose masculinity, and sexuality more generally, are in crisis. Examples would include Norman Bates in Alfred Hitchcock's Psycho, or Billy & Stu from Wes Craven's Scream. Clover points to this gender fluidity as demonstrating the impact of feminism in popular culture.

The phenomenon of the male audience having to identify with a young female character in an ostensibly male-oriented genre, usually associated with sadistic voyeurism, raises interesting questions about the nature of slasher films and their relationship with feminism. Clover argues that for a film to be successful, although the Final Girl is masculinized, it is necessary for this surviving character to be female, because she must experience abject terror, and many viewers would reject a film that showed abject terror on the part of a male.

The film Behind the Mask: The Rise of Leslie Vernon (2006) explains and talks about extensively this popular horror film trope (although in the film, it is referred to as "survivor girl"), even using it as a major plot device.