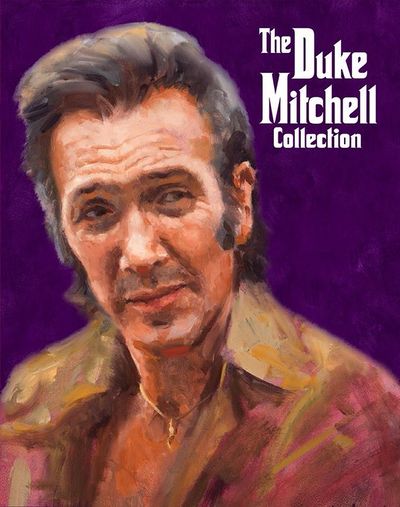 Massacre Mafia Style: Italian-American actor and nightclub singer Duke Mitchell wrote, produced, directed and starred in this homemade answer to The Godfather, self-financed with earnings from his career as the self-proclaimed "Mr. Palm Springs." Previously known for his Martin and Lewis act with Sammy Petrillo as seen in Bela Lugosi Meets a Brooklyn Gorilla, Duke plays the ruthless son of a Mafia kingpin who blasts his way through Hollywood on a bloody crime spree. Promising "more guts, more action, more dynamite" than the Mario Puzo gangster classic, Massacre Mafia Style delivers an onslaught of low-budget mayhem unlike anything you've ever seen.

Gone With The Pope: Lost for over 30 years, Gone with the Pope stars famed nightclub performer Duke Mitchell as Paul, a paroled gangster with an unholy scheme: to kidnap the Pope and charge "a dollar from every Catholic in the world as the ransom. Shot in 1975, Gone with the Pope was unfinished at the time of Duke Mitchell's death in 1981. Sage Stallone and Bob Murawski of Grindhouse Releasing rediscovered the film in 1995 and vowed to save it from obscurity. Academy Award-winning film editor Murawski (The Hurt Locker, Spider-Man, Army of Darkness) spent 15 years completing Gone with the Pope from the surviving film elements.