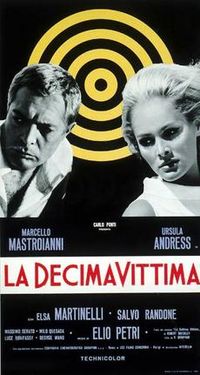 Elio Petri 's The 10th Victim is a sci-fi romantic thriller which stars Ursula Andress and Marcello Mastroianni. The movie set in the 60s version of near future, revolves around "The Big Hunt" in which the participants called "Hunters" kill their designated victims. Each participant gets an alternate chance at being a hunter and victim. The victims are supposed to figure out the identity of their to-be assassins and finish them off before they are killed. In the movie's timeline, this is supposedly a successful way of doing away with wars.

A hunter named Caroline Meredith (Ursula Andress) is assigned Marcello Polletti (Marcello Mastroianni) as her 10th victim. If successful, she could earn enormous amounts of fame and wealth. However, when she finally gets to know him, she finds that Marcello is a hopeless cynic with little interest in life.

Adding to this plotline are Marcello's mistress Olga (Elsa Martinelli), his ex-wife, an international film crew who strike a deal with Caroline to shoot her last hunt in order to promote a product and Marcello's own counter-plan against Caroline's arrangement.

While the film is centered around this main hunt, it is brought to life by the random hunts which populate its world. It begins with one featuring Caroline and her hunter. She uses her seductive charms to foil her pursuer's attempt and get the better of him.

When Marcello is returning from an unsuccessful attempt to cash in his sixth hunt, he encounters a woman trying to evade her hunter. She tries to avoid her fate by sticking along with Marcello, but he refuses to help her. Eventually, she is killed by her hunter. The hunt is deemed legal but the hunter is penalized for parking the car on the wrong side of the street! This helps add a tinge of dystopian humor to the setting. 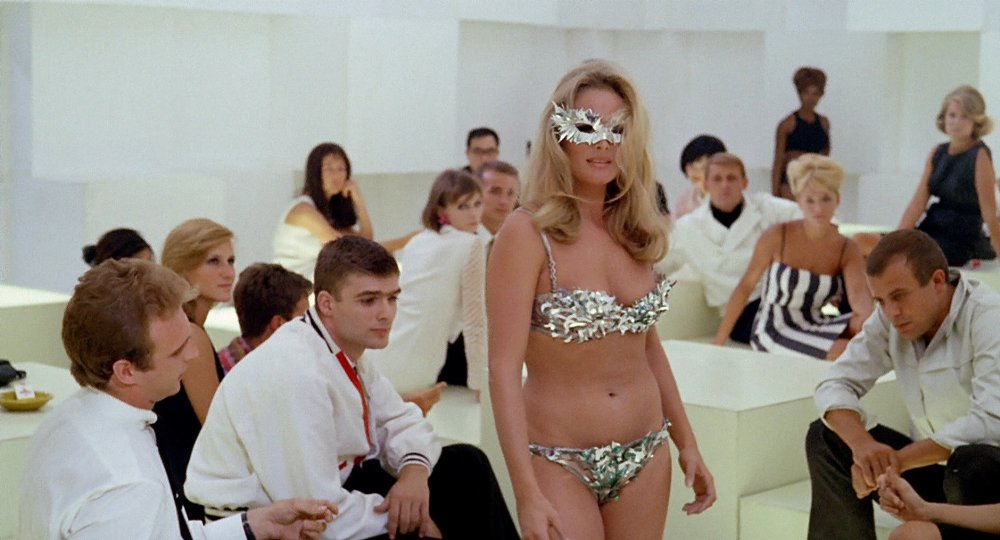 The movie picks up when we realize that Marcello has his own arrangement to tackle Caroline. Funnily enough, this involves placing her on a rigged chair which will spring her off in a pool where a crocodile awaits to devour her. We never get to witness this mechanism at work during the hunt but its trial is hilarious enough.

Both the events (The hunt and its counter) evoke enough interest to involve major commercial sponsors. This helps add the notion that unbridled capitalism informs these bloody games. 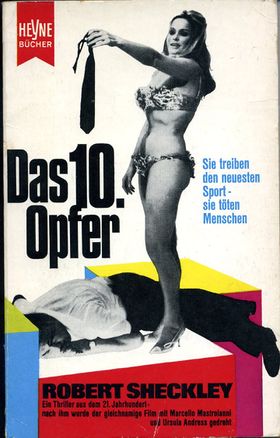 Ursula Andress does well in the role of Caroline, who falls hopelessly in love with the musing Marcello. She eventually figures out a way where all the parties are satisfied. (Not sure about Marcello, but at least, he does get out of it alive) Marcello Mastroianni plays a man who is confused and miserable, but we're never sure as to what exactly troubles him.

The 10th Victim would've done better to concentrate itself on the action-filled hunts rather than the subplot revolving Marcello's hopeless love life involving his ex-wife and mistress. This culminates into a ridiculous sequence where his ex-wife and mistress turn up at a graveyard and start shooting at Marcello and Caroline (Towards the end of this scene, Olga finds a handsome spectator in the middle of the graveyard and leaves Marcello's ex-wife all alone).

One of the better aspects about the film is the way it envisions its future world. The 60s version of future is filled with gadgets including robots, funky architecture and futuristic weapons. Yet, we see that some things never change. So, we have the futuristic cults like the sunset worshippers and the moon worshippers.

The cults make as little sense as one would expect from them and the commercial exploitation angle is well explored. Marcello discloses to Caroline that his entire participation in the cult-business was for money.

The movie would be enjoyed by fans of Ursula Andress and Marcello Mastroianni. Elio Petri would go on to direct important films like The Working Class Goes to Heaven, We Still Kill the Old Ways and the Academy award-winning Investigation of a Citizen Above Suspicion.

The film is available on BluRay on Amazon.com