The film begins with a man in a red shirt named Tung How (Chen Sing) whos looking for a guy named Fat Dog who used to work with him, but stole some money and split. He confronts the other gang Fat Dog is with now and he fights the main dude who wears an eyepatch. If Tung How wins, he gets Fat Dog to bring back to his boss Mr Liu (Tan Tao Liang). Well, he wins the fight and Fat Dog is brought back to Mr Liu. Mr Liu takes Fat Dog and beats him up, but Tung How pleads with Mr Liu not to kill him. Mr Liu tells Tung How that he can choose to get rid of Fat Dog in any way he chooses. Tung How chooses to brand Fat Dog's tattoo (the sign of the gang) and kick him out forever.

After the opening credits, we are introduced to a man named George (Norman Wingrove) being picked up at an airport. He has a special diamond that hes carrying called the North Pole Star. When George is in the car, a group of criminals set up a roadblock and stop the car and beat up the other passengers and steal the diamond. They grab the diamond and take off. Its Mr Liu's gang, made up of many thugs including a familar face to kung fu lovers, Bolo Yeung. When the diamond goes missing, the government officials calls in the only man who can get the diamond back, an ex CIA operative named Lucas (Jim Kelly). Lucas visits George in the hospital and gets some info first.

Lucas starts investigating around Hong Kong for anyone connected with the heist. He knocks on the door of one of the suspects, Ah-Men (whos part of Lius crew) and the first thing the man does is he tries to punch him, but Lucas lets him know hes no pantywaist and beats him into submission. He explains that if he gives the info he will have more money than he can imagine. But Ah Men relents and doesnt give the info. Lucas goes to clubs and tries to find out whos behind the heist, he meets a young lady who happens to be dating Tung How from Liu's gang. In one of the better action scenes of the film Lucas gets in a fight with Liu's men in a logging yard. They race around in some tiny cars and crash into each other. 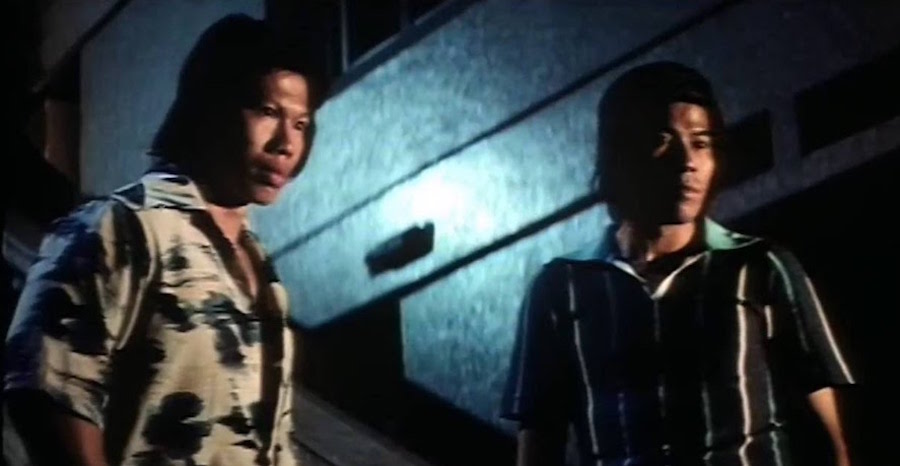 Mr Liu has hired an old man to cut the North Pole Star diamond so he can sell it. He gives the old man whatever he wants. The old man choose to have some prostitutes. Tung How confronts Lucas with his gang, but before they can fight, the cops come and they have to take a raincheck. Meanwhile, Liu sends his men to kill Fat Dog. One of the best shots in the movie is when Bolo Yeung does his famous "killing face" (the one he does in Enter The Dragon when he pulls that guys neck back) when hes drowning Fat Dog. It adds a nice laugh to the proceedings.

One of the most gratuitous scenes in the film is when Mr. Liu beats his mistress (Tung Hows girlfriend) and rapes her. Its pretty cruel stuff. It shows how much of a scumbag Mr Liu really is. She goes to Tung How, and tells him, but Tung How holds Mr Liu in high regards since it was Liu who helped him when he was orphaned as a child. She explains that Liu is not what he seems.

The climactic showdown on a freighter with Tung How, Lucas and Mr Liu is the coolest part of the movie. The fight choreography is excellent and its a total asskicking goodtime. The Tattoo Connection isnt a classic, but its one of those fun bad movies, where you can laugh along with the scenes of people saying things like "You damn bastard!", getting beat up and you can oogle at the nude Asian babes. It actually has more melodrama than other kung fu films of the time, so I guess that makes it different. I personally watch Kung Fu films for the fighting, not for the discussions.