Stone is, quite simply, a hard film to review without taking into account nostalgia and its historical importance. My father, who showed me the film, used to ride motorcycles and consequently saw Stone when it was released. Being that it is the only real Australian biker film that anyone knows of, it has special significance. In the same way that The FJ Holden captures a specific culture in the Sydney suburbs, Stone captured the heyday of biker culture. And most importantly, it is a film that was concerned especially with that. Director Sandy Harbutt wanted to capture what it was like in a biker gang at that specific time and he wanted to capture it realistically. It definitely shows. The whole film resonates with a level of detail that few biker films can match. The ending is of particular note and manages to bring to the audience’s attention a code of honour of sorts among the bike gangs. 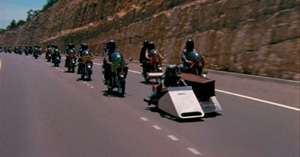 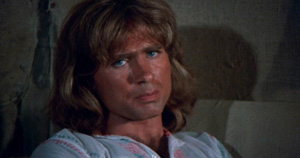 The story concerns a motorcycle gang who are one by one being assassinated. Stone, an undercover cop, is sent to infiltrate the gang in an effort to uncover who is behind the executions. What made the film especially memorable were the motorbikes. Where the US biker films of the sixties focused on choppers, the gang in Stone ride Kawasaki 900s. They were chosen for being the fastest bikes you could find at the time. Each of the members had one and they were all painted according to their individual character. It is quite a sight to see the whole gang riding down the open highway or through the suburbs of Sydney.

The film featured some amazing high speed chases and races through Sydney. A dangerous cliff stunt that knocked out the stuntman is particularly exciting. But the races and stunts are only half of it. The characters are all great and have names like “Undertaker”. There are some classic seventies drug film effects (during a scene that reportedly took hours and involved real marijuana) and hilariously cool dialogue. Sandy Harbutt, who wrote and directed the film, also has a starring role as the gang’s leader and does a superb job – on all fronts. One of the shining examples of Australian exploitation, Stone is well worth a watch. I recommend you, to use the film’s tagline, “take the trip!”