Douglas Hickox’s British cult crime thriller Sitting Target (1972) along with Get Carter (1971) and Villain (1971) was a film that garnered a strong reputation for its seedy, hardboiled depictions of London underworld criminals.

Oliver Reed plays Harry Lomart a convicted murderer who is planning to bust out of prison with the help of his fellow jailmate and longtime friend Birdy (Ian McShane). Before Harry leaves, his estranged wife Pat (Jill St. John) visits him and in a tense face to face meeting she breaks the news she is pregnant with another man’s child. This confession causes Harry to explode in furious anger and he in turn breaks the glass partition between them and tries to strangle her but is quickly subdued by the guards. After a stretch in solitary confinement, he is sent back to the regular population where he and Birdy go forward with their plan to bust out thanks to some help from a third prisoner and a guard who they pay to look the other way. Their method of escape is to scale the outer prison wall, hook a rope across and descend down, hop the fence and leave in a van waiting for them. This is a highly suspenseful and thrilling sequence as what seems should go rather smoothly at the last minute is thwarted by a sudden accident.

Harry’s first order of business once he’s free is to get a special weapon to aid him in his quest for revenge on his two-timing wife. He goes to a shady gun dealer (Robert Beatty) who presents him with a custom made 9mm Mauser pistol, the only problem is Harry has no money and must abruptly steal it. He then heads to confront his wife but is surprised by a police detective named Inspector Milton (Edward Woodward) who has been assigned to protect her. After a quick and brutal fistfight on the balcony, Harry takes off as a backup police squad arrive and begin searching for him in the area. It’s here we get one of the film’s most unusual and visually stylized action sequences as Harry evades several motorcycle cops inside a courtyard that is filled with hanging laundry and bedsheets. The encounter is a capped off with a highly explosive outcome thanks to Harry’s deadly gun. Luckily, Birdy is waiting nearby in a van so Harry’s escape is easy. 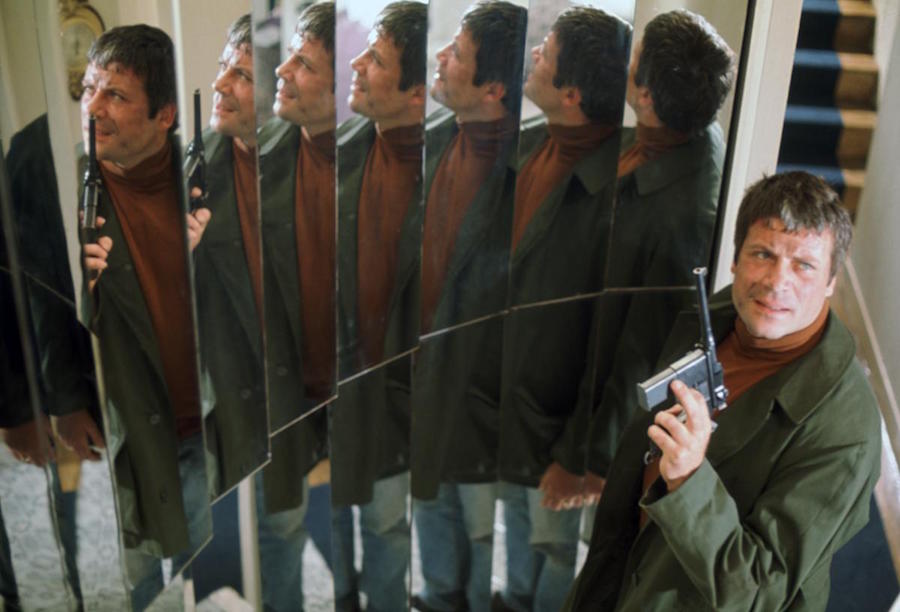 The two blokes’ next stop is at an old acquaintance’s home to pick up some cash. When they arrive at the flat they find the man’s girlfriend Maureen (Jill Townshend) there alone and Birdy, the ladies man gets some loving on, while Harry, who clearly is preoccupied with his wife doesn’t want to get sexually involved. When MacNeil (Freddie Jones) arrives home unaware of their presence, they interrogate and then kill him. Harry goes back to get his wife once again this time using his gun’s special long range scope to aid him, but an unforseen bushwhack ruins his attempt and breaks his plan of murderous wrath apart.

What sets Sitting Target apart from other crime films of its time is Douglas Hickox’s tight direction and the visceral cinematography by Edward Scaife who had previously worked on such action-adventure films as The Dirty Dozen (1967), Dark of the Sun (1968) and Hannie Caulder (1970). It is visually bold with a liberal use of deep focus and close up framing. The way the film is shot evokes the feeling of constant tension with its confined, cramped spaces in every scene as if to convey that while Harry is outside prison, in his mind he is still locked up in a small cell. The London backdrop isn’t filmed with a glamourous style but rather a down in the street, hazy, working class aesthetic that enhances the rough and tumble world these men come from. Although the films promotional art depicts Oliver Reed’s Harry as a cruel, mindless animal, he actually is a complicated character that really doesn’t come across as a one dimensional maniac. He has been betrayed and wants to get his revenge but at the same time still has a deep unrequited love for his wife who he’s lost.