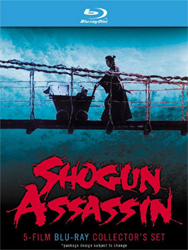 SHOGUN ASSASSIN After his wife is murdered and his house destroyed, Ogami Itto and his infant son journey the dusty roads of Japan in search of revenge. However, as a sword for hire, his first order of business is a showdown with three agents, known as 'The Masters of Death."

SHOGUN ASSASSIN 2: LIGHTNING SWORDS OF DEATH After refusing a Governor's offer, a series of assassins, including a gunslinger, a master swordsman, and an army of soldiers await Ogami and Daigoro. And to make matters worse, a skilled samurai keeps politely asking if they can have a duel.

SHOGUN ASSASSIN 3: SLASHING BLADES OF CARNAGE Ogami is hired to kill a beautiful tattooed assassin, only to find himself in a situation where honor and justice are in conflict. Meanwhile, his nemesis, Retsudo, along with a legion of his best warriors, lurks closely behind.

SHOGUN ASSASSIN 4: FIVE FISTFULS OF GOLD Five warriors enlist Ogami to save their clan. However, to ensure he is up to the challenge, he must confront and fight each man separately -- only then will he receive his pay and further details of his assignment.

SHOGUN ASSASSIN 5: COLD ROAD TO HELL Retsudo launches one last plot by dispatching his two remaining children after the head of Ogami. A final showdown with Retsudo awaits Ogami and Daigoro in the snowy peaks of Japan.