Rebus is a 1968 crime comedy with elements of an international espionage film. This Spanish-Italian-Argentine-German co-production was directed by Nino Zanchin. 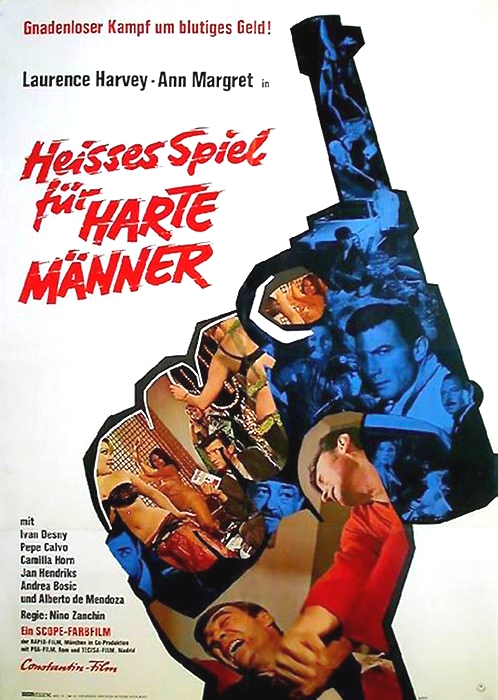 The American International Pictures - A Comprehensive Filmography has this to say (excerpt): Rebus is a witty if undistinguished comedy, not easily classified into genre, perhaps best described as a cross between an espionage farce and a bank heist thriller. The plot is leisurely and unfocused, especially considering there were five screenwriters (!), but the international co-production is affable nonetheless, due to the strength of the performances and the exotic ambiance. Laurence Harvey is extremely likable, as a washed-up, alcoholic croupier who stumbles into heroism against his better judgement. Ann-Margret shines as a sultry (and morally compromised) night club singer, and sings two torch songs (presumably in her own voice), one being the film's theme song, "Take a Chance." Among several strong supporting characters, the one which really stands out is a nosy American tourist, played by Camilla Horn, a popular leading lady in the early days of sound motion pictures..... this clueless busybody turns out to be the mastermind of the whole operation. The film starts off with a terrific opening sequence, as a drunken Harvey is escorted through the streets of London by a accommodating motorcycle gang....Rebus seems to have been released theatrically everywhere but int he Uk and the US: AITV released the film directly to television in their "Films for the 1970s, volume 1" syndication package, an eclectic mix of top-drawer features..... although the package was announced in early 1971, Rebus was available for syndication only after 9-1-1973.