The dialogue borders on the absurd; the optical effects aren't up to par even for a 60's science fiction film; the actors frequently give zombies a good name. Yet, despite its major drawbacks, Planet of the Vampires stands as an influential film. When making Alien, Ridley Scott took his cue from this imaginative but low budget film. The alien planet, spacecraft and many of the more atmospheric sequences clearly were an influence on Scott's highly praised horror film (it's stretching it to call Alien a science fiction film). It's also clear that POTV had impact on director Tobe Hooper's Lifeforce. 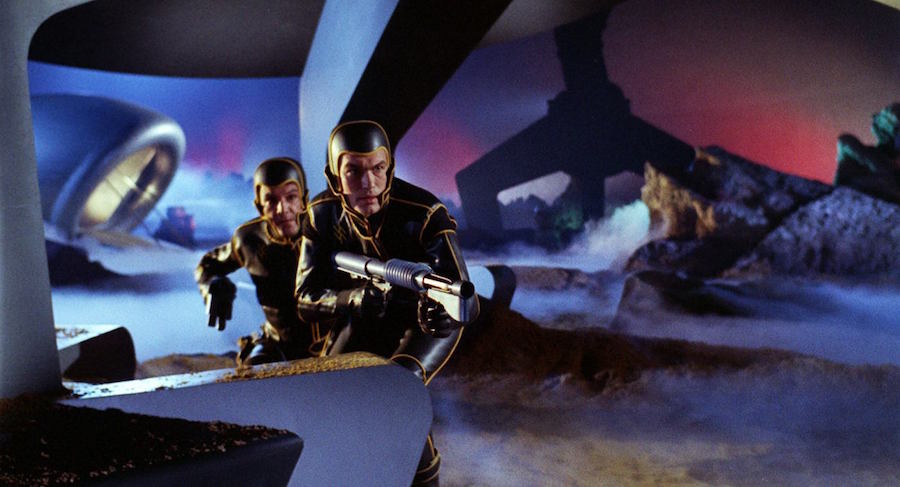 So will you enjoy this movie? That depends on how forgiving you are. Mario Bava's direction and the cinematography are quite imaginative and the atmospheric production design make this a triumph of style over substance. Because this was shot in Rome (with a mixture of American and Italian actors), the acting and dubbing adds an odd quality to the film. Barry Sullivan's frequently detached performance isn't one of his best but given that his director and almost all the crew didn't speak English, It's understandable.

Bava's direction and the inspired production design make this a very influential minor film classic. It's clear seeing the film again after some years, that Bava was trying to create an atmospheric Forbidden Planet and he suceeds for the most part. Overall I really enjoyed this, creepy, highly atmospheric science fiction thriller, and it was really interesting to see various concepts in this early film adapted in other, more popular films released later on, specifically Ridley Scott's 1979 feature Alien.