The film opens up with an old fisherman who finds a bunch of tarot cards abandoned inside a cow’s skull. The tarot cards depict each member of the Neon Maniacs; each with his own particular identity – the Hangman, the Archer, the Samurai, the Biker and so on and so forth. It doesn’t take much before the poor old geezer gets decapitated by one of the maniacs with an axe. After this somewhat creepy opening, we move on to a park where a bunch of horny teenagers are hanging out; amongst them our heroine Natalie. Natalie is (surprisingly enough) the only virgin amongst all her idiot friends, and that automatically qualifies her to being the only survivor after the terrible massacre the Maniacs unleash shortly thereafter.

Natalie tells her story to the police, who don’t really seem to believe her (who’d blame them?) After going back home, she decides to take a midnight dip in her swimming pool (this is hours after she saw all her friends slaughtered in front of her eyes- now that is what I call one cold bitch). One of the maniacs (who magically manages to find where Natalie lives) tries to attack her once again, but quickly abandons his plan as soon as Natalie jumps in the pool (this is what is commonly referred to as foreshadowing in cinematic terms, folks). 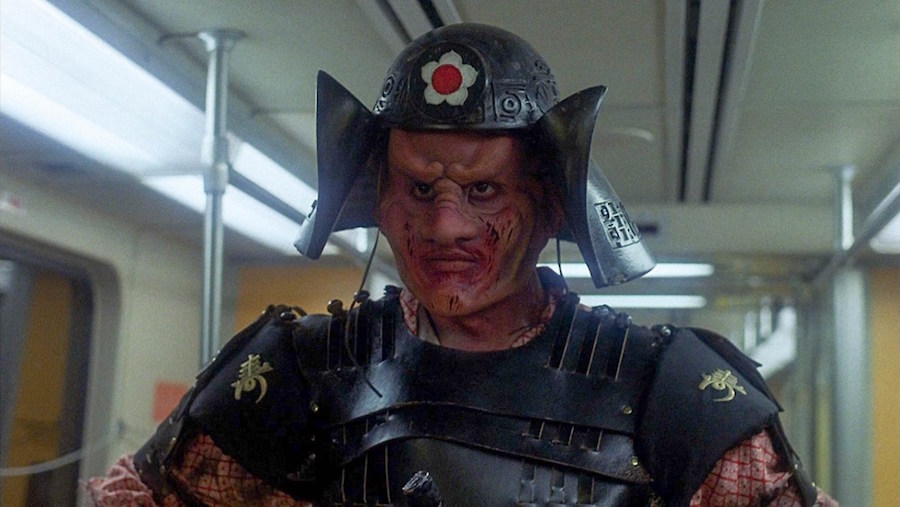 Eventually, Natalie teams up with a guy called Steven (who also happens to have a secret crush on her) and a horror movie geek named Paula in order to combat the Maniacs, who keep running after her night after night to finish her off. I don’t have a clue how the Maniacs always managed to know where Natalie was hanging out during a particular night, but they always succeeded in tracking her down (be it the subway station or the school). I always wondered if there was a feasible explanation for this fact, then it dawned on me that the screenwriter simply couldn’t be bothered to explain the six hundred and forty three plot holes present in the movie.

During a climatic encounter with one of the Maniacs in her home, Paula finds out that the Maniacs can be killed by water (that was the whole secret twist of the movie all along, sorry to disappoint you). Apparently you won’t do them any damage if you fire a gun or try to blow them up with dynamite…but you might have a chance of winning if you just piss on them. The last night of the film, taking place during a school dance and featuring two cheese-inducing eighties rock bands in the most awful Battle of the Bands in history, will decide the heroes’ fate and that of the Neon Maniacs.

Let me get the record straight here. Objectively speaking, this is bar none one of the worst movies ever made. The story is ludicrous, the acting is laughable and the plot has more holes than Tony Montana after getting wacked. Despite all this, the film is tons of fun. I have watched it a number of times and it never fails to entertain. Save for one Maniac (the awful looking dragon with one eye), the costumes and make-up effects are top-notch. Some of the killings are also pretty cool. (Look out for Doc, played brilliantly by Andrew Divoff, when he decides to make an operation on an unfortunate security guard). The true stars of the movie are, unsurprisingly, the Maniacs themselves. All of them are given their short moment of stardom. Juice gets to destroy a turnstile for no reason and drives a train like a little kid playing with a new toy. Samurai gets to decapitate a chick’s head while she is giving head (oh, the irony). Biker gets in a fight with a punk, accompanied by the cheesiest use of synthesizer music I have ever heard. Hangman just hangs people left and right and even manages to dance with a drunken girl at a party (I guess the Maniacs have needs too). And all of the other Maniacs get to shine in their own weird, unique way.

Neon Maniacs may not be a movie for everybody, but those who are fans of really bad horror movies may be in for quite a treat! Give it a try; you may become its newest fan.