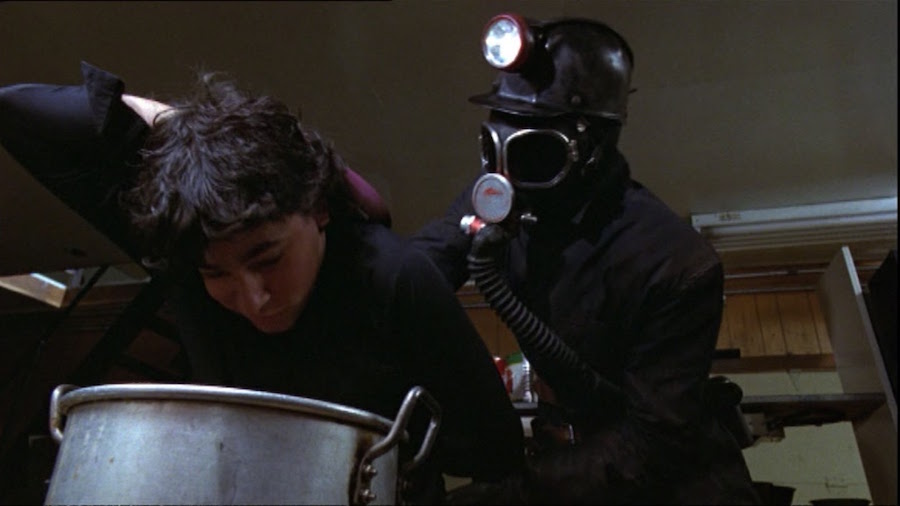 PICTURE: The first thing you'll notice when you watch this long awaited special uncut edition of My Bloody Valentine is how beautiful the film transfer looks. The picture is gorgeous. Presented in (1:78:1) 16 X 9 Anamorphic Widescreen. Colors are bright and the saturation and dark levels look incredibly good.

AUDIO: Dolby Digital 5.1 Surround Sound | Original Mono. The sound is sharp and clear. A superb audio accompaniment to match the visuals. One sequence that really stands out in surround sound is when the group of partygoers travel down into the mine. Its like a rollercoaster ride. The throbbing and rumbling bass sounds inside the mine also crank up the excitement.

Bloodlust: My Bloody Valentine and The Rise of the Slasher Film: What we know now as the "slasher film" was initially born when Alfred Hitchcock's Psycho (1960) was released. The film introduced a new style of onscreen death to movie audiences and inspired future films by laying down a different way to design horror film plots/characters. The "psycho killer" cycle continued in the 60s and 70s with Italian giallo cinema (murder-mysteries) then moved across the Atlantic to Canada with Bob Clark's groundbreaking proto-slasher Black Christmas (1974). In 1978, taking inspiration from both the Italian gialli and Clark's Black Christmas, John Carpenter's Halloween brought the slasher film back home to the United States and gave us the masked slasher icon Michael Myers. In 1980, Director Sean S. Cunningham made Friday The 13th which streamlined the slasher/stalker formula even more. In 1981, George Mihalka's My Bloody Valentine was unleashed. The unique thing about this film was its authentic setting and character portrayals in a small mining town in Nova Scotia. This was also essentially the first "working class" slasher film, as it revolved mainly around real blue collar mine workers. The film picked up all the subtle nuances and specific details of how the smalltown miner's lived and worked and it added alot of depth to the standard genre movie. It also broke away from The Final Girl theorem and had a girl and a guy fighting the killer during the climax. These aspects set the Canadian film apart from the other slasher genre films of the day. This well made, informative featurette includes interviews with the cast and crew including Director George Mihalka, Co-stars Neil Affleck and Lori Hallier and Producers Andre Link and John Dunning.

Bloodlines: An Interactive Horror Film History: One of the coolest features on the Special Edition is this interactive family tree that shows the many relatives of the main slasher film subgenre. Each one is broken down into certain films and given a historical overview. (Note: these are not in specific order):

Deleted Footage with Director, Cast and Special Effects Designer Introductions: Unlike the previous video releases of this film, My Bloody Valentine now truly lives up to its colorful title. The brutality, gore and red stuff is here for all the fans that have been waiting for decades to see it. Each scene is introduced by various cast and crew members of the film which gives more insight to the ideas behind them. You can also watch the scenes as part of the uncut film played in its entirety.

THE FINAL WORD: This Special Edition DVD of the 1981 Canadian slasher classic is a must own for fans. The extra features (esp the deleted sequences) are excellent and will keep viewers very happy with a thorough celebration/appreciation of the film.