Nothing is more explosive than the pre-credits sequences for Fernando DiLeo's crime films and the opening of Milano Calibro 9 is no different. Let's just say when you cross the mob in this film, they will literally blow you up!

An ex-con named Ugo Piazza (The Godfather II's Gastone Moschin) has just been released from jail. His fellow mafia members led by the loudmouth tough guy Rocco (Mario Adorf) are waiting for him. It seems that Milan mob boss Marcado (Lionel Stander) and everyone in his "family" think he stole $300,000 of their money before being imprisoned but Ugo flatly denies it at every prodding or beating by Rocco and his men. 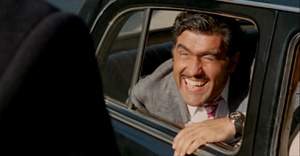 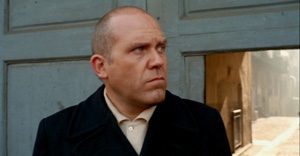 The film revolves around Ugo, but Mario Adorf's Rocco steals every scene. This guy is like a bull in a china shop. He looks like a shorter fatter Italian Clark Gable. Gastone Moschin is great as the stoic, cool Ugo. He doesn't talk a lot, instead he goes for a more subdued style mostly reacting to those around him instead of acting over the top. Nevertheless he really is great in the movie. Ugo goes to visit his buddy Kino (Phillipe Leroy) the only guy he really trusts, to see if he can borrow some money to pay for a hotel room Rocco destroyed during one of their friendly "visits". Not long after Ugo arrives at Kino's flat, Rocco comes barging in once again trying to start trouble. He grabs the money Kino lent Ugo but Kino goes nuts and starts beating up Rocco and his men, then Ugo gets into it. Rocco totally turns a 180 and backs right down seeing he's outmanned. Ugo continues to try to evade the Marcado and Rocco's wrath but he's going to have to pull out all the stops to get free of their neverending harassment.

The story for this film has some really great twists, especially towards the end where you realize the rugs been pulled out from you all along. The last scene is especially memorable because it involves a change of heart by one of the film's toughest characters.