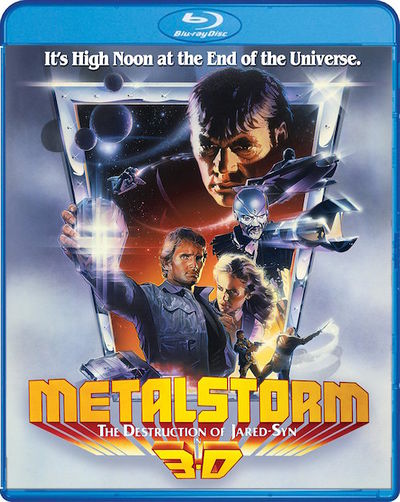 Metalstorm: The Destruction of Jared-Syn is the science fiction battle of the ages with giant Cyclopes and intergalactic magician in this futuristic adventure set on the desert planet of Lemuria. A miner and his daughter Dhyana (Kelly Preston, Death Sentence, Christine) fall prey to the evil dictator Jared-Syn's reign of terror. Dogen (Jeffrey Byron, The Dungeonmaster) the brave peacekeeping ranger, must save Dhyana and the rest of her planet from the of Jared-Syn (Mike Preston, The Road Warrior), his son, Baal (R. David Smith), and the hideous Cyclopean warlord, Hurok (Richard Moll). If Dogen does not find Dhyana in time, she will be sacrificed to Jared-Syn's strange life-giving crystal. Take a space-age journey into the farthest reaches of the imagination with dazzling special effects and a story that will excite fantasy fans of all ages.