Legend of The Wolf Woman/Review 2

Daniella Neseri (Annik Borel) had been raped when she was thirteen. She never got over it and is mentally ill. Now being older she still lives with her father. She heard that one of her ancestors, 200 hundreds years before was a werewolf and got burned at the stake. Daniella looks similar to that woman and she begins to imagine she was reborn again and is a werewolf too (which she isn't). One day her sister Elena Neseri (Dagmar Lassander) comes to a visit with her husband. Daniella takes a peek while Elena has sex with her husband (she's touching herself while seeing it). The husband takes a walk and sees Daniella fully naked in the garden. Guess what? She's kills him by biting him. After that she goes to a hospital and the doctor tries to cure her. 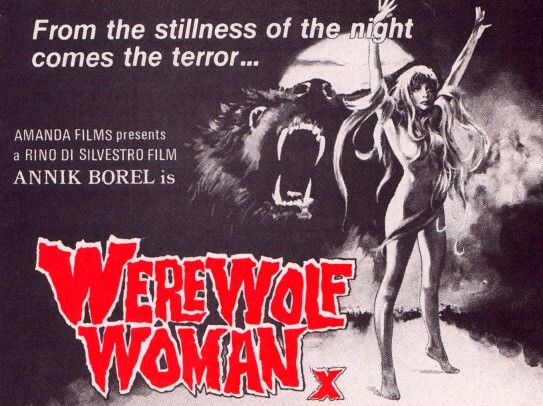 One month later she escapes outta the hospital after some brutal killings. She runs across a barn where a girl is having sex with a guy and the killing spree continues. Later on she meets a stuntman and falls in love. She calls her father to tell him she's cured. Meanwhile, Inspector Modica (Frederick Stafford) investigates and everything seems like a mystery to him. Daniella is at alone at the stuntman's place (he lives in a Western style film resort) waiting for him. Suddenly three guys show up who wants to rape her, and yeah... they do it. The stuntman arrives and sees them, and tries to kill them. Damn, no luck he gets stabbed with a knife into his belly and the three rapists get away. Daniella leaves the house and tries to take revenge on them. She then kills two of the rapists in a junkyard with a crane. The other one she burns to death. Finally Inspector Modica knows where she's hiding (in the woods). Every five minutes you have nudity in the movie (more pussies than tits -laughs-). That was too much for a Horror movie. The genre is Horror but I would call it a Genre Mix Em Up ('coz she isn't a real werewolf she only thinks she is) and you got everything in it, from Nudity, Gore, Horror, Thriller, Giallo, Sleaze, Western and Rape. The opening scene was incredible, Annik Borel dancing naked to the opening credits in a circle surrounded with fire (awesome). It isn't a bad movie, you definitely need to check it out and don't forget the nudity will make you hot!