Invaders of the Lost Gold/Review

Opening Text: JAPANESE OCCUPIED PHILLIPINES 1945....A consignment of gold is being escorted to the coast by a small platoon of Japanese soldiers...

...And out pops a ruthless native tribe who attack the squad of soldiers. Not willing to let the treasured gold fall into enemy hands, the surrounded remaining officers of the platoon agree to hide the treasure deep within a cave of the savage jungle. The officers vow to each other to return to fetch the gold only if they are reunited one last time. 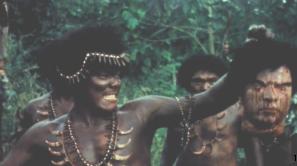 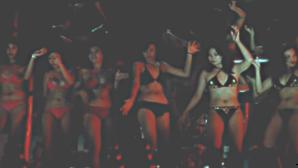 Flash forward some 30 years ahead and some kind of mercenary named Rex Larson (Edmund Purdom) is tracking down the former Japanese officers for the location of the long lost chest of gold. Some of the officers try to attck Rex for refusing to give information (Who end up getting killed by Lex) and some would rather commit seppuku. Rex eventually talks down the other remaining officer, Tobachi (Harold Sakata) into splitting the prize with each other. Wealthy businessman, Jefferson (David De Martyn) will put money up for the voyage which will include a boat,canoes,and porters. But more jungle guides will be demanded for the journey. Jefferson recommends to hire the rugged Mark Forrest (Stuart Whitman) to be the guide which causes Rex to flip out since the two men have quarreled with each other in the past. The last round-up of adventurers includes one of Jefferson's workers, Cal (Woody Strode), Jefferson's daughter, Janice (Glynis Barber) and Mark's former love interest, Maria (Laura Gemser) Who will survive to make it to the gold?

I tell ya, I had high hopes for this one because the first 20-or-so-minutes were quite a blast. The Japanese/Native battles that open the movie were quite entertaining with the gore,action,and funny dubbing. A big smile continued to stay on my face as Cal and Mark Forest make their introductory appearances in a strip joint. Cal gets harassed by a pair of white navy men (Whose "Honky dialogue" is brilliantly reminiscent of blaxploitation films) which escalates into a full blown barroom brawl (Alright, we might have a grindhouse classic on our hands, folks!) Finally, when the boat sets off to it's destination into the jungle, We got Laura Gemser (Laura Gemser!!!) going for the ride! This is bound to be a masterpiece! But....Well, I'll let the director explain his case: 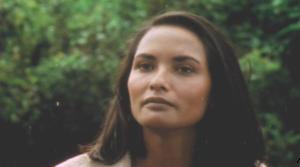 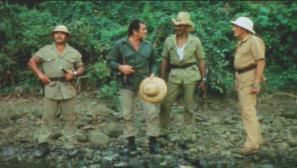 "I was writing [The film] every night before we were shooting it the next day. The script that we had originally was so appalling that we couldn't shoot it! So every night I was re-writing the movie and would have to present the actors with a new script the next morning, and retrospect tells me that this is not the best way to make movies."

No, it's not the best way to make a movie because the film began to slowly and slowly fizzle badly. No action, no suspense, No payoff, nothing. But if you're a fan of "WTF?" type of scenes, you're in store to catch a few of them. Such as the strange and pointless scene of Woody Strode and Harold Sakata viciously attacking each other for no good reason. Which ends with the two of them laughing at each other(?) Or how about the extremely mysterious death-scene of one of the female characters. Truly "WTF?" indeed. If director Alan Birkinshaw really said the truth about the script being worse before what he had shot, then it's too bad he didn't try to complete that version because you honestly can't do much worse than this...But if he happened to be referring to re-writing the first half of the film, then I guess I have to give him kudos for that just because that was clearly the best section of the movie. Too bad film-geeks like us only have to imagine how the rest of the movie should have went.