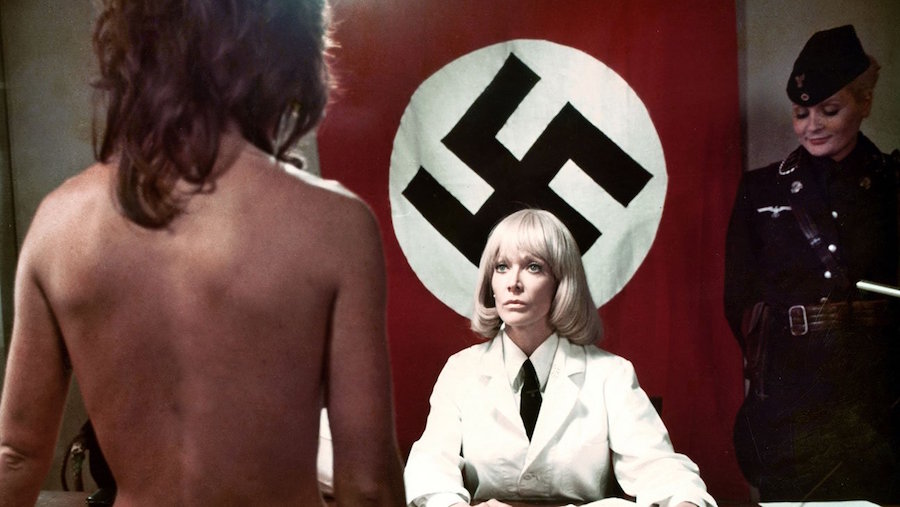 Ilsa (Dyanne Thorne), the evil Nazi commandant of Medical Camp 9, is a woman to be feared. Prone to castrating men who fail to satisfy her and flogging workers who speak to the female slaves, she makes her cruel presence known. On top of her usual brutality, she is also conducting endurance experiments on the women in her camp as a means of showing that women can be trained to handle intense pain. When her latest batch of prisoners decide they want nothing to do with her evil scheme, they plan an escape that will ensure that there will be no future victims of Medical Camp 9.

One of the most infamously edited (sometimes down to 45 minutes!) films ever made, Ilsa: She Wolf of the SS should be THE definitive cult film. Supposedly full of graphic violence and sex, this film has repeatedly been the subject of censorship for more than two decades. Unfortunately (or fortunately, depending on how you look at it) the film barely comes through on its promises and is actually contains less sexual situations than the "adult" films associated with producer David F. Friedman's camp.

Unlike the graphic torture seen in Troma's Bloodsucking Freaks (which Ilsa is unjustly compared to), most of Ilsa's torture scenes are implied. Bloodsucking Freaks still remains the most difficult to endure film I have ever watched and Ilsa pales in comparison. There is some violence and gore, but not enough to match many recent films (or many films from the era it was released as well!) As such, the controversy surrounding the film seems a little extreme, though I'm sure that it was shocking for the time it was released.

Amidst the scant sex and violence is the standard escape from prison plot, replete with a violent overthrow by the prisoners and lots of guards dying in slow motion. There is even the good old "getting revenge on your torturous captors" sequence. The shoot out sequence is decently done though, and they even include a cool "splintery" explosion of a guard tower that rains debris all over the camera.

Dyanne Thorne is a frightening amazon of a woman. She plays a Nazi commandant like she was one and she even looks the part. Although she is amazingly endowed, her hard facial features literally draw your attention away from most everything else. Depending on your own personal reaction to Ms. Thorne, there are three more sequels to this film featuring her, two of which are available in the US (even though her character is killed at the end of the first film!). Fans of the 1987 cult favorite Real Men will also recognize Ms. Thorne as the woman that hits on John Ritter, until James Belushi reveals that she is actually his transsexual father.

There are a two decent bits of trivia in the film. The first is that character actor George "Buck" Flower appears in this film as a German doctor complete with the accent, breaking out of his normal role as a bum in many films (he also essayed an atypical role as a porn film director in Troma's Video Vixens). Although his scenes are few, it is still interesting to see him in varying roles such as this. The second interesting fact is that the film was secretly shot on the sets of the "Hogan's Heroes" TV series. Although no one is seen sneaking out from underneath doghouses, the sets are instantly recognizable.

Ilsa: She Wolf of the SS has been released on an excellent special edition DVD through Anchor Bay Entertainment. The surprisingly good looking film is presented in the 1.66:1 aspect ratio and the source print used for the transfer is nearly immaculate. The film is shown in its uncut, uncensored version for the first time on legitimate US home video. Included on the disc is a trailer and talent bios for the Dyanne Thorne, Don Edmonds (who's bio reminds us that he produced the excellent Tarantino scripted/Tony Scott directed True Romance), and David F. Friedman. Also on the disc is a pretty funny commentary track featuring Thorne, Edmonds, and Friedman (the hardest working man in commentaries today with more than ten under his belt this year alone!), with moderation by humorist Martin Lewis. The four get along together incredibly well and have some great stories to tell, particularly concerning the flippant attitude of the sequel's producers to Don Edmonds reminder that Ilsa was killed off in the first film.