I Escaped From Devil's Island Review

Seen by very few (even at the time of its release), I Escaped From Devil's Island played mostly at Drive-Ins and on the second half of double bills. Released in 1973—a year after football player-turned-actor Jim Brown became a Blaxploitation film star (Slaughter; Slaughter's Big Ripoff), this premium low-budget, self-explanatory-titled prison breakout film contains an intriguing number of twists and turns—all engagingly presented by Director William (Darktown Strutters) Witney.

In 1918 French Guiana, Le Bras (Brown), an inmate at Devils Island, is sentenced to death by the guillotine. Saved at the last minute by a Stay of execution, he is, instead, sentenced to a life of hard labor. Le Bras deems his renewed sentence—especially since survival on the island constitutes a life filled with torture, mutilation and fight-to-the-death matches—as objectionable. Accordingly, he and two prison buddies; pacifist Davert (Christopher George) and “fancy boy” Jo Jo (Rick Ely), plan and execute an elaborate raft-bound escape. 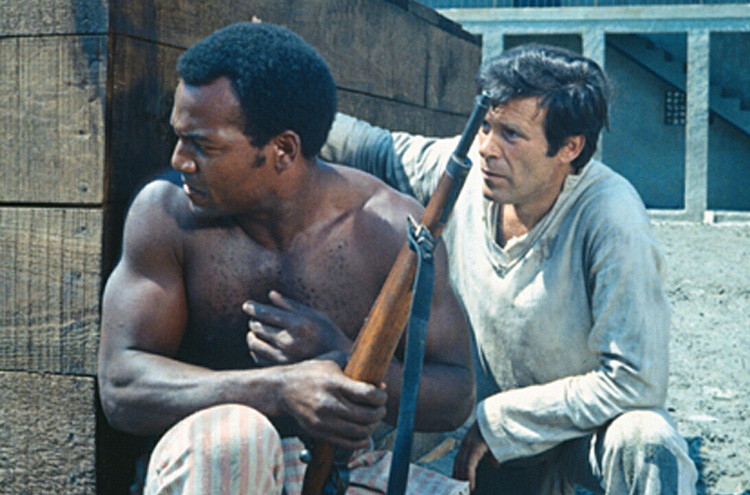 Philippine locations and a cast of locals fill out the background in this tropical tale. So does ostentatious female nudity, an examination of government sanctioned penal institution injustices and an extensive plot-centered fireworks display. A deadly shark attack, a visit to a Leprosy colony, a nature travelogue; exotic birds, fish, alligators, and monkeys, and a pointed political statement; Le Bras informs Devert that he’d rather stay on a deserted island and live like a king than return to France where he’ll just be a black man—and an escaped convict, modernize this dusted off tale (ground covered in the same year’s Oscar winning Patton).

So does a forward thinking plot—a gay character who’s as skilled and ruthless as his heterosexual compatriots, and Brown’s (the ‘70s black man’s favorite action hero) undeniable on-screen charisma. I Escaped From Devil’s Island is guerilla filmmaking “101.” Another notch in the belt of exploitation master Roger Corman.