After being hired by Producer Jerry Gross to come up with an idea for a horror film that wasn't just another monster movie like Dracula or Frankenstein, Director David Durston used two real life inspirations for his new project. The first was a town in Iraq that had been overrun by hydrophobia due to people being bitten by rabid wolves. The other was the Charles Manson murders which had just made the headlines of the news. The resulting effort was titled PHOBIA which was then changed to the more vampire-esque sounding title I Drink Your Blood albeit for no specific reason. 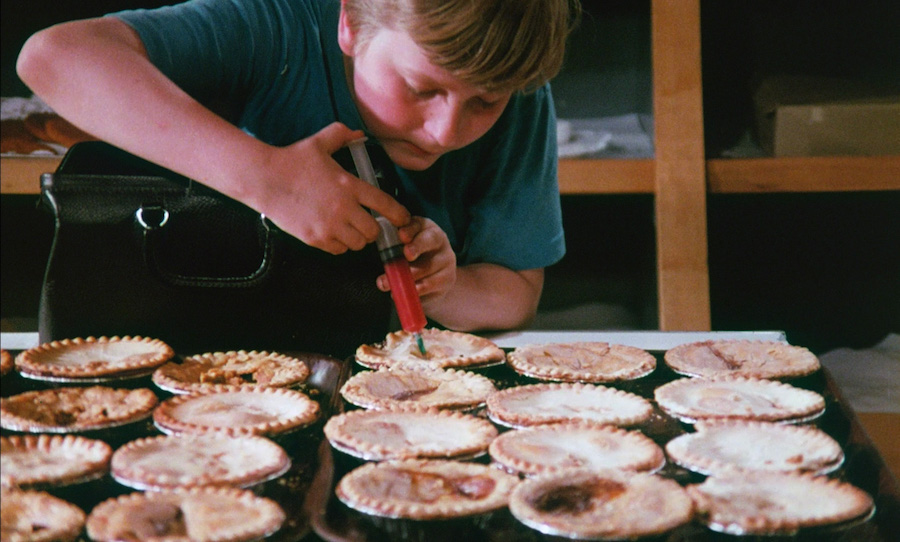 Horace Bones (the charismatic Bhaskar) is the leader of a small satanic hippie cult which is driving through upstate New York. We are introduced to him and his followers who include: Sue Lin (Jadin Wong), Molly (Rhonda Fultz), Rollo (George Patterson), Andy (Tyde Kierney), Carrie (Lynn Lowry) and Shelly (Alex Mann) as they hold a nude nighttime ceremony pledging themselves to the ruler of Hell. While they're occupied with the rituals, a young local girl, Sylvia (Iris Brooks) watches on from behind a tree nearby. Suddenly she is spotted by Horace who has his freaky friends chase and rape her. We later learn that Andy and Sylvia have been secretly seeing each other without Horace's approval. The next day, a young kid named Pete (Riley Mills) and Mildred (Elizabeth Marner-Brooks) a woman who works at the local bakery notice Sylvia stumbling down the road injured from the night before. As Sylvia recuperates, Pete, his Veterinarian Grandfather Doc Banner (Richard Bowler) and Mildred try to figure out who hurt her. She lets them know that it was some crazy hippies that did it.

Due to their satanic van breaking down, Horace and the others arrive in the quiet country town of Valley Hills looking for a place to stay and to get something to eat. They stop at the bakery, are given some pies and are pointed to some old vacant Victorian hotels that were abandoned many years before. They pick one to settle in and proceed to trash it and kill/roast all the rats that have been living there. Later that night, they have another Satanic ceremony this time torturing one of their own, Shelly, by cutting his feet and hanging him up from the rafters. 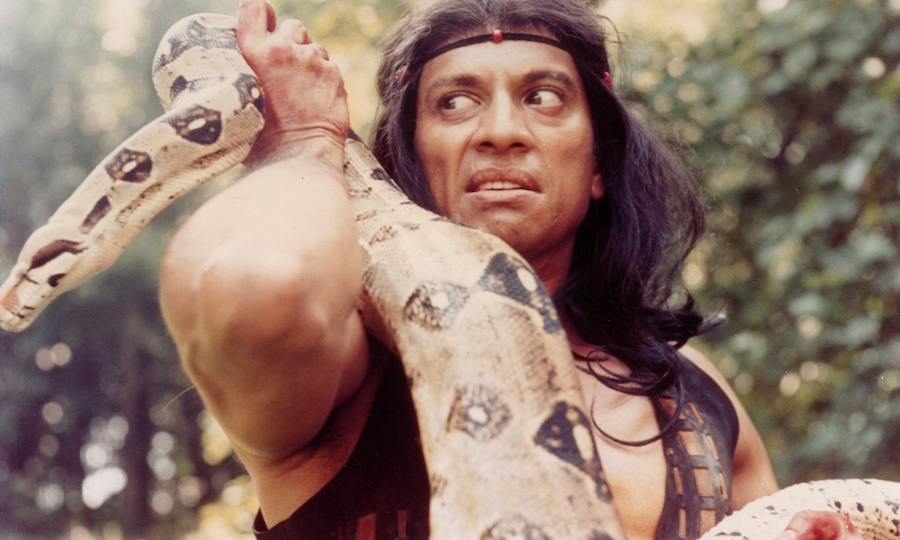 When Doc Banner hears about the town's new residents, he decides to confront them about Sylvia. He shows up at the home armed with a shotgun but is is swiftly beaten up by Horace then given a dose of LSD which makes him freak out! Angered and outraged at what Horace's cult is doing, young Pete decides to get his own kind of twisted revenge. He walks out into the night with the shotgun where he suddenly encounters a rabid dog which he shoots. Then he uses an IV needle to pull blood from the dead animal. His plan is to inject the diseased liquid into some meat pies at the bakery then give them to Horace & Co so they will become sick and die.

Horace and the others hungrily devour the pies and soon become ill and start to show signs of hydrophobia which includes foaming mouths, fear of water and intense sweating. Rollo is the first to go completely mad and he begins attacking everyone he sees. Horace and the others follow, then due to an unseen mishap, more folks in town become affected by hydrophobia and a violent massacre soon erupts with local construction workers attacking random people and wreaking bloody havoc. 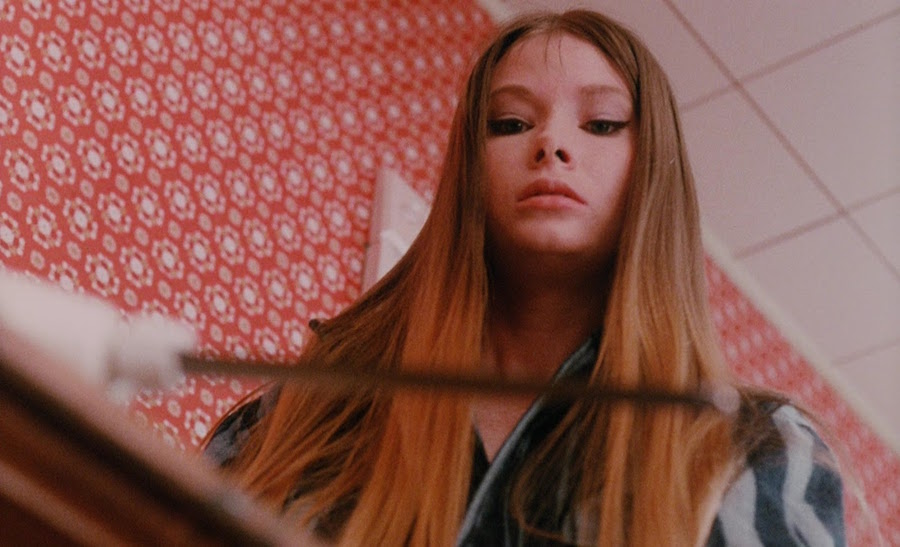 I Drink Your Blood was shot in the small village of Sharon Springs, New York, a mining town that had been mostly deserted after the mineral deposits had run out years earlier. It really made the perfect spot for Durston along with the cast/crew to shoot this kind of crazy movie. Many of the town's buildings were actually set to be demolished but were left standing long enough for use in the film. The music by Clay Pitts works extremely well with its macabre organ stings, wild pulsing beats and siren like noises. It really ramps up the feeling of paranoia and suspense bringing that Manson-esque psycho mood to the already deranged atmosphere.

For a low budget production from 1970, I Drink Your Blood holds up tremendously well and is highly entertaining from start to finish. The movie features colorful characters, an interesting and timely storyline as well as shockingly disgusting FX scenes that will keep your stomach rumbling and your body on the edge of the seat! 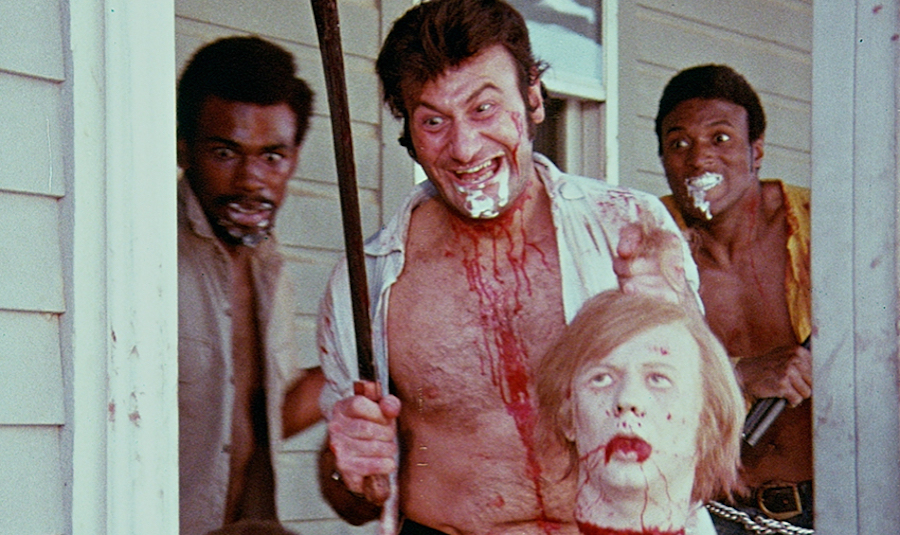 ANIMATED MENU: One of the highlights of this DVD presentation is the main menu which is simply an awesome design that has Rollo and Horace creeping across the screen.

PICTURE: Presented in (1:33:1) Full Frame. The remastered digital transfer looks amazing with minimal artifacts. Colors are vivid and contrasts are rich and dark. This is just a really nicely photographed B-film.

AUDIO: Dolby Digital 2.0: It's not Surround Sound but it will deliver that old school grindhouse movie theater experience.

AUDIO COMMENTARY: An in depth look back at the film with Director David Durston and star Bhaskar who give information on their personal experiences while on set and their thoughts on the film today.

THE I DRINK YOUR BLOOD SHOW: Director David Durston hangs out at his home and interviews stars Lynn Lowry, Tyde Kierney, Jack Damon and the promotional artist for the film. An enjoyable little featurette where old friends talk about working together and what they've done since.

FINAL WORD: I Drink Your Blood is one of our favorite classic exploitation horror films at GCDb so Grindhouse Releasing's Deluxe Remastered Cut is a real treat to be able to experience on home video. If you are a B-movie or cult film aficionado, this is a must own for your collection!