Helltrain (1977, France) is a Nazisploitation film directed by Alain Payet. 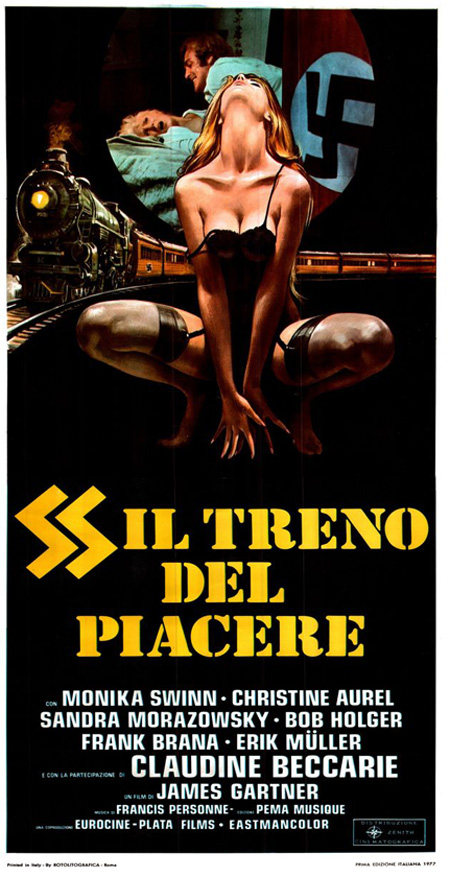 Nazi decadence rides the rails in this period drama set during World War II. Ingrid (Monica Swinn) is a sexy cabaret entertainer who headlines at a private club popular with high-ranking members of the Nazi SS. While Ingrid's father was a philosopher who died at the hands of the Nazi pogroms, Ingrid is determined to survive the Third Reich, and uses her feminine wiles to win the favors of journalists and military figures. In time, Ingrid is drafted into the German army for a special project: the Nazi high command fears morale is on the wane near the Eastern Front, and they want to establish a special "officer's club" to be housed in rail cars that can be driven to the territories where fighting men could use intimate female companionship. While Ingrid is able to round up some acceptable volunteers for her brothel on rails, she's forced to fill out their numbers with a handful of prisoners and political dissidents; one of the captives proves to be Greta (Sandra Mozarowsky), a friend of Ingrid from their days at college, putting her in a difficult situation. However, Ingrid soon has more to worry about when a Polish refugee assigned to work on the train turns out to be affiliated with the underground resistance and leads a rebel attack against the train and its passengers. Helltrain is directed by Alain Payet, though English language prints credit James Gartner. (Rotten Tomatoes)