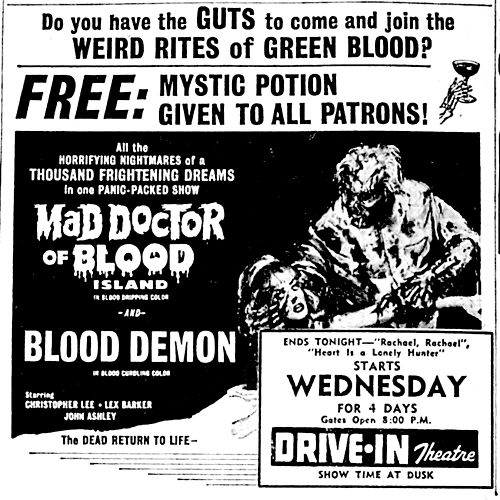 The Green Blood prologue to Mad Doctor of Blood Island invited theatergoers to partake in a bizarre initiation, and each patron was given a free packet of colored liquid. At a certain point, the audience was told to "recite the oath of green blood" as they tore open the little packets and drank the colored liquid inside. By doing this, the viewer could safely watch "the unnatural green-blooded ones without fear of contamination".[2] The prologue was shot at Clark Air Base in Manila using American teenagers.[1]:63–88

Producer Sam Sherman came up with the idea of distributing the liquid gel-packs to the theatergoers, and said years later in an interview that he drank one of the packets, which contained an aqua-colored gel, and it made him sick to his stomach. Nevertheless, Miller (an associate producer of the film) said he actually witnessed dozens of teenagers drinking the stuff in the theaters that he managed in Kansas City.[1]:74

In another gimmick, the camera zoomed in and out rapidly each time the monster killed or stalked someone, a technique that some theatergoers complained made them dizzy and was actually designed to cover up the shoddy make-up effects.[2][1]

In Videohound's Cult Flicks and Trash Pics, "Souvenirs" was #1 on the "Film Gimmicks" list.