GUN AND SWORD: An Encylopedia of Japanese Gangster Films 1955-1980 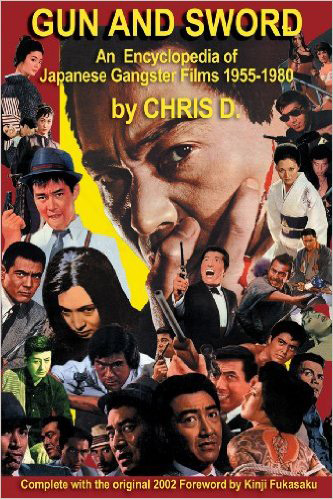 Chris D. began watching yakuza films, writing the initial drafts of GUN AND SWORD, the definitive encyclopedia of the Golden Age of Japanese gangster films, in 1990. In 1997, he traveled to Japan, doing research and collecting illustrations. With 95% of the main text completed in 2002, several publishers were interested but only if the book was cut by 300 pages. It still took another ten years for this astounding reference guide to come to final fruition in its unexpurgated form - a fount of fascinating insights and information for both the seasoned Japanese genre film fan and the curious newcomer. All types of the Japanese gangster movie made between 1955-1980 are covered: the swordfighting ninkyo sagas set in the 1890-1940 period, the modern jitsuroku ("true story") bloodbaths, the matatabi (wandering samurai gambler) pictures, plus the juvenile delinquent subgenres: sukeban (girl boss), taiyozoku ("sun tribe") and bosozoku ("violent tribe" or biker). All movie genres deserve ardent completists as well as astute critical observers. With Chris D. the reader gets both. His informed passion matches an eagle's eye for small but critically important details and cinematic-literary-historical-industrial connections. Rich in primary, groundbreaking research, GUN AND SWORD is an invaluable reference." (Goodreads)