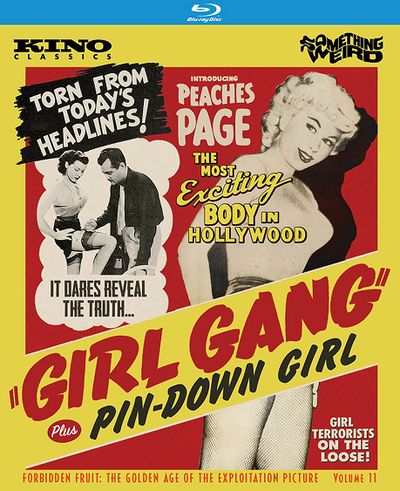 By the late 1940s, exploitation producers such as George Weiss (Test Tube Babies, Glen or Glenda?) drifted away from the pseudo-educational framework of the genre and began producing risqué crime melodramas. No films better represent the "mainstreaming" of exploitation than Girl Gang and Pin-Down Girl, and no actor was more suited to such low-grade potboilers than deadpan baritone Timothy Farrell. In Girl Gang, Farrell is a small-time mob boss who feeds dope to high school girls hungry for kicks. A return to the gymnasium setting of Weiss and Farrell's The Devil's Sleep, Pin-Down Girl stars Peaches Page as a woman caught in the vice-riddled world of female wrestling. Girl Gang was mastered in 2K from the original 35mm negative; Pin-Down Girl was mastered in 2K from a 35mm re-release version (The Blonde Pick-Up).