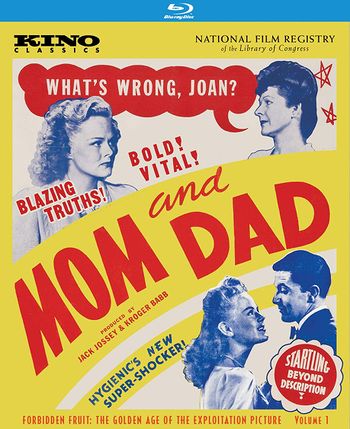 In the 75 years since its initial release, Kroger Babb’s Mom and Dad has achieved mythical cinematic status. It was a film that, during the height of the Production Code, not only dared to address issues of venereal disease and unexpected pregnancy but presented graphic footage of bodies scarred by syphilis and multiple unobstructed views of childbirth. So sensational was the film (and so different were the audiences’ motivations for seeing it) that screenings were commonly segregated by gender. Furthermore, screenings were presented with a live sex hygiene lecturer, who underscored the film’s educational value and sold informational pamphlets. It became one of the highest-grossing films of the 1940s, yet for decades has been unavailable for screening. The original negative has succumbed to nitrate decomposition, but this authorized presentation has been mastered from three separate 35mm elements. It is presented with a wealth of supplemental material to illuminate why Mom and Dad became such a phenomenon, and continues to fascinate audiences even now.