After the successful early kung fu films of Jackie Chan like Snake In Eagles Shadow and Drunken Master, several Asian martial artists began to try to copy Chan's style of humor mixed with action. Billy Chong who stars in this film is essentially the best of this group. Chong creates his own entertaining character portrayal and becomes a real kung fu dynamo as the film's story unfolds. Director Chung Sun brings a masterful visual style to the film through his camerawork. The many colorful and interesting set designs add another layer to the film and give it a unique spaghetti western meets martial arts look.

At the opening of the film, we meet the head of the Manchu lobbyists, Ni Sin who is waiting for a Ching representative named Ding Wei Chung, who never shows up to his "peace meeting". Ni Sin becomes enraged and vows he will find Ding and kill him for breaking his promise. At a farm in the countryside, a young farmhand named Yi Min (Billy Chong) washes a horse belonging to one of his father's residents. Yi Min is young and full of energy and this gets on his father's nerves. When Yi Min inquires about the horse's owner, his father tells him to shut up and to mind his own business. Yi Min ignores his dad and goes to see the mysterious stranger by bringing him some water. When he gets to the stranger's door, he is shocked when the stranger confronts him. Yi Min's dad tells him to leave the stranger alone. Yi Min is curious about this man, but he leaves and does his chores.

One night, a group of Manchu rebels storm the farmhouse and attack the mysterious stranger as he's leaving. The mysterious man is none other than Ding Wei Chung, who is on the run with the Emperor's seal. Ding and Yi Min fend off the attackers, cutting off their long ponytails with knives and sickles to show them that the Manchu dynasty is over. In this battle we get our first look at the style of Director Chung Sun who shoots some really amazing slow motion action sequences involving alot of acrobatics. Ding Wei Chung leaves the farm. The next day Ni Sin and a fellow Manchu arrive at the farm. When Yi Min sees them he gets angry and tells his father that they are rude and dont belong there. Ni Sin strangely doesnt kill Yi Min, instead he leaves declaring "he needs no more trouble than he already has". Yi Min decides to follow Ding Wei Chung himself and warn him about his impending doom. He leaves in the middle of the night. 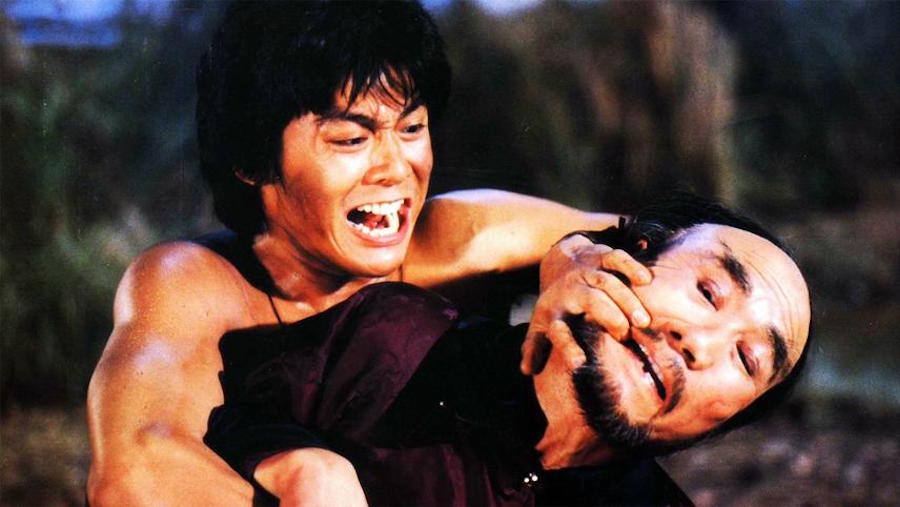 Yi Min arrives in a small town where he captures some bandits who are looting there. When he brings them to the town's mayor, Yi Min is asked if he'd like to stay in a nice home with everything he wants at his disposal. Yi Min knows therres a catch, and there is: the mayor asks him to marry his daughter. Yi Min meets his daughter, a pretty girl who trains eagles. Yi Min thinks this is very strange and explains to her that he has to leave the town. She tries to stop him, but he takes off into the night once again, on the trail of Ding.

Meanwhile, Ni Sin brings in a blind mandolin playing psychic to help him track down Ding Wei Chung. When the psychic explains that Ding has a special purpose and is a holy being, Ni Sin gets pissed and tells his men to get rid of him. Yi Min finally finds where Ding is hiding out, a Buddhist temple out in the mountainside. Ding sees Yi Min and tells him to leave, but Yi Min tells him he wants to help him and the Ching Dynasty get rid of Ni Sin and his army. Ding begins to get annoyed by Yi Min and ties him up for awhile to calm him down. Ding then decides to teach Yi Min the secret arts of combat based on Sun Tzu's writings and the conceptual Earth, Wind, Fire, Mountains lesson. While in town, Ding meets a crazy guy he calls "Little Bandit" who becomes a sort of his sidekick. Little Bandit goes to the Manchu's headquarters and tells them he will find out where Ding Wei Chung is in return for some money. The Manchu's give him money for his services and on the way out we get a laugh as Little Bandit tells the rebel "I may not come back!". The Manchu's end up beating Little Bandit up but he he makes it back to Ding and Yi Min to tell them what happened before he dies. Ding Wei Chung proclaims Little Bandit a hero for helping him out and they bury him in a touching ceremony. They now want their own revenge on Ni Sin and the Manchu for this disgrace!

The climactic ending of the film has Yi Min and the pretty female Eagle trainer taking on Ni Sin's thugs while Ni Sin himself confronts Ding Wei Chung at the abandoned Buddhist hut. Ni Sin and Ding have a brutal fight, but Ni Sin comes out on top and leaves Ding nearly dead. When Yi Min arrives and sees Ding laying helpless, he wipes Ding's blood on his chest and yells to Ni Sin that HE is Ding Wei Chung and Ni Sin hasn't killed him YET!. This battle sequence is breathtaking as Yi Min uses all his martial arts skills learned from Ding to take on Ni Sin while the Eagle training girl helps by distracting Ni Sin with her majestic birds. The final shot of the film will be burned into your mind after you see it.