Exploitation Cinema: Where Time Began/Encounters with the Unknown 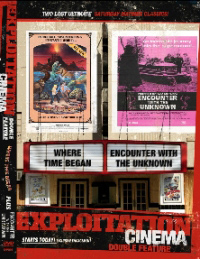 Where Time Began - British vintage matinee idol Kenneth More stars as Otto Lindenbrock, a professor who decides to go to the center of the world to check out the sights. He encounters a big funky turtle, a groovy mushroom, a funky monkey, and some massive dinosaurs in this film made by horror mastermind Juan Piquer Simon (Pieces, The Pod People). This is the longer Euro-cut!

Encounter with the Unknown - Rod Serling narrates a shocking trilogy of UHF television level thrills! A vengeful mother out to get payback for her son's death; an inbred son's dog that goes to hell; a dead girl's ghost that hitches a ride…All 3 terror stories are told and then retold at the end for those people that didn't get the punch line the first time.