This reader was lucky enough to grow up in the Halcyon horror “days” of the mid-70s to mid-80s. So it should come as little surprise that my goal in life was to become a special effects makeup artist. I was lucky enough to have the coolest mom in the world who would take me to any and every slasher film to hit the silver screen. She even went so far as to argue with the theater manager about letting me in to see Maniac despite it being “No one under 17 will be admitted”...(God bless that special lady!) Back in a time when VHS tapes were barely being discovered it was actually possible to proudly proclaim having seen every modern horror movie around!

With all this in mind it should come as no surprise that I am fascinated by an 80s slasher that somehow escaped through my vigilante efforts back in the day. The last few months have proved particularly fruitful on this front with the discovery of such obscurities as the overlooked Santa slayer TO ALL A GOOD NIGHT (directed by David "Krug" Hess!), the campus massacre Girls Nite Out and EVIL LAUGH, which I’m about to review here... 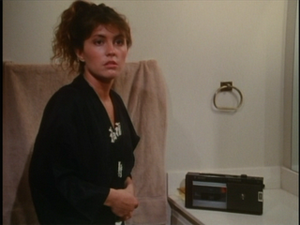 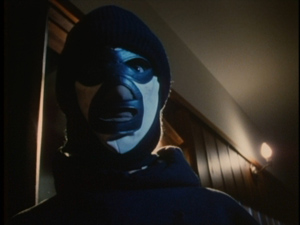 The film arrived very late in the game, 1988 to be more specific, long after the slasher luster has tarnished and turned the horror genre’s finger green. The Evil Dead and A NIGHTMARE ON ELM STREET series were in the midst of creating more surrealistic, mind-bending ways to terrorize its audience. So its ironic that its the anachronistic nature of EVIL LAUGH that offers its two most appealing qualities.

The setting is an old, abandoned structure that had previously been an orphanage. Child molestation accusations lead to a humiliated staff doctor committing suicide, the residents (particularly the children) being slaughtered and the accused going up in flames while he torches the building.

Now, several years later, a group of medical students arrive to help a Pediatrician friend help fix up and transform the facility into a children’s hospital; unaware that he’d been slained at the hands on an unseen, giggling killer. As the “kids” set about their efforts (naturally leading to your standard-issue, Gouda-cheese-potent montage sequence of them working/dancing/singing in accompaniment to some New Wave-knockoff), they start being systematically offed one by one.

Its clear from the above synopsis that EVIL LAUGH doesn’t exactly re-invent the wheel when it comes to the slasher sub-genre. There are elements, in fact, that are laughably familiar with everything from the clueless cops to the self-consciously creative kills to a “youthful” cast starring guys with receding hairlines (including Scott Baio’s brother, Steven, who looks more like a hard-living uncle) and girls with thousand-yard-stares (In an ironic twist only real-life could offer the lead good girl is played by future 90s-porn-icon Ashlyn Gere, credited as “Kim McKamy”). 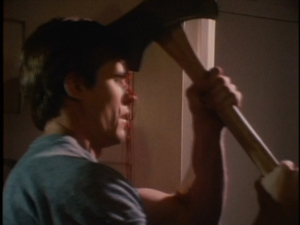 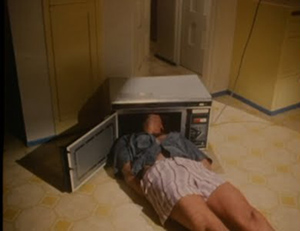 While the film may sound as fresh and original as a Presidential speech it does actually be ahead of its time in one very interesting aspect -- It introduces the whole Meta-Horror thing a few years before even the overlooked THERE’S NOTHING OUT THERE and a decade before the first SCREAM film firmly established it in pop culture. Appropriately enough, its the annoying prankster character who runs around trying to warn the others of their impending doom. On a more smaller scale, EVIL LAUGH also features the “head nuked in a microwave” kill, most memorably used in the The Last House On The Left remake. (Although even the slightest attempt at believability -- As heavy-handed as the latter was with its “bad wiring” explanation it at least tried -- tossed out with the killer sticking the victim’s head through the open door and plugging in the device.

The opening and above-mentioned scene are pretty much the highlights when it comes to gore. The remainder of killings are either bloodless or occur offscreen. The identity of the killer is decently handled and a bit of a surprise.

The real payoff, however, comes during the last scene when the prankster pulls a “joke” on the surviving girl, cruelly posing as the killer and pretending to attack her...His amusement is short-lived when she snaps and kills him, leaving a pricelessly stunned expression on the dumb ass’ face.