Difference between revisions of "Eros in Hell" 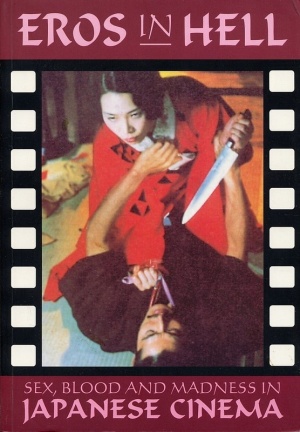 Eros in Hell: Sex, Blood, and Madness in Japanese Cinema provides possibly the best survey to date on the Japanese "pink" film genre. Author Jack Hunter begins with Tetsuji Takechi's Hakujitsumu (aka Daydream) in 1964 and follows the development of each subsequent production, its directors, distributors, and production companies--an in depth genealogy to say the least! Hunter accounts in his foreword, "Eros in Hell is a book about sex and violence; it is about a cinematic zone where these primal impulses, each aware of its own complicity in the other's existence, collide and generate a delirium whose intensity is often virtually psychedelic in its effect upon the viewer."

In addition to an extensive catalog of pinky films, actors, and directors, Hunter also provides an in depth analysis of the genre's evolution from its inception in mid-1960s through to its most recent contemporary example. According to Hunter, censorship played a major role in its development. Where European and American directors had few boundaries as to what could be shown on screen, Japanese underground directors were given everything but genitalia. This limitation forced these directors to reassert their creative impulses in ways other than the mere presentation of close up penetration.

This book not only provides a survey of the genre, but gives amazing accounts of the stories behind each film. Also included are survey of works by legendary directors such as Koji Wakamatsu, Hisayasu Sato, as well as interviews with Takao Nakano. This volume features a wide selection of black and white production stills from many of the genre's best known films. At 185 pages, this book is highly readable and suitable for browsing.