Dolls of the Shogun's Harem/Review

Beautiful flower fields, shogun’s luxorous inner palace, young topless women pulling the rope for the fun of one man... Obviously an early 70’s Norifumi Suzuki entertainment piece, a film from the time before he filled the screen with modern day girl gangs, long before he went truck crazy with Bunta Sugawara, or had discovered the cheesy ninja movies of the following decade. But wait, Dolls of the Shogun’s Harem is a 1986 film. What the hell? 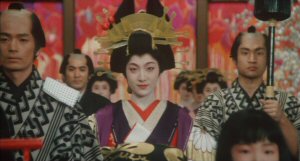 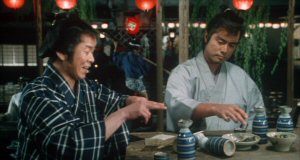 Watching Dolls of the Shogun’s Harem may bring up some nostalgic feelings. This is the kind of movie Toei was churning out during the golden years of their pink cinema. Suzuki himself directed a very similar production in 1972, Lustful Shogun and His 21 Mistresses. A few years later Suzuki, the uncrowned king of Toei pink, left the genre to become a highly succesful mainstream director. Dolls of the Shogun’s Harem is his return to majestetic, pink coloured period drama.

The first 5 minutes offer a perfect introduction to the film. The shogun’s rabbit hunting afternoon is interrupted when he spots a beautiful woman bathing under a waterfall. He chases the scared woman through the blossoming flower valley in a colourful scene that is borderline corny, and captures her at the top of the hill. As he takes the woman by force the camera pans back slowly, ultimately to ending up to several kilometer’s distance and revealing the surrounding mountain landscapes. Catchy theme song accompanies opening credits.

Suzuki and Toei always knew how to make grand scale exploitation with limited budget. But Dolls is more restrained – some have even called it realistic, although I wouldn’t go quite that far – than the genre’s classic achievements from the previous decades. Some of the edge has been lost, no doubt. Sex is as plentiful as before. But the director has learnt some new tricks as well. Easily the most impressive element in the film is the terrific soundtrack, heavy on soft rock. 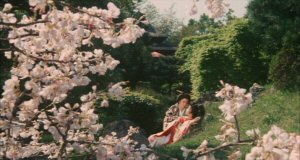 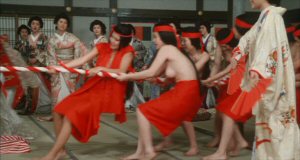 Action is sparse. There is only one brief sword fight in the film, plus a highly stylized torture scene that brought Dario Argento’s art of killing to my mind. It is the sex, talk and dazzling dresses that dominate the film. An decent enough if not overly thrilling mix, but at 115 minutes the film could do with some trimming. This was not left unnoticed by the international distibutor, who managed lose 17 minutes of footage before the subtitles were attached to the print. Good idea, only that the film went from lengthy into shreds; many of the best scenes were removed, continuety problems appeared, and large proportions of the fantastic score were lost.