After Fritz The Cat set the exploitation-world ablaze, it was inevitable that more follow-ups or other inspired adult-animation motion pictures would soon appear. Roger Corman, and New World Pictures, would look to cash in with "Cheap", the working title for what would eventually become Dirty Duck (check the Fun Facts section to see what went wrong with the original title). Filmmaker and animator, Charles Swenson would direct the feature. Swenson, not only having already been a collaborator with Corman and New World for doing the opening animation sequences for the Candy Stripe Nurses trailer, but he had also done animation work for the Frank Zappa project, 200 Motels. Which, in turn, featured the members of "Flo & Eddie" (consisting of band-members, Howard Kaylan and Mark Volman). All would unite for one of the more strange and sex-filled animated features ever. 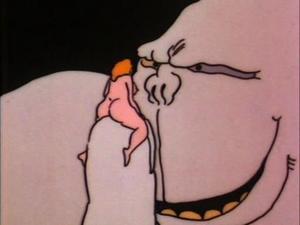 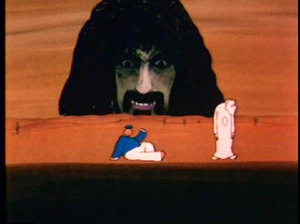 Willard Eisenbaum (voiced by Howard Kaylan) is a day-dreaming insurance worker who thinks he's about to have the day of this life when he expresses his love to a fellow worker. When Willard's intentions fail to materialize, he's told by his boss to investigate an insurance claim from the elderly Martha (Lurene Tuttle). When Martha suddenly kicks the bucket during Willard's visit, her will says that the one who causes her death (confirmed by a Ouija board) will have to overlook her duck...Make that a grown, talking Duck! (voiced by Mark Volman) Within seconds, both Willard and The Duck are hitting the streets, brothels, and tons of indescribable locations to get laid. By the time the film ends (Which is rather quickly) Willard will appear to be in love...But with whom? Or What? 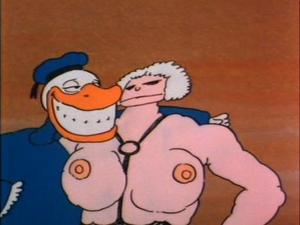 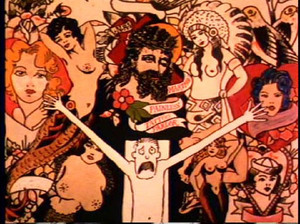 What really stands out in this film are the songs made by Flo & Eddie (which, to this day, still haven't been released). Tracks like "Cheap" and "Nothing But a Good Duck" really linger in the mind afterwards and seem to make the film more memorable than it really is. I say that because I have mixed reactions to the rest of the film. I was only into the movie during the opening scenes where Willard displays his loneliness and where his crazy imaginations run wild. But the biggest highlight for me was the lengthy scene where the duo are stuck in a desert. The film finally seemed to have found it's rhythm with the humor and it's stylized pranks (it should be noted that the humor still tends to be very racy in these politically-correct times, by the way) but then everything falls back into the muddled mayhem that preceded these good parts. But overall, at a short running time of 75 minutes, there really isn't enough room for major complaints. The music, the rugged animation style,and it's reckless attitude should secure Grindhouse patrons well enough for some wild-night viewing.